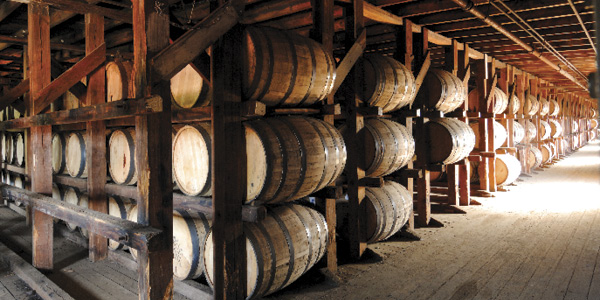 Outdated storage systems and technology can leave those involved in the business of making popular alcohol with a hangover that never seems to end. With the booze business booming, Buffalo Trace Distillery knew it had to update its storage and retrieval practices if it wanted to keep product flowing on time for its customers.

Buffalo Trace Distillery, a family-owned company based in Frankfort, Ky., dates back to 1773. As a fully operational distillery producing bourbon, rye, and vodka on site, the company has garnered more than 300 awards—including Brand Innovator of the Year at the Whisky America Awards 2015—for its wide range of premium whiskies.

With nearly 250 years of experience to call upon, Buffalo Trace knew it was time to update its systems to stay ahead of the game. The company was using 240,000 square feet of storage space spread across seven decentralized locations and one contractor location. Most of the space consisted of bulk storage with limited racking systems. Pallets weighing 2,000 pounds were often stacked two-high, which resulted in damage if they sat too long.

The company selected and shipped most of the inventory from its main 51,480-square-foot distribution center (DC), where product tended to get in its own way before it was loaded on a truck.

"The same pallet could move nine times from the production line to the trailer outbound to the customer," says Charles Harrison, distribution and traffic manager for Buffalo Trace Distillery. "Moving pallets from second-floor storage via floor openings to the loading dock was not efficient in terms of time, cost, and risk of damage during movement."

A high-volume day meant moving even more product around to replenish inventory at the main DC's prime restocking locations, generating more traffic and confusion. Buffalo Trace Distillery had to ensure these hiccups didn't keep customers from receiving product on time.

"We also had opportunities to talk directly with plant managers operating Westfalia's AS/RS," he adds. "Discussions included Westfalia's ability to plan, construct, maintain, and provide customer service support, all of which were favorable."

Westfalia Technologies, based in York, Pa., provides automated systems for plants, warehouses, and DCs in a variety of industries, including food and beverage, chemical, industrial, and print and publishing. The company combines software and automated equipment to deliver turnkey solutions that meet specific operational needs. In addition to AS/RS, Westfalia's solutions include conveyors, case packing equipment, and the Savanna.NET warehouse execution system (WES).

"Buffalo Trace Distillery initially planned to build a standard warehouse using a conventional rack solution," says John Hinchey, vice president of sales for Westfalia Technologies. "After discussing the potential shortfalls of that plan, however, the company quickly realized the increased efficiencies it could gain by utilizing Westfalia's AS/RS and WES."

Distilling and distributing alcohol can be tricky and complicated, so Buffalo Trace Distillery had concerns that an automated system might not meet all its needs.

"The spirits industry requires distillers to track product by lot code and date," says Harrison. "The systems and processes they employ must provide immediate visibility and inventory information—including inventory tax status, and the ability to store tax-paid and in-bond material in alternating locations without co-mingling."

Drinking It All In

Westfalia made sure it had a thorough understanding of the distillery's operation so it could deliver a system that met all the regulatory and efficiency challenges.

"Order accuracy, real-time inventory reporting, and the ability to rapidly turn trucks are key performance indicators that must be optimized to meet the spirits industry's customer service demands," he adds. "Westfalia's AS/RS, combined with the Savanna.NET WES, provides Buffalo Trace Distillery with these capabilities, as well as efficient order processing to ensure the right products are retrieved at the right time to satisfy outbound orders."

Installing the AS/RS has significantly improved Buffalo Trace Distillery's internal distribution stream. The company now produces, moves, and tracks inventory via pallet, with barcode license tags attached. A trailer moves pallets from the production line to the DC's inbound dock, then forklifts move the produced inventory pallet across the 25 feet between the trailer and the AS/RS induction conveyor. The conveyor transports and delivers the pallet to one of 10,619 pallet storage locations. The pallet is positioned on its own platform, eliminating previous risks associated with double-stacking the pallets in storage.

When a customer's truck arrives at the loading dock to pick up an order, the dock coordinator inserts the trailer number and customer order number to the specific loading dock door into the warehouse management system, which automatically generates the commands to the storage system to select all full pallets associated with the order. The AS/RS always selects the oldest inventory, ensuring first-in/first-out processes are observed, resolving another problem that existed under the old system.

A crane transfers pallets from the storage location to a transfer car on the outbound conveyor. The transfer car can move two pallets at a time to three of 20 customer order staging lanes in front of the assigned outbound dock. Dock operators load and scan the pallet license plate from the staging lane, load the trailer, and close and seal the trailer doors after the driver signs the bill of lading.

A radio frequency pallet barcode both within the AS/RS and by the forklift operator controls all pallet movements. Physical and system scans mirror one another during each transaction associated with the pallet to ensure shipment accuracy through a system of checks and balances.

Westfalia helped Buffalo Trace Distillery install the new system while maintaining a goal of not dropping a case. To achieve this, all existing inventory was entered into the system alongside new inventory without missing or delaying a customer order.

Another bonus: The new system unites the distillery's distribution operation into one 84,000-square-foot AS/RS facility, reducing overhead in many areas, including transportation, labor, and damaged product.

"The AS/RS significantly reduced our footprint, centralized operations, cut labor and equipment costs, and enhanced inventory security—all while reducing the number of transactions in the process," Harrison says. "The end result is a better product that customers receive quicker."

Sazerac Company, Buffalo Trace Distillery's parent, plans to implement similar systems to improve efficiency at some of its other subsidiaries. It is already implementing a second AS/RS at its Glenmore Distillery in Owensboro, Ky.