In the face of trade uncertainty and disruption, importers stay resilient.

the risk of trade disruption wasn't at the top of your mind before, that has probably changed since the outbreak of the new coronavirus in late 2019. As the epidemic forced factories in China's Hubei province to shut their doors, companies around the world began to feel the pain in their inbound pipelines.

In early February 2020, for example, automaker Hyundai temporarily stopped production at its South Korean factories for lack of necessary parts from China. And U.S. technology firms such as Dell, HP, and Qualcomm saw their supply chains threatened as contract manufacturers in and around the city of Wuhan halted production.

The coronavirus is just the latest in an endless string of disruptions that can pinch off supply lines for companies that import materials, components, or finished goods. The 2011 earthquake and tsunami in northern Japan also caused trouble for businesses that didn't have alternative sources for essential goods. Recent trade disputes—with their on-again, off-again tariffs—created uncertainties that forced some U.S. companies to rethink sourcing strategies.

And at all times, hazards such as earthquakes and hurricanes, fires, labor disputes, and supplier bankruptcies threaten to interrupt supply chains.

After companies adopt just-in-time processes, consolidate supplier networks, and expand their supply chains into new parts of the world, those practices leave supply chains more fragile. "Anything from a natural disaster to a fire ultimately affects them in a more dramatic way," says Lee Galbraith, managing director and founder of Arlington, Virginia-based scoutbee, which offers a supplier discovery platform that uses big data and artificial intelligence (AI).

If a business doesn't have alternative suppliers ready to step in, a disruption can do serious damage. "There's a difference between knowing about a second source and having a second source," Galbraith says.

Before making plans to survive a disruption, though, a company must first understand which supply chain risks it faces and where they are. To achieve that, it must be able to see, in detail, what's happening in its supply chain, says Greg Schlegel, executive in residence, supply chain risk at Lehigh University in Bethlehem, Pennsylvania, and founder of the Supply Chain Risk Management Consortium.

"If you don't acquire good visibility, what you don't know about your supply chain can and will hurt you," Schlegel says.

The disaster that blindsides you won't necessarily be an epidemic or a hurricane. All it takes to throw an operation into panic is a Friday afternoon phone call announcing that a key supplier is going out of business.

To avoid such rude surprises, smart companies subscribe to technology-based services that alert them to events around the world that might interfere with their supply chains. "These services watch the world every 60 minutes, capture all the risk events—small, medium, and large—digitize those risk events, and then send an electronic bitmap to subscribers," Schlegel says. Users lay those maps over digitized maps of their own supply chains and look for overlap.

Companies such as IBM, Cisco, Coca-Cola, and Bayer Crop Science put these tools at the center of their risk management strategies. Some operate 24-hour "war rooms," where they track all their inventory against the map of potential disruptions. "If there is an area impacted by the coronavirus, for example, where an entire city region is locked down—they know that sooner than their competitors," Schlegel says.

When a risk management platform shows an imminent trade disruption on the horizon, a company's first response should be to gather all the relevant facts. Which suppliers are affected? How much inventory does the company have on hand and en route? How soon before supplies run out?

If inventories are likely to run out soon, the company shifts into crisis management mode. "They get on the phone, scan warehouses and distribution centers, and ask how to get additional parts," Schlegel says. "People work 24/7 until they resolve the issue."

Early warning of a potential disruption provides a competitive edge. Take the case of a customer whose supplier's supplier has a factory fire. The first-tier supplier has just enough inventory on hand to fill orders for the next three weeks. If you learn about that problem before other customers do, you can place a new order immediately, before supplies run out.

A quick response also pays off when booking transportation in the wake of a disruption. Consider an importer whose supplier in China has shut down due to the coronavirus. The company might locate an alternative source in Thailand or Vietnam. It will need to book transportation from that new location—but so will many other shippers.

"The sooner you can push your logistics provider to block out space, the better," says Alan Baer, president of OL USA, a freight forwarder based in Westbury, New York. Third-party logistics (3PL) companies can use their existing relationships with carriers to find capacity. "If you think you will need to supplement ocean transit with air transit, the sooner you're able to put that forward, the better," Baer adds.

A 3PL can also suggest the most economical ways to route freight quickly, to compensate for the delay caused by a disruption. Take a U.S. company that usually ships by ocean directly to the East Coast. If inventory is running low, it might get product faster by shipping to the West Coast and then transloading cargo from 40-foot ocean containers to 53-foot domestic containers for transportation by truck with team drivers.

Expedited truck transportation might increase costs, but it could be worth the one-time financial hit to get product to its destination on time.

When a trade disruption is geography specific—as in the case of a natural disaster, labor dispute, or epidemic—seeking an alternative source elsewhere in the world is an obvious strategy. It's not always an easy strategy to implement, however. Companies in some industries, such as high tech, pharmaceuticals, medical devices, and aerospace, work so closely with their suppliers that it's hard to make a switch. In some cases, though, an existing supplier might fill orders from a different location. "Then you don't have to re-onboard your contract," says Vakil.

When switching to a new supplier is feasible, a company might employ a system such as scoutbee, which uses data on supplier capabilities and buyer needs to suggest appropriate matches.

The procurement professional would log into scoutbee and enter data about needed parts or materials, current suppliers, and any alternatives for which the purchaser was aware. "Then we use AI to identify other potential suppliers around the world that could do the same thing," Galbraith says. The procurement professional uses that short list of vendors to conduct evaluations and negotiations.

When done manually, that kind of supplier search can take from six to 18 months, depending on the product specifications. "We can do it in four to six weeks," Galbraith says. 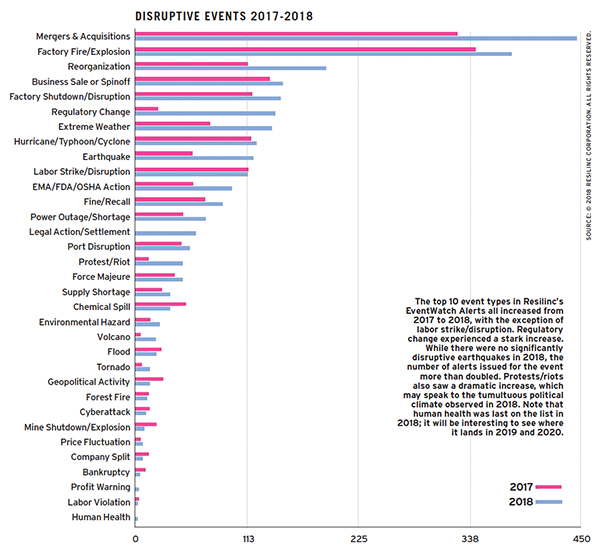 When you hope to avoid supply chain disruptions, having a risk mitigation strategy already in place is the best strategy of all. Instead of scrambling for alternative suppliers, for example, a company could pull up a list of pre-vetted backup vendors and start making calls.

"The best way to do that is to identify other suppliers they can go to in a short time frame," says Galbraith. After all, by the time a disruption emerges, everyone affected by that event will be competing for product from alternative sources. "It's a matter of who gets there first, because there's only so much capacity in the world," he adds.

To be sure that backup vendors are ready to help in an emergency, you might cement those relationships by procuring from multiple sources in multiple regions, as a matter of course.

"It's important for importers to take a step back when they can and ask, 'How do I buy a little bit from four countries instead of one, or go from two to four, or from one to two?'" says Baer. Product from country B might cost more than product from country A, but if that strategy guarantees an uninterrupted supply, it could save money in the long run.

Sophisticated companies that have digitized their supply chains study them periodically for potential choke points. Then they perform "what-if" exercises, much like war games, to test possible responses to various disruptions. "They build what we call risk response plans," says Schlegel. "If this happens, then we will do that." When one of those disruptive scenarios actually occurs, someone pulls out the plan and everyone gets to work.

Hundreds of companies offer software that buyers can use to model their supply chains and run scenarios. It's also possible to use simpler tools, such as spreadsheets.

A company with good information about its supply chain, a strong mitigation strategy, and the ability to put its strategy into action should be well positioned to recover from any supply chain disruption.