What Are The Possibilities? 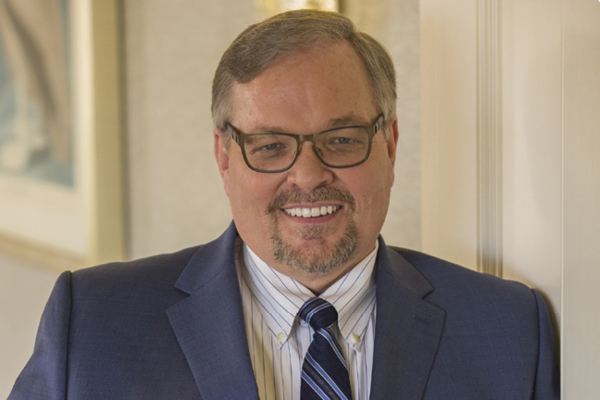 As chief technology officer at Pilot Freight Services, Mark Baker's mission is to lead the company through a digital transformation. "Like a lot of companies, Pilot has had some excellent technology solutions but still runs legacy back office systems using COBOL, FORTRAN, and RPG," he says. A business that relies on mainframe-era technology can't easily profit from modern innovations such as cloud computing and the Internet of Things.

And a company relying on legacy systems can't continue to grow at the rate that Pilot has seen in recent years, says Baker, who joined the company in 2018. Now he's working to steer Pilot into the 21st century, and to help complete the transition from a family-owned firm to a business that could one day go public.

Inbound Logistics recently caught up with Baker to learn about the forces that shaped him as a logistics technology leader and about his current activities.

IL: How have you been spending your time at Pilot since you arrived?

As in any position at this level, I spent the first three months assessing my team, the available resources, and the applications the company was running, among other things. Today, I spend a lot of my time focused on three key areas: the enterprise applications group, which does much of the development; IT operations, which manages the infrastructure; and project management. I also interact with our business groups to understand their fast-paced, constantly shifting needs.

Because the domestic home delivery market makes up a large portion of our business, we onboard many e-commerce clients. Implementing systems to strengthen our global service offerings is a big priority. I moved my last company, JAS Forwarding Worldwide, from a legacy system written in RPG to a modern, cloud-based enterprise resource planning (ERP) system that operates in real time around the world. I'm doing something similar at Pilot.

IL: What have been your top priority projects at Pilot to date?

One is to implement the same CargoWise One ERP platform that we put in place at JAS. The legacy system at Pilot wasn't designed for the international world, with currency conversion, tax reporting, and other functions you need on a global system.

We are also examining the large collection of applications Pilot has been using to conduct business. It's like a quilt: It has been patched together. But the architectural piece was missing. As Pilot started scaling up to do billions of dollars of business, it was hitting a ceiling with its technology. We have had to figure out how to break through that ceiling and take the business forward.

IL: Tell us about an early experience that helped shape you as a leader.

In the 1990s, I worked in the IT department of the Boys & Girls Clubs of America. One day I mentioned to the CEO at the time, Tom Garth, how cool it would be if we could put technology into the hands of the 2.5 million kids the Boys & Girls Clubs were serving back then. This was in the days when we heard a lot about the digital divide, the gap between people who had access to technology and those who didn't.

Tom thought it was a great idea, so we put together a program called Club Tech, with help from Digital Equipment, Microsoft, the U.S. Department of Justice, and private funders. The program still exists in the clubs today.

That initiative defined me as a leader. I discovered that I am a visionary, the type of person who is always thinking 24 to 36 months down the road, asking, "What are the possibilities?"

IL: Besides being a visionary, what other qualities make you an effective leader?

I think God put us on earth not to be mediocre. Why not be the best you can be? To do that, you need to cast a vision of where you're trying to go. This is one of the most important steps when I take over at a new company: Define what you want the IT organization to look like, in a way that lines up with the company's mission and vision.

I keep up with the latest developments in technology so I can help our engineers understand how IT enables the company's strategy, expansion, and market share. I have to think about what's important to our board, but translate those concerns to the teams I'm leading so they understand the work plans. In other words, I'm a bridge builder.

But I am also constantly creating pathways for people to work their way up into new roles. Also, my Christian faith is incredibly important to me. It keeps me grounded both in my personal life and my profession.

IL: Who is a business leader you admire?

I've been a fan of Walt Disney for years. There's a picture in my office, which I've carried around through several jobs, that shows Walt standing in front of Cinderella's Castle in the 1950s, with tractors driving around, clearing the land. It displays the word "Vision," and there's a quote: "It's kind of fun to do the impossible." I'm fascinated by how he was able to turn vision into reality. I'd love to sit down with Walt and find out what he'd be dreaming about today.

IL: What has been one of your best days since you joined Pilot?

It was my first day of work. We're based near Philadelphia, and the Eagles had just won the Super Bowl the night before. As the new guy, I did a lot of meet and greet. There were a lot of happy people around here that day. Seeing their enthusiasm was great.

IL: How do you spend your time when you're not at work?

I spend a lot of time with my family. Sometimes I golf with my sons, but not as often as I would like. I also love to do home improvement projects. I just completed a master bath renovation, doing all the work myself, including the plumbing and electric. Now I'm on the lookout for a beachfront bargain I can work on.

Back to the Future

Mark Baker's first experience with technology was running the Chiron generator—the system that produces scrolling graphics at the bottom of the screen—for his church's television ministry. After studying Basic programming in college, he applied his new know-how to his father's regional trucking company, buying an early-generation personal computer from Radio Shack and creating software for route optimization and billing.

After a while, Baker realized he didn't want to work in a family business. "And the world of logistics drove me crazy, how slow it was to evolve," he says. He took a long detour, holding IT positions with employers such as Shop 'n Chek, the Boys & Girls Clubs, and IBM. But then a recruiter connected him with ABX Logistics in 2003. "I went back into logistics reluctantly," he says. "It hadn't changed since the day I left. But I realized that the industry had the potential for a lot of modernization and digital transformation."

Being part of that change is a great deal of fun, Baker says. "I think of my father looking down at me and having a good laugh, because I swore I'd never get back into it."

Related Articles
The Shape of ‘Things’ to ComeTurn to Technology to Attract the Next Generation of WorkersHow to Find Value in Big DataWinter Reading Guide 2017Joanne Wright: Turning Data Into InsightFour Technologies Set to Change the Future of LogisticsSupply Chain Analytics: Creating Value from Data with Machine LearningGOOD QUESTION | What disruptive innovation will have the greatest impact on the supply chain?Leading by Example and EmpowermentTips for First-time TMS Buyers More related articles...