Wes Kemp: Portrait of a Leader 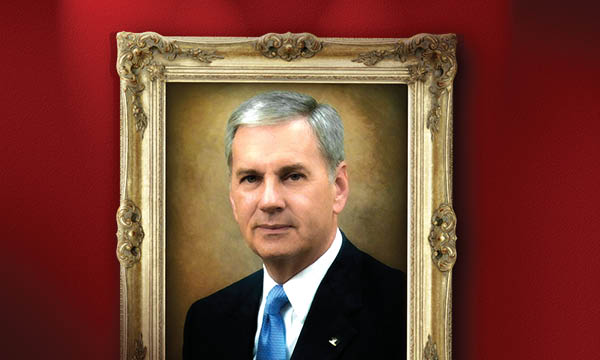 Wes Kemp recently retired after a 42-year career with LTL carrier ABF, where he rose from management trainee to lead the company as president and CEO. In this exclusive interview, Kemp shares his insights on the transportation industry, trucking regulation, technology, and his new role teaching the next generation of logistics leaders.

The transportation bug bit Wes Kemp early. As a college student at the University of Arkansas, Kemp enjoyed his transportation courses so much that he earned enough credits to graduate with a degree in either transportation or management. He opted to pursue a management degree because it was broader in scope. Yet he would ultimately dedicate the next 42 years to the transportation field—and to one company.

As a young college graduate, Kemp didn't see himself living "north of the Missouri line." Despite offers of positions in other parts of the country, he continued his job search—a decision that ultimately led to being hired by ABF Freight System Inc., a less-than-truckload carrier based in Fort Smith, Ark.

But the job with ABF did indeed take him north of the Missouri line. In 1981, Kemp moved to Connecticut to manage the company's New England operations. In his role as regional vice president of operations, he learned the importance of building business. "The region's vice president of sales brought in a lot of business," Kemp notes. "He made me look good on the operations side."

ABF was founded in 1923 and operated as Arkansas Best Freight System from the 1950s until 1980, when the company abbreviated its name to ABF. Over the years, some economic and regulatory ups and downs, and a series of acquisitions, nearly consumed the carrier.

The acquisitions were important not only to ABF, but to the trucking industry as a whole. In the regulated era, which began in 1935 when Congress gave the Interstate Commerce Commission authority over the trucking industry, acquisitions were key for carriers seeking to expand their networks and become national players. Kemp considers trucking deregulation in 1980 a competitive high point because "it was a pivotal change that allowed ABF to open terminals where we wanted to," he says.

Not everyone in the industry, however, supported deregulation. "If deregulation goes through, we'll all be in trouble," Kemp recalls one senior executive saying when the switch was being discussed in the 1970s.

Some carriers favored regulation because all they had to do was control their costs. The barriers to entry essentially created protected markets for carriers once they obtained operating authority in a region. Pricing wasn't an issue because carriers could rely on the government to bump up rates three percent to four percent every year.

While a large segment of the trucking industry did not withstand deregulation, ABF embraced the changes it brought, and outlined a plan for the company's survival.

"Deregulation worked out pretty well for ABF," admits Kemp. "We're one of the few survivors of the regulated era." In fact, Kemp refers to a pair of slides he uses in many presentations. The first slide lists the leading LTL carriers prior to deregulation. He then clicks forward to the next slide, displaying the one company that still operates under the same name: ABF.

Kemp believes ABF's best days are still ahead. The current economy has been a rough ride, he acknowledges, "but when supply and demand are finally rationalized in the less-than-truckload sector, this will be a very lucrative business for the survivors." He counts on ABF being one of those survivors—and history is on his side.

"Trucking offers a good example of the power of free-market capitalism," explains Kemp. He has seen the industry protected but constrained under regulation, as well as the advantages and abuses under economic deregulation.

"The road to success is largely about having options," says Kemp, offering up one of the core arguments for free markets. "Shippers have more options for moving freight today than they did prior to industry deregulation in 1980."

Carriers today do more and do it better than ever before, Kemp maintains. He cites one reality of the regulated era that would not be apparent to today's transportation students—or even many transportation professionals. "Moving an LTL shipment from coast to coast used to require the use of two or three different carriers and one or two weeks in transit," he recalls. "Now a single carrier accomplishes the move in three to five days."

Price and service are not the only benefits of deregulation, continues Kemp. The structure of the industry has become more resilient, and better able to keep commerce moving despite major disruptive events.

Choice and options are at the heart of Kemp's discussion of free markets, but that seems only natural. His career was built on the choices he made when he was presented with some unusual opportunities.

As ABF expanded, Kemp moved into developing key information technology tools and engineering principles, while also working on the front lines in terminal operations. He and his colleagues always kept the future of trucking and the LTL market in mind.

"In the 1970s, we were envisioning projects that have come to fruition only during the past decade," says Kemp. "For instance, we realized the value of receiving freight pickup data when drivers made stops, but the technology was not yet mature enough to deliver that information efficiently. Wireless communication changed that."

While other motor carriers focused on buying trucks and competing to build the largest terminal network, ABF supplemented its growth with IT innovation. Kemp, who had risen through the ranks of ABF's line-haul transportation department, took on the role of liaison to ABF's information technology department in the early to mid-1970s.

Kemp worked on the technology's external design, creating flowcharts of the basic logic each system needed, and sharing these insights with systems analysts and programmers.

Kemp then learned the business from an engineering perspective, focusing on maximizing efficiencies. "I worked with the consultants for a few years, then we brought the work in-house," says Kemp, who was appointed director of engineering. "I've been very fortunate in my career to be in the right place at the right time."

ABF deployed what it called its teleprocessing system in 1969. "We were one of the first—if not the first—trucking company to launch an online tool," he says.

The first application to go online was freight billing. ABF entered information about picked-up shipments into a database, from which it created manifests to control routing. "We started manually processing tariffs in a more centralized location rather than processing them at every terminal," Kemp says. All freight bills came to a central rating staff in the Fort Smith headquarters.

As technology caught up, ABF was able to accomplish some of the goals it set before or during Kemp's time as liaison to the information technology group.

"When microbrowsers came out 10 years ago, ABF embraced that technology," he says. It took time and internal development effort, but ABF realized its goal of collecting real-time pickup information from the driver.

As Kemp's career progressed, he transitioned from being mentored (see sidebar) to offering his expertise to up-and-coming logistics professionals. He now accepts requests to speak to classes at the University of Arkansas.

ABF has enjoyed a long relationship with the university and its Supply Chain Management Research Center, and Kemp served as keynote speaker at one of its conferences.

"The university had been asking me to teach for years," says Kemp. He didn't feel he could balance teaching and his responsibilities at ABF, so it wasn't until he reached the mandatory retirement age for ABF officers that he accepted. He is currently developing the curriculum for his first class, "Capitalism and the Global Supply Chain."

Throughout his long transportation career, Kemp maintained a broad perspective as he found opportunities to work at the center of new challenges facing the industry. Would he do anything differently? "I'd become a student of the market earlier," he says. "In operations, you often focus on moving goods as quickly and efficiently as possible, and may not worry about how they got there." Kemp managed to reach a balance in his understanding of the business and the market.

His next challenge is helping prospective logistics and supply chain professionals understand how their field fits into the global economy. "Supply chain and logistics students aren't learning enough about the importance of the free-enterprise system," he observes. "My class addresses that learning gap. I have a passion for it."

He also has a passion for transportation, which he says is vital to the country. "Without delivery, there's a breach of contract," Kemp notes. "That's what transportation professionals do: fulfill contracts between two consenting parties. I consider our work important to the commerce of the country."

The Art of Mentoring

Wes Kemp's 42-year career at ABF reflects some formal education and a lot of informal learning, including mentoring relationships.

Like many companies in the early 1970s, ABF operated a management training program. When Kemp joined the company, mentoring was less formal, and Kemp believes that is the more natural and effective approach. "Some companies assign mentors, but I think there has to be chemistry between people for mentoring to work well," he says. "It happens naturally when you have people who want to see others do well.

"I had several mentors during my career," Kemp notes. "They were people I could go to for guidance; who could teach me the business, and how to approach it from a philosophical standpoint."

Mentoring by assignment can detract from its effectiveness, Kemp believes. "The company's culture has to be right to set the stage for effective mentoring," he adds.