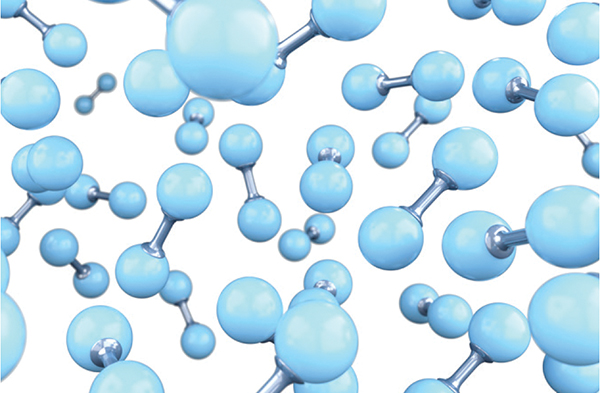 A coalition of major European electricity groups has urged the European Commission to prioritize renewable hydrogen in its COVID-19 pandemic recovery plan. Hydrogen powered by 100% renewable electricity has zero greenhouse gas emissions and should be Europe’s top priority when supporting a clean hydrogen supply chain, the coalition says.

Wind and solar power are now the least expensive electricity sources, and are expected to play a major role in decarbonizing the economy; however, some industries such as steel, chemical, and heavy-duty transport are too expensive or difficult to electrify. Renewable hydrogen will play a key role in these sectors, according to the coalition.

However, almost all hydrogen comes from fossil fuels—76% comes from natural gas and 23% from coal, according to the International Energy Agency. The remaining 1% comes from renewable electricity.

Scaling up hydrogen with renewable electricity “would require an ocean of subsidies, and would likely fail to deliver the volumes needed to make a real difference,” says François-Régis Mouton of the International Association of Oil and Gas Producers.

Renewable electricity will be the only source resistant to the COVID-19 pandemic, according to the International Energy Agency (IEA). The steady rise of renewable energy, combined with the drop in demand for fossil fuels, means clean electricity will play its largest-ever role in the global energy system in 2020, and help erase a decade’s growth of global carbon emissions.

Demand drops: Global energy demand is likely to drop by 6% in 2020, the equivalent of losing the energy demand of India. The pandemic’s impact on energy use will be greater in advanced economies—demand is expected to fall by 9% in the United States and by 11% in the European Union.

Emissions fall: The collapse of fossil fuel demand may cause global emissions to fall by 8% in 2020 compared to 2019, a drop six times larger than the record fall after the 2009 financial crisis.

Renewables rise: Renewable energy is expected to grow by 5% in 2020, to make up almost 30% of the world’s decreasing demand for electricity. The growth of renewables may prompt fossil fuel companies to generate more clean energy and urge governments to include clean energy in economic stimulus packages.

Oil, gas, and coal drop: Global efforts to curb the spread of COVID-19 led to severe restrictions on travel and the global economy that will cause the biggest drop in global oil demand in 25 years. Demand for gas is expected to fall by 5% after a decade of growth. Coal demand is predicted to fall by 8%, its largest decline since the end of World War II. 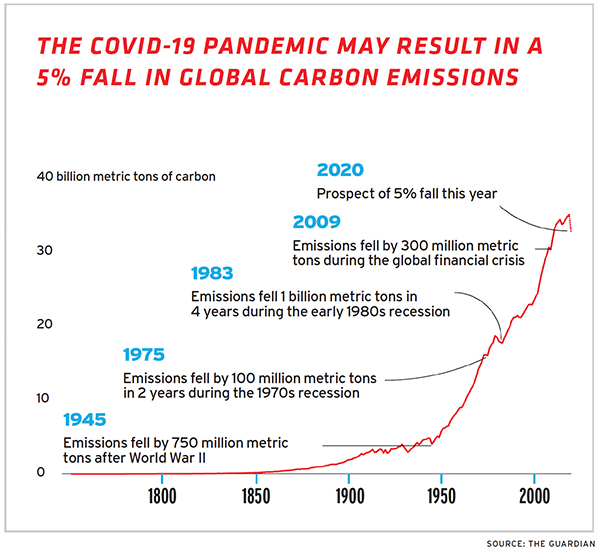 The COVID-19 lockdown has led to a significant drop in energy consumption across gas, oil, and electricity. Business leaders, experts, and policymakers are still assessing virus’s impacts on the energy landscape, according to the United Nations Economic and Social Commission for Asia and the Pacific (ESCAP).

One medium-term impact of COVID-19 may include decreased investment in energy access, as national budgets refocus on other priorities. This would severely impact the capacity of rural health centers to support front-line health workers and provide essential services to COVID-19 patients.

The anticipated coronavirus vaccine will need cold storage and refrigerated transport over large areas for large-scale immunization in developing countries. Technologies such as solar will play an indispensable role in this effort, the organization says.

U.S. Reaches No. 1 for Renewables 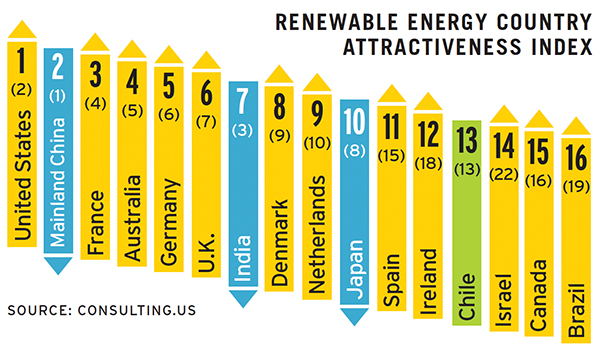 The United States now ranks No. 1 in the renewable energy market (see chart) because of a short-term extension to the Production Tax Credit, projected long-term growth in offshore wind, and plans to invest $57 billion and install up to 30 gigawatts by 2030, according to Consulting.us.

China dropped to No. 2 due to reduced demand resulting from COVID-19, as well as government policies. France jumped from fourth to third place, with awards of 1.4 gigawatts for wind and solar developers as the country shifts away from nuclear power.

Despite the pandemic affecting renewables projects in the short term, declining costs and technological advancements will continue to drive growth in the sector in the long term, Consulting.us says.

The global rise in electricity generation via renewable sources has increased the demand for advanced batteries that can strengthen this intermittent supply. This is especially important in areas with unreliable or nonexistent grid connections, according to Zinc8 Energy Solutions.

One challenge to growing a North American energy storage industry has been a dependency on hardware components, metals, and chemicals, many of which come from outside North America. Price volatility and security of supply also impact metals such as lithium and vanadium, used in some batteries.

Zinc-air batteries may offer a viable solution. Zinc is abundant and inexpensive in North America, and its chemistry is robust and safe. A zinc-air battery has decoupled energy and power, making it a low-cost, long-duration battery storage solution that could help support renewables.

The global renewable energy market size is projected to grow from $184.3 billion in 2020 to $226.1 billion by 2021, with the solar segment dominating the industry, according to a Research and Markets forecast report.