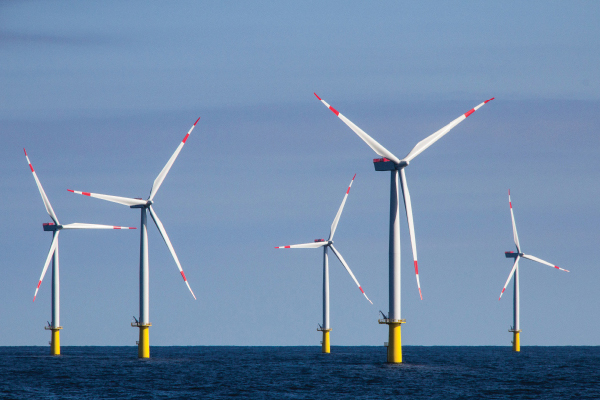 President Biden recently approved the Vineyard Wind project—the first major U.S. offshore wind farm—off the coast of Massachusetts. The project, which would generate up to 800 megawatts of electricity from 62 giant wind turbines, is expected to produce enough electricity to power 400,000 businesses and homes in New England by 2023, while reducing carbon emissions by more than 1.6 million tons per year.

Boston-based General Electric will manufacture the massive Vineyard Wind turbines, which will send electricity along underwater cables to the regional power grid near Hyannis. Even though GE will manufacture the major components in Europe, as many as 2,000 workers will be employed locally during the project's construction and dozens more will work in maintenance and operations after the wind farm is complete.

Representatives of the fishing industry continue to criticize the Vineyard Wind project, claiming that the giant wind turbines will disrupt their fishing grounds and create navigational hazards to their boats, even though the plan calls for spacing them one mile apart.

The decision to approve the Vineyard Wind project is an important milestone in the Biden administration's effort to battle climate change by moving the nation's energy policy away from fossil fuels and toward cleaner, renewable sources.

The administration plans to install 30 gigawatts of offshore wind power capacity—the equivalent of more than 36 additional wind farms of Vineyard Wind's size—in U.S. waters by 2030. More than 2,000 turbines will be needed to meet that target.

Prompted by the global chip shortage, President Biden signed an executive order for a 100-day review of supply chains for critical materials, including for semiconductors, large-capacity batteries, and rare-earth elements. The United States—which is 100% reliant on imported rare-earth elements—and its Western allies are behind, while China built its rare-earth supply chain decades ago, says a U.S. News report.

China controls about 80% of the world's rare-earth production capacity, 43% of exports, and nearly 90% of refining, which means the world sells China low-value ore concentrate and China sells high-value end products. The United States must make the supply of critical minerals a key part of its domestic and foreign policy to get in the game, the report says.

Although there is strong opposition to these environmentally challenging mining practices, it is possible that U.S. companies can mine and process critical materials with much lower environmental impacts than China can, the report says.

Oil Spouts to a Two-Year High

Ammonia is used for fertilizer and industrial materials, but could it also be an effective future energy source? JERA, Japan's largest power generator, thinks so. The company is working with manufacturers, shipping companies, and domestic electric utilities to build out a global supply chain for ammonia as a fuel.

Ammonia does not emit carbon dioxide when burned, but production creates emissions if it is made with fossil fuel.

JERA, a joint venture between Tokyo Electric Power and Chubu Electric Power, aims to achieve net zero emissions of carbon dioxide by 2050 as well as 20% use of ammonia at its coal-fired power plants by 2035. It signed a memorandum of understanding with Norwegian ammonia maker Yara for the delivery of emissions-free ammonia as fuel for electricity generation in Japan, following an agreement with Malaysia-based Petronas to collaborate on ammonia and other energy projects.

JERA is also planning a demonstration project to develop technology to co-fire ammonia and coal at a 1-gigawatt commercial coal-fired power plant. In an effort to expand its renewable power assets to 5 gigawatts by 2025, JERA and its partners Equinor and Electric Power Development submitted a bid for three offshore wind power projects in Northern Japan.

JERA also began an environment assessment process for two offshore projects, one off Ishikari Bay in Hokkaido and another in Northern Japan.

Royal Dutch Shell plans to cut down its refinery footprint and transform the facilities into energy and chemical parks that generate low-carbon fuels.

Both deals are pending regulatory clearance, with completion expected in Q4 of 2021.