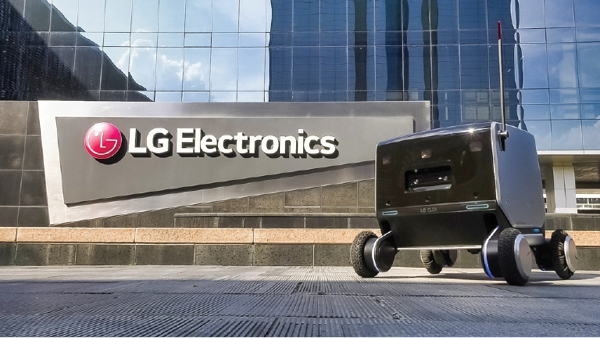 South Korean technology company LG Electronics unveiled a new delivery robot that can serve both indoor and outdoor environments, which could be a game-changer for contactless delivery and services. The four-wheeled robot can adjust the gap between its wheels to self-adapt quickly to uneven terrain for a smoother ride.

Food delivery services could be on the menu for these new robots. Last winter, LG debuted its BaristaBot to serve coffee to workers at its headquarters in Seoul, and began using its CLOi robots to make deliveries from convenience stores to people inside its LG Science Park. In July 2020, LG partnered with Woowa Brothers and the Korea Institute for Robot Industry Advancement to develop robot waiters.

The robot was developed in conjunction with MIT Associate professor Sangbae Kim at LG Boston Robotics Lab. The company plans to test run the robot at the end of 2021. LG has already commercialized indoor delivery robots and tested outdoor delivery robots.

Big tech is the biggest economic winner during the pandemic, as global lockdowns push retailers, supply chains, and consumers to use their e-commerce and fulfillment services. As the digital wave continues, Amazon, Google, Apple, and Microsoft report record-breaking profits:

Sony predicts that robots will completely take over manufacturing for its cameras, TVs, and smartphones as the entertainment company tightens its focus on consumer electronics, providing services that keep consumers coming back.

Automated production lines could cut costs by 70% at Sony's main TV factory in Malaysia by fiscal year 2023 compared to 2018, the company says. Sony also aims to use a combination of factory workers and robotics in its smartphone and camera manufacturing.

Sony has stabilized its TV losses in the past decade, shifting to smaller-volume, higher-end products. While the company continues selling to consumers, a meaningful part of its growth will also come from professional products, such as crystal LED displays for virtual video production and ball-tracking technology for the sports entertainment industry, Maki says.

An estimated 22 million hard disk drives age out of North American data centers each year. Data centers are the world's largest consumers of those drives, which are one of the largest end-products for rare earth magnets. The United States generates nearly 17% of all used hard disk drives—the largest share globally, the report says.

If all these devices were recycled, they could supply more than 5% of all rare earth magnet demand outside of China, researchers estimate. Some researchers, tech companies, manufacturers, and recyclers have explored giving those materials a second life.

In 2019, Google, hard disk drive manufacturer Seagate, and electronics refurbisher Recontext collaborated to remove 6,100 magnets from Seagate hard drives in a Google data center and insert them into new hard drives. The results show that rare earth magnets can be reused on a large scale, and their carbon footprint was 86% lower than new ones.

Dell also launched a pilot program with Seagate and Recontext to harvest magnets from computer hard drives with its take-back program, yielding 19,000 pounds of rare earth magnets for reuse.

While it may be a long time before the magnets are recycled on a large scale, the Biden administration may prioritize these efforts. Such programs could also help the electric vehicle sector develop its own rare earth magnet recycling process, the report says.

Even with uncertainty surrounding the back-to-school experience, consumers will spend $37.1 billion on back-to-school shopping in 2021, the National Retail Federation predicts, a 9.4% uptick from last year. And 2021 is seeing an even greater demand for technology purchases, with parents wanting their kids to keep up. Back-to-school tech trends include:

Getting gadgets: Spending on tech gadgets is expected to grow 48% from last year and reach parity with computers and hardware, says a Deloitte report. Computer spending will be up 28% this year. Parents will splurge on gadgets for their kids, such as cell phones, tablets, wearables, and e-learning programs.

Tech over retail: Getting the latest wearables and gadgets is more important than having the most fashionable outfits this year, with spending on clothing and accessories flat over 2020. Many gadgets also reduce the necessity for traditional supplies, such as pens and notebooks, which will advance only slightly this year.

Tech-enabled shopping: Parents plan to curb in-store spending and increase their online spending, which is up from 37% in 2020 to 39% in 2021. More back-to-school consumers plan on using tech-enabled shopping tools this year, such as voice assistants, digital wallets, and buy buttons on social media. Many parents with children in school are now leading-edge millennials and trailing-edge GenXers, making adoption of these advanced capabilities easier.

Getting social: More parents will turn to social media to help with shopping, rising from 25% last year to more than 40% in 2021. They aren't just interested in product offers; 42% visit retailers' social media pages to determine if they are worthy of their business. This calls on retailers to make their branding clear across all channels.