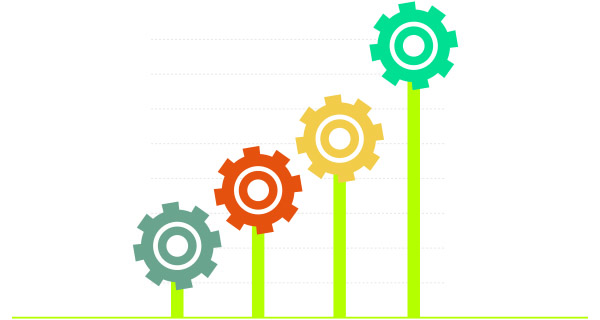 The news for the general economy may be mixed, but for manufacturers it's all systems growth. ThomasNet's annual Industry Market Barometer® (IMB) survey of buyers and sellers of products and services in North America's industrial/commercial marketplace shows an upward trajectory for this sector, year after year, as they continue to lead the economy forward. These companies are growing, hiring, and investing for more growth to come. More than half (58 percent) grew in 2013, and 63 percent expected to grow by the end of 2014.

Positive indicators are everywhere. Manufacturers are getting more business from existing markets, and average account values are rising. Nearly eight out of 10 (76 percent) are now selling overseas, and 33 percent expect this to rise, too. In anticipation of what's ahead, they're increasing production capacity, optimizing manufacturing operations, and upgrading facilities. Hiring and retraining staff are top priorities to help them scale. More than half (52 percent) of these manufacturers expect to add staff over the next several months, up from the 42 percent who planned to hire in 2013.

A deeper look at the 2013 survey results raises concerns about whether manufacturing is sufficiently prepared to handle continued growth. One key fundamental is missing—a robust pipeline of skilled workers. Having the people to operate the machines, work the lines, and create new products is mission-critical. Yes, manufacturers are hiring and developing their people, but to keep up with the opportunities at hand, they will need to recruit faster, smarter, and harder.

The 2013 IMB survey called attention to a "ticking biological clock"—the disruption that is coming as baby boomers leave the workforce in accelerating numbers, without people primed to replace them. In 2014, 38 percent of manufacturers report that they'll leave their jobs in one to 10 years (see Figure 1), and most lack a plan to fill their shoes. And, with more than 200,000 jobs still unfilled, manufacturers can't afford to wait for new talent to walk in the door. They tell us they need skilled, experienced people—line workers, trade workers, engineers, and production managers—and they're nowhere to be found.

Yet, one solution is in plain sight—formulating plans to attract the generation of millennials (ages 18-32) who will comprise about 75 percent of the workforce by 2025. For an industry that values specialized training and experience, this generation represents a goldmine of opportunity as most millennials are technology savvy. Manufacturing is increasingly headed toward digitization, and heavily reliant on this skillset. Whether changing careers or just entering the workforce, millennials can take the time to learn the business before their predecessors retire. Yet, most manufacturers (62 percent) say millennials represent a small fraction of their workforce, and eight out of 10 have no explicit plans to increase these numbers.

The 2014 data shows that the manufacturing industry increasingly aligns with millennials' value systems and technology expertise. The research demonstrates that millennials have an opportunity to make a social impact working with sustainable and green technologies, solar energy, and wind power. In addition, respondents cite innovations in design and manufacturing software, automation/robotics, and 3D printing as intrinsic to today's jobs.

More than eight out of 10 (81 percent) IMB respondents are baby boomer age or older. On the one hand, these manufacturers don't see their industry as a place for millennials. A larger issue is at play—younger people still perceive manufacturing as "blue collar" work, according to 46 percent of respondents. And baby boomers' perceptions of millennials exacerbate the challenge. Forty-three percent of respondents say they believe that this generation lacks the work ethic and discipline to succeed.

One bright spot that can help bridge intergenerational barriers is apprenticeship programs. In 2013, IMB respondents were advocating for such programs, and in 2014, a small number are using them to teach skilled trades such as machining, production, assembly, CNC milling and turning, and welding. Manufacturers see these programs as a way to fill skill gaps and get new talent into place. But until misunderstandings on both sides are erased, the manufacturing community won't be able to fully participate.

In short, the manufacturing sector is at a crossroads. To take its rightful place as a growth leader, this sector must embrace the future workforce who will get them there. The path has been laid for them to succeed, and the question is whether they'll act in time. The glory days for American manufacturing could be back again, for years to come. Closing the gaps between baby boomers and millennials is critical to making this happen.

For the third consecutive year, business is trending up for manufacturers, according to IMB survey results. Of the nearly 500 North American manufacturers that responded, more than half (58 percent) reported business growth in 2013, and nearly two-thirds (63 percent) expect increases in 2014 (see Figure 2).

Manufacturers continue to invest and do business overseas, too. This has grown year over year, with 76 percent of respondents citing some form of overseas business as part of their growth strategy (see Figure 3). In 2015, one- third (33 percent) expect overseas business to increase.

How Manufacturing is Evolving

Manufacturers cite five key areas as having a significant impact on their companies in the next two years (see Figure 4): sustainable and green technologies, advanced materials, design and manufacturing software, automation and robotics, and recycling and remanufacturing.

While lower on the list, respondents also mention additive manufacturing/3D printing, and energy-related technologies such as solar and wind. In past IMB surveys, sustainable and green initiatives fell to the bottom of the priority list. Anecdotally, "being green" is now perceived as advantageous to manufacturers due to a rise in customer expectations, as well as the availability of more affordable implementation. As a reaction to this new reality, more manufacturers and their suppliers are incorporating green initiatives into their operations.

Ninety-seven percent of manufacturers report that they will be directing resources in 2015 toward competing more aggressively in their core markets, and improving customer retention and service (96 percent). Additional strategies include both increasing (91 percent) and developing existing staff (94 percent).

In response to positive growth forecasts, hiring is on the upswing, with 52 percent of manufacturers expecting to increase headcount by June 2015. This is 10 percent more than last year (42 percent). Companies say the key areas needing staff are line workers (60 percent); manufacturing/production management (54 percent); skilled trade workers (53 percent); and engineering (50 percent). Also, when asked what they believe an ideal candidate in these same areas should possess, tenure and specialization outweigh advanced degrees (see Figure 5).

In 2013, manufacturers said hiring was one of their biggest challenges. Anecdotally, this continues to be a critical concern. 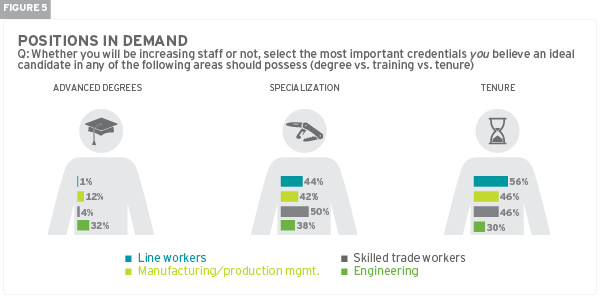 Manufacturing is dominated by a baby boomer audience, with 80 percent of IMB respondents between the ages of 45 and 65+. Nearly half (49 percent) are 55 and older.

When asked when they plan to retire, 38 percent say within the next 10 years. Unfortunately, nearly seven out of 10 respondents (65 percent) say there is no succession plan in place to fill their position.

The 2013 IMB survey reported on the untapped workforce of millennials (ages 18-32), which is expected to comprise about 75 percent of the national workforce by 2025. Six out of 10 (62 percent) manufacturers employ a small number of millennials (25 percent or fewer).

Moreover, an alarming number of companies (56 percent) say that they expect this number to stay the same in 2015. In addition, slightly more than eight out of 10 manufacturers (81 percent) have no explicit plans to increase the number of millennials that they employ.

With so many manufacturers planning to hire in 2015, and the fact that many baby boomers are retiring, it's surprising that more manufacturers don't have a plan to bring on more millennials to fill the pipeline.

An overwhelming number of respondents perceive apprenticeships as a viable opportunity for manufacturers to bridge the skills gap, and believe that these types of programs can contribute to their success. For the most part, manufacturers agree that these programs are a smart way to ensure that institutional intelligence and skills get transferred to the next generation.

These programs often offer mutual benefits for apprentices and manufacturers alike. Companies can tap into millennials' technology skills while offering this generation an opportunity to learn their business.

A large number of respondents, however, feel that apprenticeships face an inherent issue—that millennials lack the discipline and work ethic to succeed. Further, many feel that there is a larger issue at work: a lingering "blue collar" perception of manufacturing. Strong anecdotal evidence supports this sentiment, and raises concerns about manufacturers' overall ability to grow in light of these staffing challenges.

Where Do We Go From Here?

They continue to expand aggressively in core markets, and are investing in capital equipment, production capacity, optimizing manufacturing operations, and upgrading facilities. Moreover, manufacturers continue to invest resources in tactics that will secure new business with an eye toward domestic reshoring as an important growth opportunity.

Yet, some issues could derail this high-speed train. The desire and ability to attract the next generation of workers will be the wild card that will either point manufacturers to further growth or will become their Achilles heel. The IMB survey reveals that this issue is reaching a mission-critical level with an aging workforce and nearly 70 percent without a succession plan.

Respondents believe that millennials perceive manufacturing as a "blue collar" industry. In addition, respondents report that millennials may lack a solid work ethic. This adds up to a serious concern that manufacturers may not be able or willing to hire and retain the number of millennials necessary to sustain their growth.

Being aware of these issues, however, is the first step toward solving them. North American manufacturing has always been able to adapt to changing market conditions. In fact, the IMB survey reports that many companies are moving forward with apprenticeship programs that will lead the way for the next generation of skilled trade workers and further galvanize growth.

As manufacturing continues to prosper, we must not rest on our laurels. Instead, we must re-double our energies to break new ground toward achieving continued success.

A total of 490 manufacturers and custom manufacturers from North America, primarily the United States, responded to the Industry Market Barometer (IMB) survey. The overwhelming majority represents small and mid-size businesses, mirroring the manufacturing marketplace, most notably:

The respondents who provided data are primarily owners, executives, and general managers. As buyers and sellers of industrial products and services, 67 percent are from manufacturing—durable or non-durable—and 33 percent are from custom manufacturing services companies. The 38-question IMB survey was conducted during a six-week period from Aug. 4, 2014, through Sept. 8, 2014.