U.S. Infrastructure Still at the Bottom of the Class

Every four years, the American Society of Civil Engineers (ASCE) issues an Infrastructure Report Card that thoroughly analyzes and grades U.S. infrastructure in the form of a school report card. In 2013, the United States was at risk of failing its infrastructure class, squeaking by with a grade of D+.

In 2017, after four years to hit the books and earn some extra credit, the ASCE has reevaluated America's grade. Anyone involved in transportation or supply chain won't be surprised that the D+ held firm, considering the United States has scored a D or D+ every year since the report's inception in 1998. If the United States was in high school, its graduation would be in question.

Continued lack of investment only makes the problem worse with each evaluation. The dollar amount required to get ahead of our crumbling infrastructure, and bring the average to a B, rises with each report, this time climbing from $3.6 trillion in 2013 to $4.6 trillion. This leaves a gap of about $2 trillion between planned public-private funding and required investment over the next 10 years.

The ASCE predicts dire consequences for failing to close that gap. In its related study, Failure to Act: Closing the Infrastructure Investment Gap for America's Economic Future, it cites the largest issues: $3.9 trillion in losses to the U.S. gross domestic product by 2025, $7 trillion in lost business sales, and 2.5 million lost jobs by 2025.

Not all infrastructure is flunking, however. Rail infrastructure received a respectable B, up from C+ in 2013. Bridges held steady at C+, though roads and highways still sit firm with a D grade. Inland waterways narrowly escaped failure, moving up from D- to D, and ports also advanced, going from C to C+. Meanwhile, airports and aviation infrastructure maintained a D.

Despite a lack of funding and constant government borrowing from trust funds that are supposed to be dedicated to infrastructure, some areas have shown progress. Now it's up to the new administration and private investors to not only find ways to provide additional funding, but to look at the sectors of the nation's infrastructure that are making advancements and find ways to apply those successes across all aspects of our nation's transportation infrastructure before it's too late. 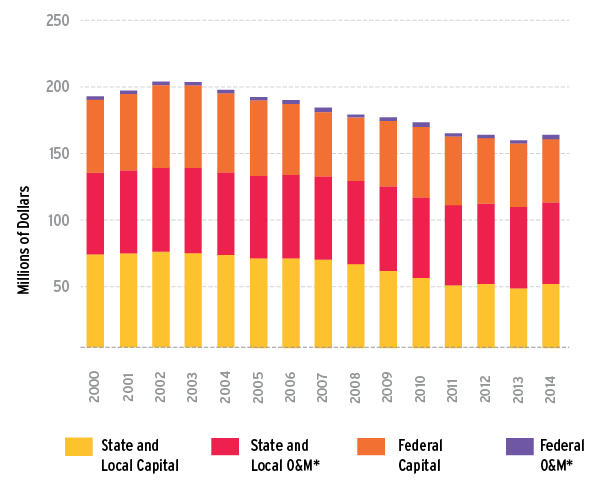