U.S. Infrastructure: Will It Finally Be Fixed? 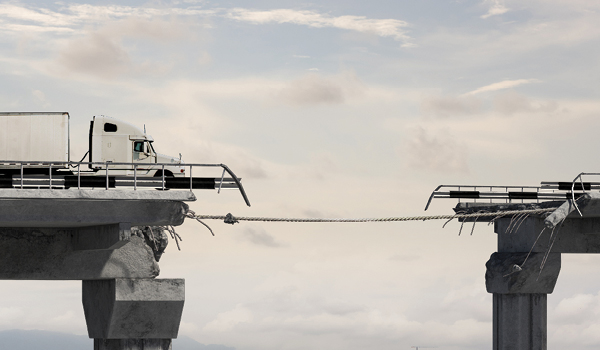 A recently leaked Trump administration draft of the Comprehensive Infrastructure Plan provides funds to states for roads, ports, bridges, and more. But will it become a reality?

In June 2011, after spending billions on shovel-ready projects to repair infrastructure, President Obama joked to his Council on Jobs and Competitiveness: "Shovel-ready was not as shovel-ready as we expected." Funny (not funny) to the millions of businesses, workers, and consumers depending on good transportation infrastructure to be the backbone of the economy.

It's no secret that our nation's transportation infrastructure is crumbling, and has been for some time. Tens of thousands of bridges across the United States are structurally deficient. Airports, highways, and ports are experiencing record congestion that delays the movement of freight throughout the supply chain and hurts our nation's ability to conduct commerce.

The Obama administration tried to address the problem with the Fixing America's Surface Transportation Act in 2015, but the measure has fallen far short in terms of meeting infrastructure project demand. Now, the Trump administration's promise of $1 trillion to repair the nation's crumbling infrastructure hasn't come to fruition yet. Even when this much-needed investment does come along, experts express concern that it will simply be a one-off measure. That also won't be enough.

The average annual investment gap through 2025 is $91 billion to $110 billion, according to Failure to Act: Closing the Infrastructure Gap for America's Economic Future, a report issued by the American Society of Civil Engineers (ASCE) using data from the organization's 2017 Infrastructure Report Card study, which rated overall U.S. infrastructure with a near-failing grade of D+. Current investment levels meet only about half the financial obligation necessary to make significant improvements moving into the future, ASCE estimates.

"Our infrastructure has been on the decline for decades because of a lack of investment," says Kristina Swallow, president of the ASCE. "In the 1950s and 1960s we built our infrastructure, but instead of maintaining it, we neglected it. Just like your car, infrastructure needs routine maintenance and that's something our country seems to forget. We took our top-notch infrastructure for granted, and now we are paying the price as inadequate infrastructure is a drag on the economy."

We Can't Take Much More of This

There were improvements in some areas over ASCE's 2013 report, but the advances are largely negligible when considering the larger picture. U.S. transportation infrastructure stakeholders agree almost unilaterally that waiting any longer to address the issue makes solutions more difficult—and more expensive.

"These failures are already being felt, and the longer the wait, the more it will cost us in lost economic productivity and greater expense to modernize the infrastructure," Sparrow says. "ASCE's study estimates that between now and 2025, if we don't improve our transportation network—including roads, bridges, transit, rail, airports, inland waterways, and ports—then we will lose $4 trillion in business sales, and $2.2 trillion in GDP.

"With many of our transportation categories receiving 'D' grades in our report card, it's apparent that we are just patching things together. Instead, we should be truly upgrading and modernizing the network," Swallow adds.

Without a massive investment initiative of some sort, our nation's infrastructure deficiencies will undoubtedly reach unsustainable levels in the near future. The Failure to Act report lists the following shortfalls in transportation infrastructure project investment through 2025:

"At a time when the U.S. government is focused on creating jobs, propelling the economy, and modernizing infrastructure, the role played by the nation's freight transportation system is more critical than ever," says Kurt Nagle, president and CEO of the American Association of Port Authorities (AAPA).

"Unfortunately, transportation infrastructure investment by the U.S. government has lagged," he says, "impacting the flow of goods to and from farmers, manufacturers, workers, and consumers who must have access to the global marketplace."

While there have been noticeable improvements in some areas, it seems that each one is offset by a related decline. For example, federal, state, and local highway spending has stabilized and the number of paved roadways rated as mediocre or poor has decreased by 17 percent over the past six years, according to the ASCE report.

However, the report also shows that highway congestion will rise to 8.3 billion vehicle-hours of delay by 2020, up from 6.9 billion in 2014.

Similarly, the annual investment gap for airports through 2025 is expected to decrease from $4.6 billion to $4.2 billion by 2025, says the ASCE, but flight delays at the 30 airports that handle 79 percent of all domestic and global air freight will grow at a 2.2 percent rate through 2036.

Seaports also struggle for funding and rely heavily on private investment to maintain facilities and dredge waterways and harbors.

"In a 2016 AAPA survey, port authorities and their private-sector partners said they were planning nearly $155 billion in capital improvements to their facilities through 2020, while AAPA estimated, based on existing programs, the best-case scenario for related federal transport investments would be less than $25 billion during the same time frame," Nagle says.

"Cargo activity moving through U.S. seaports accounts for more than one quarter of the nation's economy, supporting over 23 million American jobs and generating more than $321 billion a year in federal, state, and local tax revenue," he adds. "To sustain and grow this freight and the economic impacts it produces, the public and private sectors must make adequate infrastructure investments."

What Should We Do?

The solutions to the nation's infrastructure problem are a double-edged sword. Things are in a poor enough state that we require immediate action, but knee-jerk reactions may also prove largely ineffective. This conundrum is the result of Washington largely ignoring the problem for decades.

"The Infrastructure Report Card offers three overarching solutions: investment, leadership and planning, and preparation for the future," Swallow says. "Those investments need to be strategic, and well thought out. We got to this place because of decades of underinvestment, so increasing these investments and targeting that funding wisely will take some time too.

"We need leadership and involvement from all government levels and the private sector to address this problem," she says. "And as citizens, we need to recognize that infrastructure isn't free. As a nation, we need to be willing to invest more—not just to have the shiny new infrastructure, but to maintain it in a state of good repair in the decades to come."

If we hope to turn our crumbling infrastructure around, many industry analysts believe the stabilization of the Highway Trust Fund (HTF), the Harbor Maintenance Trust Fund (HMTF), and other dedicated funding sources must become a priority.

These funds get bankrolled by taxes collected directly from the sources they serve—the HTF from fuel taxes, and the HMTF from taxes on cargo moved between U.S. ports, and so on. Keeping these accounts in the green and ensuring the money gets directed toward infrastructure projects would be a big step forward.

Congress, however, has historically failed to see the long-term necessity of these initiatives, partially contributing to our existing infrastructure crisis. Measures to adjust related taxes to match infrastructure maintenance costs consistently get shot down on Capitol Hill, which means that the programs struggle to remain solvent.

Insolvency troubles for the HTF began in 1990 when half of proceeds from a gas tax raise intended for highway maintenance were diverted by Congress to address the national deficit. Harbors and waterways have hit similar Congressional roadblocks.

Congress placed limits on how much money can be spent from the HMTF each year—for example, at the start of 2017 more than $9 billion sat wrapped in shiny red tape within the HMTF—leaving a surplus for a rainy day. What Congress fails to realize is that it's monsoon season.

"Funding seaport-related infrastructure is vital to optimize the supply chain and enhance America's competitiveness," says Nagle. "Recent analysis reveals the United States has only been paying half of its infrastructure bill for some time and failing to close that gap risks rising costs, falling business productivity, plummeting GDP, lost jobs, and ultimately, reduced disposable income for every American family."

Collaboration will be key if we're to rebuild and maintain U.S. transportation infrastructure. It's important that stakeholders across modes collaborate to ensure that crucial improvements get made across the board rather than squabble over available funding.

"To be competitive in the 21st century global economy, the United States needs a national multi-modal freight network that incorporates and leverages every mode of freight transportation," Nagle says.

With that in mind, the AAPA offers the following suggestions to improve the freight-handling capacity of the country's roadways, railways, and waterways:

The longer these problems go untended, the worse they will get, and the implications for the supply chain are obvious. Without well-maintained roads, cargo trucks can't move goods efficiently between U.S. destinations. Without properly dredged ports and waterways, freight sits on docks or ships instead of moving to its destination. Poorly kept airports leave cargo planes sitting on the tarmac, reducing our ability to provide one- and two-day shipping in the age of e-commerce.

There are many ways to come at our infrastructure crisis, but one thing is for sure: Doing nothing will not solve this problem. Our government must develop a workable plan, and its failure to do so thus far is confusing. Infrastructure is a rare bird indeed—an issue that has bipartisan support in Washington D.C.

Even if our executive and legislative branches came together to throw $1 trillion at the problem tomorrow, we can no longer afford to spend it the wrong way. An infrastructure plan that addresses the current needs of our roadways, railways, waterways, and airways needs time for proper implementation. It's crucial that we start now. Time is something we no longer have.

LOSSES TO THE NATIONAL ECONOMY DUE TO INFRASTRUCTURE GAPS

(All values are in billions of constant 2015 dollars) 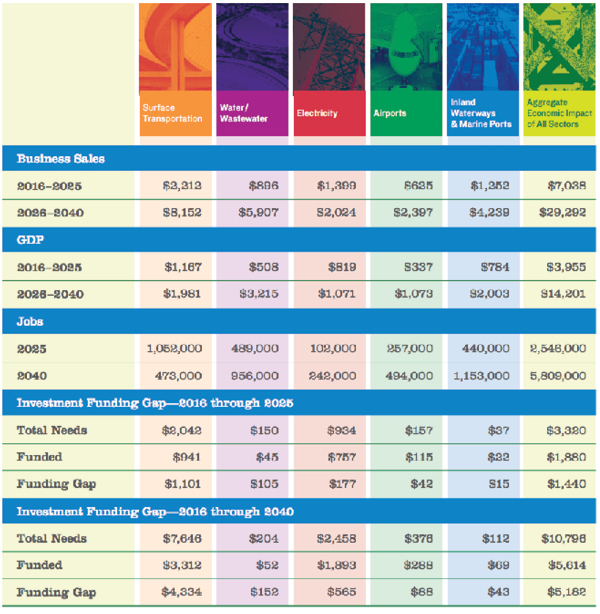 The 2016 Failure to Act analysis indicates that the overall infrastructure gap has grown relative to the initial reports. However, recent federal, state, and local investments are stabilizing the gap and moderating the potential economic losses from growing more significantly. Even with these new initiatives, surface transportation, the infrastructure category with the largest investment gap, is falling farther behind, and economic consequences continue to be significant out to 2025 and 2040.