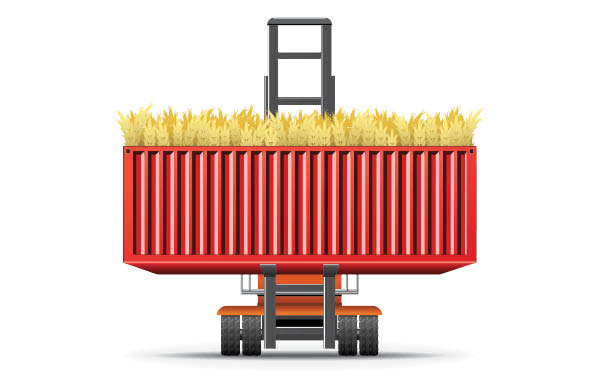 The drought that plagued much of the Midwest in summer 2012 has had a marked impact on agriculture supply and, consequently, food prices, placing an inordinate amount of pressure on supply chains to squeeze out as much extra cost as possible. While much of the news has been gloom and doom, some glimmers of progress are emerging—especially on the transportation side.

North Dakota has experienced a commodity-driven bonanza over the past few years with the oil field rush in the Bakken shale and Three Forks formations, and its established reputation as one of the top wheat-producing U.S. states. It has also become a hub for containerized rail movement thanks to an initiative spearheaded by BNSF Logistics.

The third-party logistics provider has been working with North Dakota Port Services, BNSF Railway, Ocean Carrier Partners, and agricultural and oil field shippers to put in play its "ag in a box" solution. The service does exactly what its name suggests—moving containerized agriculture for export to Asia while bringing back oil and gas commodities such as frac sand. In effect, BNSF Logistics has engineered a closed-loop supply chain solution for the region's two strongest industries.

The recent Midwest drought has done little to slow progress. In some ways, it's actually driving more business to North Dakota. "We were moving 40 containers inbound and outbound per week in 2011," says Ashley Ritteman, regional business development manager for BNSF Logistics. "Now we move up to 420 containers—a tenfold-plus increase.

"We are not anticipating any slowdown," she adds. "In fact, we predict higher demand for containerized exports out of our Minot, N.D., terminal, because North Dakota's crops haven't been as affected by the drought as those in other Midwest areas. The state expects an above-average yield for the year."

Agribusinesses and commodity traders are shifting their attention to North Dakota to fill supply contracts that would otherwise be sourced from states such as Iowa and Illinois—complementing robust investment and development in the state's oil and gas industry.

BNSF Logistics' ag in a box solution is bringing shippers in from as far afield as Montana, Minnesota, South Dakota, and the Canadian provinces of Manitoba and Saskatchewan—a 600-mile radius where the dray to BNSF Railway's Minot ramp is still competitive. Volumes coming south from Canada (40 miles north of Minot) have spiked, especially after the Canadian Wheat Board, which marketed and monopolized grain trade in the country, dissolved on Aug. 1, 2012.

Using containers to move grain exports offers significant advantages over other bulk methods. In addition to possible transloading efficiencies, companies can sell the fact that product remains intact and untouched from origin to destination. Large-volume shippers can also compare the containerized rate to what they ship via bulk, gaining economies by buying in smaller volumes.

BNSF Logistics supports the cause by pacing inbound volumes to forecasted export demand. For example, it can transload imported frac sand into boxcars and hopper cars if inbound volumes are greater than outbound movements, thereby managing container capacity so that shippers aren't stuck with demurrage charges.

While North Dakota is the only region where BNSF Logistics has identified reciprocal container demands that facilitate a shared transport solution, it is continuing to explore other circumstances where closed-loop networks can help accelerate equipment turns, improve asset utilization, and drive better economy.

Railcar data often offers clues about where the economy is trending, especially in industrial activity, energy exploration, and international trade—all of which account for a disproportionate share of economic growth—according to a recent report by Wells Fargo.

The recent downward shift in economic tradewinds is no different. Overall railcar shipments have increased 1.2 percent over the past year, continuing a recent deceleration consistent with the global economy's slowdown. Intermodal traffic is up 4.6 percent year-over-year, with container traffic up 6.4 percent and trailer traffic down 9.3 percent.

Container traffic, which accounts for 90 percent of intermodal freight, has moderated significantly since late June 2012, when it was up 10.4 percent year-over-year. The slowdown likely reflects weakening in international trade that is not yet apparent in the merchandise trade figures.

Railcar data does not yet indicate the impact of the recent U.S. drought. Grain shipments are up 2.9 percent year-to-year, and shipments of other farm products are up 6.1 percent. Shipments have been bolstered by low water levels on the Mississippi River, which diverted some barge traffic.

The most dramatic turnaround in railroad traffic has been in lumber shipments, which have gained momentum over the past year and are currently up 16.1 percent. The increase reflects gains in homebuilding. The leading states for lumber shipments are Oregon, Washington, and South Carolina.

The Federal Motor Carrier Safety Administration's (FMCSA) Compliance, Safety, Accountability (CSA) program has raised a number of concerns among trucking companies. Some carriers have openly criticized the new regulations, speculating how shippers will interpret ratings, the impact CSA scores will have on driver recruitment and turnover, and how they expose liability risk. Others, however, are embracing the mandate as a challenge to encourage positive change within their organizations.

Normal, Ill.-based Nussbaum Trucking, for example, has partnered with insurance brokerage firm HNI Risk Services to develop an internal performance program that it terms Driver Excelerator. The scorecard measures elements directly linked to the company's bottom line, including operations, safety, and fuel use.

Over the past three years, Nussbaum has been able to incorporate the program into its daily operations with marked results: more engaged drivers who understand the direct connection between their performance, the success of the company, and their own compensation; 25-percent lower driver turnover; and reduced fuel consumption due to better driving habits and purchasing decisions.

Inbound Logistics caught up with Brent Nussbaum, CEO of Nussbaum Trucking, to talk about the Driver Excelerator program.

Q: How did the collaboration with HNI Risk Services begin?

A: We have partnered with HNI for about five years. Its idea is to not just sell insurance but also counsel carriers on ways to improve operations. One of its executives, who has 25 years of experience in transportation operations, noted we were making some positive efforts to improve safety performance, but suggested that we could do more. HNI had been using an Excel-based scorecard for about 10 years, but the method was primitive. They knew we had some IT capabilities, so we started talking.

Under our existing program, company managers encouraged drivers, but were not getting as much return as desired. We decided to take a modular approach to improvements, starting with safety, then fuel, and, finally, operations. We asked our IT department to develop software that would tie Nussbaum's operating system into this scorecard. If we kept adding detail to the system, as drivers improved, we would achieve bottom-line savings we could then share with them. It has been far more successful than we ever thought it would be.

Q: Did you have FMCSA's CSA initiative in mind when you started developing this internal program?

A: CSA was on our radar. Starting with safety concerns, we asked what other daily driver responsibilities we could measure and improve. We considered everything we could tie to a score, provide feedback on, and reward. Looking at a broader set of criteria allows you to drill down and make more informed and quicker decisions about drivers who are poor performers.

Q: How does the scorecard component tie into compensation?

A: Drivers receive a monthly scorecard, rating them as an A, B, C, or D driver. Technically, we don't have any C or D drivers. Based on accumulated points (see sidebar) they are awarded gold, silver, or bronze recognition, which corresponds with a quarterly bonus. This provides drivers a clear path toward improving their performance and compensation. Every driver wants to be perceived as a gold-level driver, regardless of what they say. Recognition is important.

Q: How does this program compare with previous efforts?

A: There is no comparison. We didn't have accurate data to distinguish one driver from another. The information we had wasn't sufficient to assign each driver a valid classification.

Traditionally, most carriers have rewarded drivers based on safety record. They might award a bonus for low fuel consumption, but not productivity. But now, when we send drivers loads, for example, the system tells them the best route to travel—that's part of the scorecard. If they go off route, the scorecard will reflect that.

Prior to integrating this program, drivers received a scorecard, but were paid bonuses only at the end of the year. We realized bonuses should be paid more regularly, as drivers accumulate points.

Most of our efforts were related to safety scores. The operational part wasn't present, so that is what we have built. We rewarded drivers for fuel purchase compliance, but now we address low idling and fuel-efficient driving, for example.

Q: In addition to grading driver performance, how are you empowering them to operate better?

A: We invited the driver who was getting the best mileage in our fleet to work as a manager. One year ago, we challenged him to research other methods to reduce fuel consumption. Then we started sending him out on routes to help other drivers optimize their fuel use.

Every week, he takes drivers out on a pre-determined route. First they drive, then he takes over. The third time, they drive and use tips he shares with them. We've been able to boost driver performance as much as two miles a gallon, which is huge.

Q: What is the next step?

A: HNI has decided to take this model to the market—albeit in a different format. By building a similar product, it can demonstrate to fleet owners the potential of incorporating a similar scorecarding program that increases safety and productivity performance.

Excellence to the Third Degree

Best Route— recognizes drivers who get from Point A to Point B via the most efficient route.

Hours of Service— credits drivers who properly maintain their electronic logbook and adhere to Hours-of-Service regulations.

Accidents— the more serious the accident, the greater the impact on the driver's score.