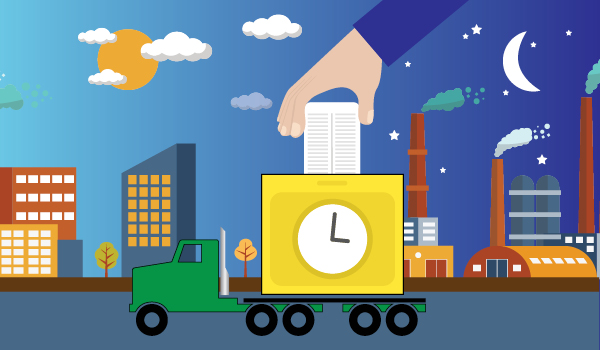 Response to ELD Mandate: Yours, Mine, and Hours

The Federal Motor Carrier Safety Administration's (FMCSA) deadline for truckers to install Electronic Logging Devices (ELDs) is nearly one year away, on Dec. 18, 2017. Small fleets, however, seem to be taking this mandate less seriously than their larger counterparts, according to a survey of 400 carriers by third-party logistics provider Transplace.

Eighty-one percent of large fleets have already achieved full ELD implementation, with the additional 19 percent working toward that goal. Conversely, only 33 percent of fleets with fewer than 250 trucks have reached full implementation, with another 29 percent in the process. The remaining 38 percent of small fleets report that they have no immediate plans to begin installing ELDs in their trucks.

"Implementation of ELDs has been significantly slower for carriers with smaller fleets," says Ben Cubitt, senior vice president, consulting and engineering at Transplace. "While some carriers are still researching the technology, others indicate that they are holding out in the hope that the mandate will be overturned in court. One carrier responded to the survey by saying, 'I will sell out first.'

"While much can happen between now and when the mandate takes full effect, most carriers—large and small—anticipate a noticeable impact to utilization and capacity," he adds. "The challenge will be to find the right balance of good safety practices without causing a significant disruption to the transportation industry."

As with any new regulation—especially one requiring a technology implementation—expect an adjustment period, and a few hiccups along the way. Carriers and fleets that wait until the final hour to implement ELDs could face negative repercussions, including non-compliance fines and penalties.

While brick-and-mortar stores still play a prominent role for the American consumer, it's hard to find someone these days who doesn't do at least part of their shopping online. Part of the e-commerce experience is fast shipping, and the key to fast shipping is distribution facility location. As such, the rise of e-commerce has had a substantial impact on the logistics real estate sector.

But the impact we've already seen on logistics real estate is just the beginning, according to The Global E-Commerce Revolution: What Does Its Impact on Logistics Real Estate Really Look Like?, a new report from industrial real estate firm Prologis. "E-commerce currently comprises about 20 percent of new leasing, up from less than 5 percent just five years ago," says Chris Caton, head of research for Prologis.

"There are multiple catalysts for growth, including the emergence of Asia; cross-border e-commerce; changing demographics, such as the growing spending power of millennials and their preference for online; and opportunities with virtual reality and its ability to disrupt categories that once seemed impervious to competition from online," he adds.

Global e-commerce sales are expected to reach more than $4 trillion by the end of the decade, according to the report. With such large numbers in play, retailers, distributors, and logistics providers are all scrambling to get prime distribution space near large cities (see chart above). "We expect to see an increased emphasis on locations within and adjacent to major population centers," Caton says. "Higher service levels, rising transportation costs, and increased retailer scale all are translating to greater demand for facilities located within and adjacent to these areas.

"We also expect to see an increased importance of third-party logistics companies with e-fulfillment capabilities," he adds. "3PLs have expertise in a complex field and help online retailers execute e-fulfillment."

There's still time to get into new facilities closer to major markets, but that space is filling up fast, the report shows. "We're seeing an earlier recovery of the sector out of recession and a stronger expansion," Caton says. "Vacancies fell to 5.2 percent, their lowest level in a generation. Rents have jumped from their trough, up one third from the bottom of the market and up nine percent from last year," Caton says.

For those online retailers who don't want to be left behind while their competitors offer services such as one-day and same-day shipping, it's time to start shopping around for new locations before there are no locations left to be had.

Today the U.S., Tomorrow the World?

With summer now well behind us, retailers and their shipping partners are preparing for the peak season rush. But it's possible that many businesses might be missing out on a large source of revenue. With global e-commerce sales expected to reach more than $1.9 trillion in 2016, retailers who fail to tap that market might find themselves unnecessarily short-changed come January.

"Many retailers are hesitant to embrace international e-commerce because the process can appear daunting," says Will Gensburg, vice president and managing director for UPS i-parcel, a division of UPS that helps companies globalize their online sales. "The key is to find strategic partners that are skilled in simplifying the complexities of cross-border trade.

At this late date, it may seem pointless to implement a solution aimed at globalizing holiday sales, but it's important for retailers to remember that, globally speaking, December isn't the only holiday season.

"One of the unique opportunities that global e-commerce offers is the ability to tap into the variety of holidays celebrated around the world," Gensburg says. "Build a calendar of the major holidays in your targeted international markets. Localize your marketing with both the products you feature and your marketing messages and promotions.

"For example, Chinese New Year is one of China's biggest events in terms of spending; about 754 billion yuan, or $115 billion, was spent with retailers and catering firms during the holiday in 2015," he says. "The next Chinese New Year is Jan. 28, 2017. Look into other holidays such as Diwali, Eid al-Fitr, Hanukkah, and Kwanzaa."

"Instead of offering deep discounts on warm weather goods at the end of the U.S. summer season, try promoting them in warmer climates such as Australia and other countries in the southern hemisphere," he suggests.