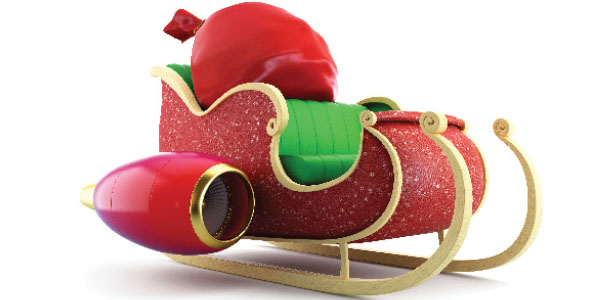 After the 2013 peak holiday season, e-commerce shoppers took to the phones and social media to tell e-tailers, and, ultimately express transportation companies, how they ruined Christmas. As it turns out, Santa actually drives a big brown truck, and he failed to get a substantial number of gifts under the tree before Christmas morning.

Analysts have hashed and rehashed all the reasons why UPS, FedEx, and other parcel carriers dropped the ball last year. Inaccurate forecasts, overreaching delivery promises from retailers, inclement weather, and a last-minute influx of packages generated from online orders top the list. Not to mention that consumers are conditioned by e-tailers and expedited carriers to expect delivery almost in real time, and even before they order.

But UPS believes it has taken appropriate steps to make sure 2014 goes differently.

"We are ready to deliver during the 2014 peak season," said Mark Wallace, UPS vice president of engineering, U.S. domestic operations, during a press tour of the UPS Worldport facility in Louisville, Ky. UPS invested $500 million in improving its capacity and processing abilities for peak season and beyond.

One noticeable improvement involves Black Friday. While UPS air cargo operations are always running on the day after Thanksgiving, the UPS Ground crew typically gets a holiday. No longer. This year, drivers will be working off their turkey meal by picking up and delivering packages on the biggest shopping day of the year in order to get a jump on what will be another short peak season.

More drivers will also be making those deliveries. UPS increased its package car fleet by 10 percent, or about 6,000 brown trucks. Twice as many of those drivers now have access to UPS' On-Road Integrated Optimization and Navigation (ORION) routing software, which optimizes pickup and delivery routes. About 45 percent of the company's drivers will have ORION capabilities before 2014's peak season begins.

But it isn't all about how many trucks are on the road. Packages have to get to the trucks first. UPS added 50 regular sorts at its hubs, increasing capacity by about five percent. It also opened three new automated hubs in Richmond, Calif., and Dallas and Laredo, Texas—all of which were problem areas during last year's peak season.

Additionally, a series of new mobile distribution centers (MDCs) increases flexibility in the company's network. The MDCs move by rail, and can be set up in a parking lot to act as a temporary home for as many as 90 additional trucks, helping to ease tight capacity in any region on relatively short notice.

Yet much of UPS's plan rests at the Worldport itself. On Super Weekend (the weekend before Christmas), four extra sorts are scheduled, essentially making the sort schedule run around the clock. And with more than 900 staging positions for trailers going online before peak (bringing the total to about 1,500), Worldport will act as more of a ground hub than ever before.

In addition to the physical enhancements, UPS made significant investments in technology. The company's focus has been on improving visibility of incoming shipments; and prioritizing express, perishable, and time-sensitive shipments.

UPS is also working with shippers, gathering data and trends to improve the accuracy of 2014 peak volume forecasts. Upgrades to the UPS My Choice program should allow receivers to more accurately track and direct shipments.

Will these improvements be enough to get all of those packages underneath trees by Christmas morning? UPS says they will. Only time will tell.

As a major port located in one of the country's largest coastal cities, the Port Authority of New York and New Jersey (PANYNJ) has a reputation for sometimes being difficult to ship through. But the port is fighting to counter that perception. Inbound Logistics asked Lenis Rodrigues, public information officer for PANYNJ, for an update.

IL: The port has announced plans for approximately $5.5 billion in capital improvements. What's in the works?

Rodrigues: Current major investments include raising the roadway on the Bayonne Bridge to 215 feet air-draft by summer 2016, and deepening the entire harbor to 50 feet by spring 2015. We are replacing the Goethals Bridge, and offering a Staten Island E-ZPass toll rebate.

Additional improvements include widening, realigning, and updating the port roadway network, due for completion in 2019; and completing the ExpressRail system with all terminals having on-dock rail service.

IL: Public-private partnerships have proven effective in enhancing transport infrastructure in other regions. Is PANYNJ leveraging private cooperation in this regard?

Rodrigues: PANYNJ partnered with New York New Jersey Link to replace the Goethals Bridge with a new state-of-the-art cable-stayed bridge as part of a $1.5-billion public-private partnership. This unique agreement will save the Port Authority an estimated 10 percent in combined construction and maintenance costs over the life of the agreement, versus the Port Authority's own project estimates, while minimizing impact to the agency's debt capacity.

IL: When will these investments begin showing practical benefits to those trading or considering doing business in the New York/New Jersey area?

Rodrigues: ExpressRail and road improvement projects will be immediately beneficial to shippers and consignees doing business in the port. There is always a need for additional capacity as companies focus on consolidating their logistics activity for local delivery and inland destinations.

IL: In the past, the New York/New Jersey region had a reputation of being difficult to do business in, due to congestion and cost. What is the port doing to reverse this perception?

Rodrigues: The PANYNJ and the president of the New York Shipping Association brought together representatives from all port stakeholder groups in December 2013 to identify challenges and examine broad, long-term recommendations to improve service, reliability, and efficiency. The task force consists of five working groups—Intermodal Equipment, Drayage Operations, Terminal Optimization, Express Rail, and Government/Community Outreach—that address a diverse set of concerns related to port productivity and performance. The task force also explored ways to address more immediate issues, recommending 23 solutions that they have begun implementing at the port.

Rodrigues: The PANYNJ began an incentive program to boost automotive business through the port. Under the five-year program, manufacturers new to the harbor receive 50 percent off the cost of using the Port Authority's wharves for every eligible vehicle—defined as an individual automobile or truck—that they import or export through the port during the first year they participate in the incentive program.

Existing automotive shippers can also participate in the program, receiving a financial incentive for all eligible vehicles that exceed their 2013 volume of eligible vehicles shipped through the port by more than three percent—the baseline growth rate the port has projected.

For example, if a manufacturer shipped 10,000 eligible vehicles in 2013, then every automobile shipped above the 10,300 threshold (10,000 plus three percent) qualifies them for the incentive. In 2015, existing auto manufacturers will need to exceed previous year totals by one percent to receive the incentive. The threshold for the remaining years of the program (2016-2018) will also be one percent.