Warehousing 2018: Rise of the Adaptive DC

As supply chains shift their moorings and settle into new realities—the permanence of e-commerce, sustainability, risk management, total landed cost sensitivity, and demand-driven strategies—distribution centers are evolving in kind. Stock characterizations of warehousing are falling to the wayside. DCs are becoming more complex and sophisticated; so are their labor forces. At the same time, companies are looking for more flexibility to hedge against change.

That's the consensus of Motorola Solutions' 2013 Warehouse Vision Report, which polls warehouse IT and operational personnel in the manufacturing, retail, wholesale, and third-party logistics (3PL) industries. The Schaumburg, Ill., data communications and telecommunications equipment provider offers a five-year projection of trends that are shaping distribution trajectories inside and outside the four walls.

As the economy begins to grow again, warehouse operations are expanding as well. But a litany of issues is changing the way shippers and service providers view DCs, according to Motorola. Among the challenges:

One of the more telling trends Motorola sees is shippers locating DCs closer to demand, says Jerry McNerney, senior director enterprise marketing, Motorola Solutions. He tells Inbound Logistics there will likely be more, smaller DCs purposed to perform customization and quick fulfillment to the customer in the next five years.

"Companies are now reviewing their network design every year, rather than every five years as in the past," McNerney says. "This has an immediate impact on the way businesses think about the permanence of their distribution network, facilities, and relationships with 3PLs."

Transportation is part of the conversation, as well. Understanding how site location and function impacts mode selection is important. "Transportation is by far the biggest cost in the equation, and the one businesses have the least control over because of fuel and labor," adds McNerney.

Changes in the distribution space are largely agnostic. Companies across verticals—manufacturers, retailers, and 3PLs—are feeling the same impulses. It's not just repurposing DCs from storage and retrieval to more complex supply chain processes; the warehouse is becoming a growth center.

Brick-and-mortar retailers face a predicament as they explore strategies to bring together their physical and virtual storefronts and supply chains. They need to balance flexibility with productivity.

"We're going to see DCs that are closer to doing it all," McNerney says. "For example, many retailers are considering their stores as just another warehouse. They are taking a holistic look at their entire inventory, no matter where it is. The question then becomes a matter of customer fulfillment."

Warehouse labor requirements are moving, as well. Function-specific roles are no longer practical as companies look to squeeze greater productivity out of more versatile workers who are as adaptive as the warehouse itself.

Technology and mobile applications empower this level of multi-tasking behavior. There's more information to capture, understand, and execute on—which raises the importance of warehouse managers who can see the big picture and carry a problem-solving toolbox. But a hierarchy in terms of decision-making control remains; companies are sensitive to inundating workers with too much information.

"Technology is intended to keep workers focused, not distract them," McNerney says.

Respondents to Motorola's 2013 Warehouse Vision Report predict these fundamental shifts in warehousing over the next five years: 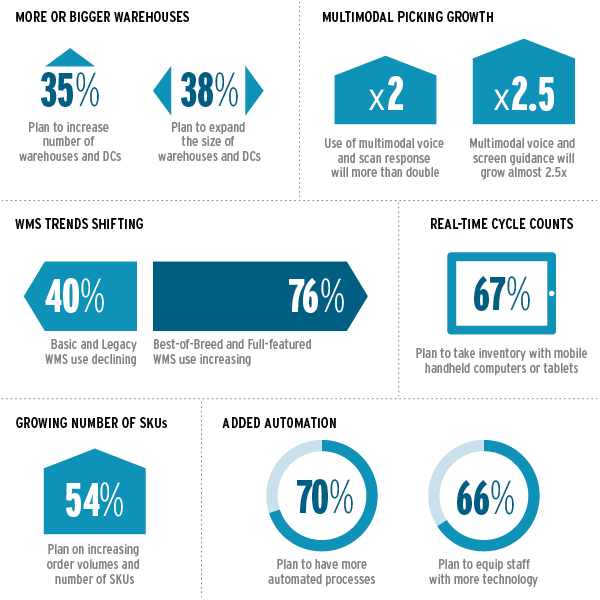 9 Steps to Protect You From Freight Bill Audit/Payment Fraud

Trendset Information Systems' recent malfeasance and insolvency raises a red flag for shippers who outsource freight bill audit and payment processing to third-party intermediaries. Trendset owes more than $25 million to shippers who had advanced carrier payments, only to learn those funds were misappropriated.

Today's environment exacerbates the potential for fraud. When interest rates dropped, vendors that were "living off the float" lost revenue—creating the scenario that shrouds Trendset.

U.S. Companies Get in the Zone

Amid all the cloudiness surrounding the U.S. economy and trade, one bright spot has emerged: companies are taking advantage of Foreign Trade Zones (FTZs). The value of exports from American FTZs increased by 147.9 percent between 2009 and 2012, to a record-high $69.9 billion in merchandise exported, according to figures released by the U.S. Foreign Trade Zones Board (see chart).

Success is attributed in large part to the growing number of U.S. companies buying and selling in global markets. In 2012, 400 additional U.S. companies began using FTZs, increasing the total to 3,200 firms, according to the National Association of Foreign Trade Zones.

There were 174 active FTZs during 2012, with a total of 276 active manufacturing and production operations. The FTZ Board approved five new foreign trade zones in 2012, and reorganized 38 zones under the Alternative Site Framework.

Exports from facilities operating under FTZ procedures totaled a record-high of nearly $70 billion in 2012. 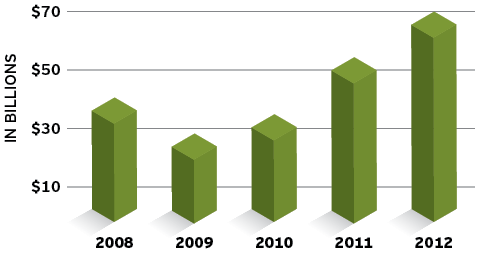