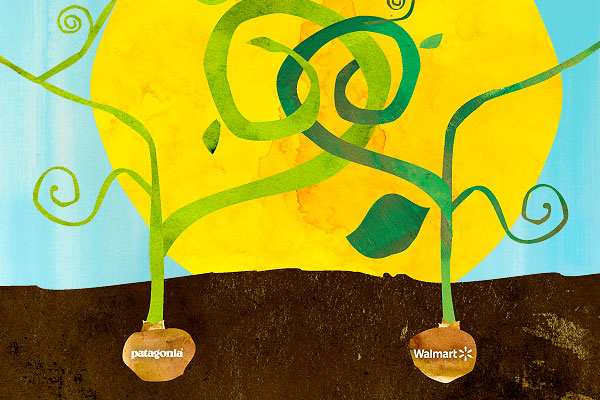 Patagonia and Walmart Grow Green Together

Sustainability mandates are fast becoming competitive differentiators for many companies, outwardly attracting green-thumbed consumers while inwardly reducing inefficiency and waste. But for outdoor clothing company Patagonia, being green is simply a matter of corporate karma.

The Ventura, Calif.-based clothier has been on the "greening edge" of environmental best practices since founder Yvon Chouinard started the business in the early 1970s and began donating 10 percent of annual profits to environmental causes. Everything Patagonia does, from vetting suppliers to building LEED-certified service centers to recycling used apparel, supports its broader stewardship.

So when Walmart approached the company one year ago for some direction with its own responsible sourcing initiative, competitive hubris took a back seat to global citizenry. Patagonia engaged the world's third-largest company and shared key insights into its own green metrics and sourcing protocol.

Walmart is currently in the process of rolling out a comprehensive sustainability index that will help enforce supplier compliance with specific green benchmarks. Apart from creating a more transparent pipeline and rewarding suppliers that conform to its requirements, shoppers will have more information on the greenness and quality of the products they purchase.

The three-phase process began last summer with a 15-question survey solicited to more than 100,000 suppliers around the world. In time, Walmart plans to create an online consortium of universities, suppliers, retailers, non-governmental organizations, and government officials that will work toward developing a global information database on product lifecycles. Finally, it will make all this information available to consumers.

When announcing the index, Walmart CEO Mike Duke stressed the inclusiveness of this effort: "It is not our goal to create or own this index," he said. "We want to spur the development of a common database that will allow the consortium to collect and analyze the knowledge of the global supply chain."

Walmart's altruism is good for publicity. But Patagonia's willingness to provide some empirical objectivity is striking. Sustainability and transparency are big priorities for Patagonia—so much so that it specifies partners who proactively reduce their environmental footprints and publishes supplier contact information on its Web site.

Patagonia learned from its own growing pains, which perhaps offered Walmart even greater perspective. When the company began expanding its offshore supplier network in the late 1990s to find cheaper manufacturing partners, it ran into problems. Tier-one suppliers were subcontracting work to unknown parties, visibility was lacking, and Patagonia couldn't hold them accountable to its strict standards. So it stepped up third-party auditing at these facilities and, in 2002, added a manager of social responsibility to monitor compliance throughout its supply chain.

Walmart's motivation to seek outside perspective and Patagonia's openness to share best practices are notable. But the "green party" is here to stay and examples of environmental collaboration among business partners and competitors is becoming more commonplace for two specific reasons.

First, Walmart's influence on corporate culture and business strategies carries a lot of weight. Smaller enterprises such as Patagonia can use the green badge as a novel hook to attract like-minded consumers. But when a Fortune 100 company with far greater clout and a more diverse customer demographic tows the same line, its impact resonates. Patagonia can match green demand; Walmart manufactures it.

Secondly, companies that don't publicly market their green records, or are exposed by failures, lose favor in the court of public opinion. If competitors make a commitment to sustainability and customers buy that sell, the herd mentality kicks into gear, creating a ripple effect across the supply chain.

The benchmarking tool is designed to encourage year-on-year improvement among suppliers, regardless of size or business volume. Partners will have a full year to report data before the scorecard can adversely impact their rating.

P&G intends to use the sustainability scorecard as part of its annual supplier performance measurement process. And, like Walmart, the company hopes the new initiative will have far-reaching impact across all industries and that partners will use the scorecard within their own supply chains. So not only is Walmart holding suppliers accountable; its suppliers, notably P&G, are making sure their suppliers are compliant, too. Imagine the cascading effect this will have across the supply chain.

Patagonia has held similar sway among its supply chain partners and competitors. In 2007, the company partnered with Switzerland-based Bluesign Technologies to employ its industry standard for inspecting the ingredients and processes used in textile manufacturing. The criterion ensures products only contain components and pass through processes that are harmless to people and the environment. Compliance creates transparency throughout the textile production chain without compromising functionality, quality, or design. Patagonia was the first to join with Bluesign Technologies. Now Helly Hansen, The North Face, and REI are "competing partners" as well.

Collaboration the likes of Patagonia and Walmart is unique, if for no other reason than the contrast between companies—one a niche outdoor apparel brand, the other a ubiquitous brand equalizer. Each offers a different perspective and value. Patagonia has spent nearly 40 years cultivating sustainable best practices. Now it has found a willing partner that can merchandise and mandate its ethos to the world.

Participants were asked if their companies had formal green/environmental sustainability programs in place, and 80 percent indicated they did. Moreover, 57 percent of these companies have also established a management position to oversee company efforts in that area.

None of the companies report scaling back sustainability goals due to the recession. In fact, 63 percent say they expanded existing green programs during the previous year, while 71 percent indicate they launched completely new initiatives during the same time frame.

The study also finds that 80 percent of CEOs netted positive results from their sustainability programs, reducing operating expenses and having a beneficial impact on employees.

“Compared with other industries, 3PL service providers are ahead of the sustainability game,” says Dr. Robert Lieb. “They appear to be planning for the long term by recognizing emerging customer preferences and providing services consistent with them, even during a market downturn.”