Amazon CEO Jeff Bezos announced in 2013 that Amazon Prime Air would use unmanned drones to deliver packages to your door in 30 minutes or less. The online retailer has since claimed that it is only waiting for the government to make drone package delivery legal.

Several concessions will need to be made to allow for commercial use. For example, unless provisions are added to allow UAVs to fly out of their pilots' line of sight, Amazon's testing, research, and development will likely remain overseas. Additionally, current rules prohibit drones from flying at night, and operators are allowed to fly only one drone at a time.

Google, however, has had some recent drone success. In 2014, the company filed for a patent for Project Wing, a drone delivery model that uses a mobile delivery receptacle on the ground (which appears to be a box with wheels) to receive packages from drones. The drone delivers the package into the ground vehicle, which then returns to a secure location where it is either delivered to its final destination by a carrier or picked up by the customer. The patent was approved in January 2016.

When Google announced Project Wing, it hoped to implement the service by 2017. Dave Vos, the project's leader, thinks that's still a possibility. "Look up into the sky in 2017 and you could see drone deliveries happening on a regular basis," Vos said at an Aero Club aviation event in January 2016.

FAA revisions to existing rules are expected sometime in 2016. If those revisions allow for commercial drones to operate in the United States, Vos's dream might become reality. But the FAA is taking its time because previous projections revealed it was likely that more than 7,000 companies would obtain licenses to operate drone fleets once commercial UAVs became legal.

Google has already done most of the legwork for Project Wing; it began testing the drones in Australia in 2014. Amazon has also done testing overseas, so it's likely that Prime Air would also be ready to go once the FAA gives the green light. And it's not just retailers. Parcel carrier DHL has been testing drones in Germany since 2013.

"I advocate strongly that the need for additional regulation is small," Vos said during a speech at a Consumer Electronics Conference in Las Vegas. "In fact, if you allow people to replicate what manned aviation pilots in this airspace do, it already works.

"We don't need new regulation; we need to just be allowed to go do it," he added.

With customers now demanding that companies not only deliver free, but fast, it seems like drones are all but inevitable. Let's see if the FAA agrees.

The pharmaceutical supply chain has always been complex, and 2016 will be no different. Here are the top five challenges pharma manufacturers and logistics providers will face in the coming year, according to The Challenges, Solutions, and Strategies Driving Pharmaceutical Supply Chain Innovation, a cooperative whitepaper from research partners Kenco and LogiPharma.

Supply chain executives in the pharma industry need to be able to make changes based on demand fluctuations, and respond quickly to any potential disruption. To do that, they need as much end-to-end supply chain visibility as they can get. A 2015 LogiPharma survey reveals that gaining visibility is the largest concern among pharma executives for 2016 (see chart, left).

Many companies find the answer in enterprise resource planning (ERP) systems. Traditionally a tool of large enterprises, small pharma businesses are beginning to see the benefits of an ERP system. While 21 percent of respondents aren't currently using an ERP, half of this group are actively working to install one, according to the survey.

The pharma industry has spoken: Supply chain optimization is the cure for what ails you.

A transparent supply chain enables the visibility that allows planners to diagnose potential disruptions early and make changes based on demand. 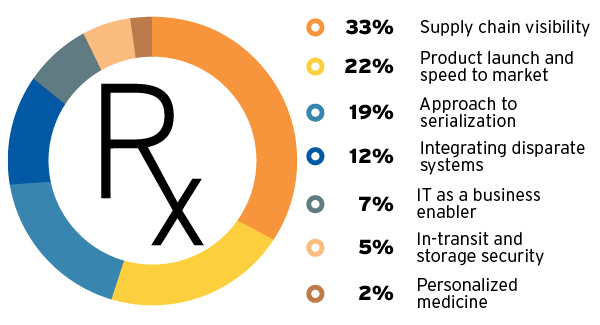 Retailers, distributors, suppliers, and logistics firms remain optimistic despite the challenges they face as they tackle growing customer expectations, according to SPS Commerce's fourth annual Retail Insight industry benchmark report. Two key trends emerge from the report: E-commerce and stores have switched places as the top growth driver; and suppliers are not keeping up with the omni-channel retail demands of digital consumers and their retail customers.

The Retail Insight benchmark study, which surveys members of the SPS Retail Network, reveals the following: 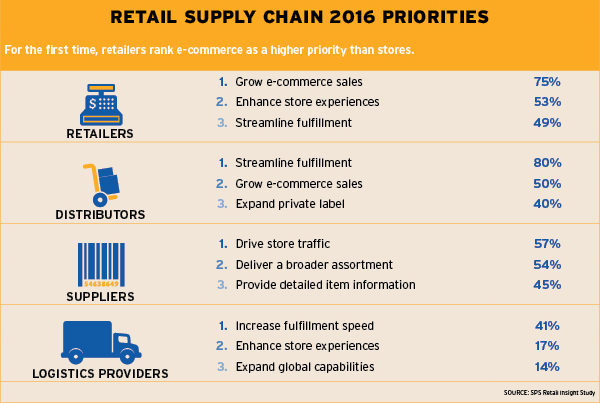 Putting the STB Back on Track

Over the past few years, things have gone off the rails in the United States. Since the shale oil boom began affecting markets and transportation in 2008, Class I railroads have increasingly given oil cargo preference over agricultural freight, causing significant delays for the perishable cargo and substantial injury to farmers' pocketbooks.

The Surface Transportation Board (STB) Reauthorization Act was passed by Congress and signed into law by President Obama to remove obstacles that stop the federal oversight organization responsible for the U.S. freight rail system from intervening. This new overhaul increases the agency's ability to investigate disputes, sets timelines for rate reviews, and increases the size of the board from three members to five to streamline decision-making.

"Enacting this legislation will make the Surface Transportation Board more accountable and effective in addressing rail service and other disputes," says Senator John Thune, who sponsored the bill in the Senate. "Heading off problems between rail customers and carriers whenever possible, and quickly resolving them when they do occur, is at the heart of this effort to make the STB work better."

The American Association of Railroads (AAR) also voiced approval of the measure. "It strikes the balance of preserving market-based structures for shippers and railroads while also providing common sense process improvements to help the board work more efficiently," says Ed Greenberg, spokesman for the AAR.

"Hopefully it will put the board in the position where it could be more effective in responding to both the railroads and the shipper community," Thune adds.

As the United States becomes less dependent on foreign oil, and the Keystone XL pipeline project remains in mothballs, more oil will continue to flow down U.S. railroad tracks. Agricultural stakeholders hope that the STB changes are a step toward keeping all cargo moving effectively, and not just oil.