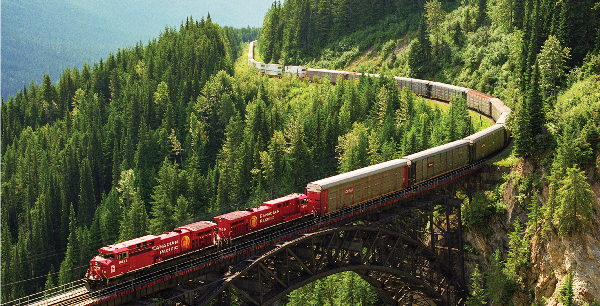 Canadian Pacific: All Aboard the Profit Train

Canadian Pacific reported total record revenue of $6.1 billion in 2013, with net income rising almost 50 percent compared to 2012. The railroad's operating ratio—a measure of operating costs as a percentage of revenue—improved 7.1 points to a record 69.9, breaking into the much-ballyhooed 60s for the first time.

Harrison, celebrated for his precision railroading approach honed during stints with Illinois Central and Canadian National over the past 20 years, discussed the railroad's transformation during the November 2013 Rail Trends conference in New York City.

Canadian Pacific's formula has been fixed on improving service, creating better asset utilization, controlling costs, and changing the corporate culture. "It's not complicated," says Harrison. "Changing people's behavior has been the driving force in our early success."

Harrison downplays the difficulty of this strategy. But it has forced the railroad into some resolute decisions, such as reducing the workforce by 4,500 people. "Ninety percent of this has been through attrition," he adds.

"I came into an organization that hadn't enjoyed much success over the previous 10 to 15 years," Harrison says. "It was called the worst operating railroad in North America, and employees didn't like hearing that they were the worst.

"So, from top to bottom, we instituted a simple, understandable formula. We told employees: 'We have to make changes, and you will have to accept them," he recounts.

His team hit the tracks running. They closed down four hump yards in three days — an action that might have taken any other Class I railroad four to five years. "When people start to see change, it energizes them," Harrison notes. "They start creating change themselves because they learn they're going to get run over if they don't."

Rationalizing the network has been one key initiative. Hump yards were effective for what was required in the 1950s and 1960s, Harrison explains. Pre-intermodal was a completely different business model, and a different mix of business. Grain was still moving in 40-foot boxcars. Most traffic needed to be sorted, classified, and switched. That's not the case today.

"I grew up in a hump yard, and I love this industry," he says. "But I also love to make a buck. You can't have your model train and have fun unless you can bring something to the bottom line."

Canadian Pacific saw an immediate impact after it shut down the four yards. Service improved 40 percent, while costs came down 30 percent.

Harrison has been equally committed to changing the corporate culture from the ground up. The railroad reached five-year deals in all of its collective bargaining agreements, save two — a reality that he describes as "unprecedented and progressive."

"We did a simple thing: Every non-union exempt worker, on condition of employment — unless there is a medical condition — is becoming a qualified, certified conductor/engineer," Harrison says.

"That has created great change," he adds. "Workers now appreciate what goes on at 3 a.m. on Saturday when it is 27 degrees below zero. It's a lot different than walking into the warm corporate headquarters at 9 a.m. Monday, wondering what happened over the weekend."

Canadian Pacific's culture change is ongoing. Industry analysts speculate that Harrison's vision of making the railroad a Class I leader in operating ratio, thereby the most efficient, is not beyond reason. They expect Canadian Pacific to best its seven-percent revenue growth forecast and 65 percent operating ratio target for 2014.

"The shock is resonating throughout Calgary, Canada, and parts of the United States — and it will continue," says Harrison. "And this story is far from over. There are many more things in the hopper that need to be done."

Many shippers miss out on potential cost reductions and efficiencies because their supply chain and finance organizations don't work together. Only 25 percent of companies recently surveyed by London-based consultant Ernst & Young (EY) have achieved such collaboration. The report also suggests that global supply chains deliver better results when CFOs are involved in the loop.

Forty-eight percent of respondents at companies in which finance and supply chain executives have close business partnerships report a more than five percent increase in earnings before interest, taxes, depreciation, and amortization in the past year. By contrast, only 22 percent of respondents at companies with a more traditional relationship between finance and supply chain executives report similar increases.

Companies increasingly recognize climate risk in their supply chains, but investment in emissions reduction programs is thawing, according to a new report by London-based Carbon Disclosure Project (CDP) and research firm Accenture.

The study points to an ever-widening gap—highlighted in 2013—between measures taken by large corporations who are members of CDP's supply chain program and those taken by suppliers.

Almost 75 percent of respondents identify a current or future risk related to climate change—global warming or cooling, disease, droughts, and regulations, among other factors—while 56 percent say that consumers are becoming more receptive to low-carbon products and services. Regulatory uncertainty is making companies cautious about investing in emissions reduction and supply chain sustainability. Ninety percent of companies that identify a current or future risk cite regulatory risk as a barrier to investment.

Investment in emissions reduction programs declined in 2013, and is shorter term in focus, according to respondents. Seven out of 10 sectors report investment falling from earlier years (see chart). Shorter payback initiatives (less than three years) are on the rise—nearly doubling between 2011 and 2013. The average sum invested per reporting company dropped 22 percent since 2012.

Investment in Emissions Reduction Across Sectors

A few industry sectors report an upward trend in emissions reduction investment in 2013, while others invested less than in 2012, 2011, or both. 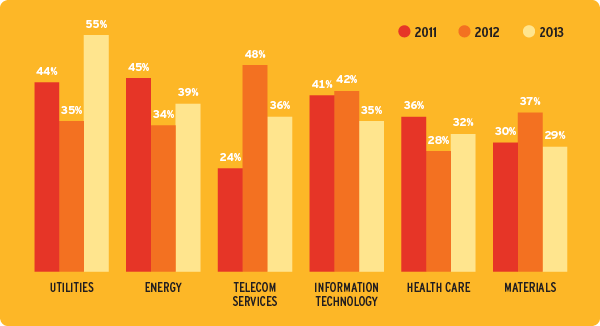 Do You Have The Seal of Approval?

The deadline for high-security seal requirements pursuant to the new ISO17712:2013 standard for mechanical seals is fast approaching. International shippers need to make sure they and their seal suppliers are compliant.

The new version of ISO International Standard 17712, Freight containers—Mechanical seals, published in May 2013, contains a significant change in Clause 6, Evidence of Tampering. The new requirements go into effect May 15, 2014.

The impact on international commerce could be significant because of the way regulators, major shippers, carriers, and others use ISO17712: virtually all maritime containers will require high-security barrier seals certified by accredited third parties to conform to the new requirements.

All users of ISO17712 High Security Seals/C-TPAT compliant seals, should ask their suppliers for the necessary documentation proving the seals will still be compliant after the May 15 deadline.