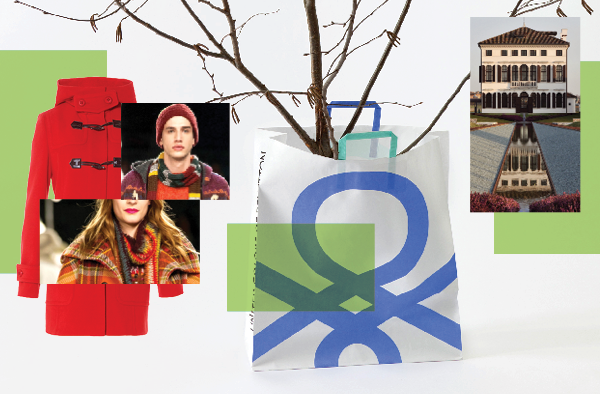 Green: The United Color of Benetton

Sustainability has gained fashion appeal over the past few years. But apparel companies are growing even more sensitive to social responsibility, especially as it relates to materials procurement and use in the supply chain.

Benetton Group is the latest apparel brand to join Greenpeace's Detox Program, launched in 2011 to expose the use of hazardous chemicals in garment production. The Italy-based retailer joins a growing roster of companies—Nike, Puma, Marks & Spencer, and Zara—participating in the program.

Similar to other fashion businesses that have signed Greenpeace's pledge, Benetton promises to end the release of hazardous chemicals throughout its global supply chain by 2020. This latest move mirrors other measures the company has introduced over the past few years, including a switch to biodegradable and recyclable clothes hangers, more eco-friendly white kraft paper bags printed with water-based ink, less packaging, and improved monitoring of emissions throughout its operations.

Greenpeace's advocacy and consumer proclivities for responsibly made products are forcing companies to consider the entire lifecycle of their products—from the materials they use, to the way they recycle and dispose of items after they leave the marketplace.

This growing consciousness is partly a consequence of technology catching up to reality, according to Bob Jaffin, supply chain consultant and author. Many synthetic chemicals introduced in the late 20th century, and now common in various manufacturing processes and products, were engineered without adequate knowledge or recognition that additional testing protocols and instrumentation were necessary to explore their impacts and measure their long-term effects.

"Manufacturers and consumers need to understand that products and processes recognized for years as being new and innovative are now proven to be dangerous," Jaffin says.

These products include a laundry list of toxic chemicals—from dry-cleaning fluids and lead-based paints, to petroleum-based printing inks and DDT insecticide. But, as in other examples across industry, innovation is often a matter of trial and error.

"Even though it is now banned, without DDT we never would have gotten to the point where we found its replacement," Jaffin adds. "We wouldn't have reached the global crop required to support growing populations."

Apparel manufacturers and suppliers find themselves in a similar learning curve as they look more closely at the types of materials they consume, and explore alternate solutions. Benetton is in the process of publicly disclosing chemicals applied throughout its supply chain as they are phased out. For example, the retailer will instruct suppliers that alkylphenol ethoxylates, commonly found in detergents and other chemicals that textile and leather processing companies use, must be replaced with safer alternatives. It also plans to eliminate toxins such as perfluorocarbon, as well as update its chemical-use policy.

These changes are happening at break-neck speed in the apparel industry, and share many commonalities with what other industries—notably electronics and food—have already done to bring greater accountability and transparency into the supply chain. Few can argue against the ethos that is driving supply chain sustainability and safety improvements; there is even less doubt about its future impact.

Texas vs. Amazon: This Time It's All Business

There isn't always a second chance to make a first impression, but Texas and Amazon have learned an important lesson—don't mess with each other. Nine months after Amazon struck a deal with Texas to settle a lingering sales tax debt by pledging to bring thousands of jobs and invest millions of dollars in the state, it is beginning to deliver on that promise.

"We look forward to putting more than 1,000 Texans to work at our new fulfillment centers in Schertz, Coppell, and Haslet," says Mike Roth, Amazon's vice president of North American fulfillment. "We appreciate the state and local elected officials who helped us make this exciting investment in Texas."

Amazon's tone is a far cry from a letter written by Dave Clark, vice president, North American operations, which was circulated among employees two years ago.

The crux of the dispute focused on what defined a physical distribution presence—and whether Amazon was therefore liable for collecting sales taxes on in-state orders.

But one year later, Amazon and Texas worked out their differences and a $269-million assessment the state comptroller's office had levied against Amazon for its outstanding tax debt. Now, the Internet retailer is following through on its end of a four-year deal to create 2,500 new jobs and contribute $200 million in capital investment to Texas.

Amazon and Texas ultimately compromised on the settlement. Initially, the company offered to bring 6,000 jobs and invest $300 million in return for a four-and-a-half-year sales tax exemption. The Texas Legislature rejected that offer and in-state customers began paying sales tax on Amazon purchases in April 2012.

While much current transportation and trade news centers on the emerging potential of natural gas and shale oil, the Alaskan Brewing Company has divined its own source of renewable energy. The Juneau-based craft brewery is using beer—specifically the spent grain left over from the brewing process—as the sole fuel source for its new steam boiler.

The brewery installed a $1.8-million boiler in 2012 that uses the mashed-up, waterlogged grain to create steam in order to keep kettles cooking. Alaskan is the first craft brewery in the world to use by-product in such a way, reducing the company's fuel oil consumption in brewhouse operations by as much as 70 percent.

While other breweries have found useful secondary markets for spent grain, often sending dregs to local farms as feed, the Alaskan supply chain is uniquely constrained. Absent a large agriculture industry, and further hampered by land-locked and costly transportation options, the beer company began exploring different options in 1995 with the installation of a grain dryer. The equipment dried wet, protein-rich spent grain in preparation for shipment to the lower 48 states for use as cattle feed.

Alaskan designed the dryer to use up to 50 percent of the grain as a supplemental fuel source, providing expertise that would prove useful in designing the steam boiler.

In 2008, Alaskan became the first craft brewery in the nation to install a mash filter press, which provides greater energy, water, and materials efficiencies, and produces a lower-moisture-content spent grain that lends itself for use as fuel.

Alaskan expects the new boiler to eliminate fuel oil in the grain drying process, and displace more than half the fuel needed to create process steam in the brewhouse. With moderate growth assumptions, the beer company expects to save nearly 1.5 million gallons of oil over the next 10 years.

Apple sometimes makes it look easy, but operating a complex and convoluted global supply chain is no small task. The iconic brand redefined go-to-market with a product pipeline that routinely spits out new iterations of phones, tablets, and computers. As testament to its operational pedigree, the company has become a regular leader in Gartner's annual Top 25 Supply Chain rankings.

But challenges remain, some of which—such as current media speculation that iPad Mini sales are cannibalizing MacBook revenue—are uniquely born by the company's own success.

So Apple CEO Tim Cook's response to rumors that the company is scaling back iPhone 5 production amid waning sales cut straight to the core.

Such rumors are founded on a "single data point," Cook explained during Apple's quarterly earnings conference call, and recommended not to base assumptions on limited data. "The supply chain is very complex, and we use multiple sources for our products. Yields and supplier performance might vary.

"Even if one data point were factual, it would be impossible to interpret what it meant for our business," he added.

The project will feature a 2,360-foot track and 1,570-foot rail spur to offload materials at the steel company's new and existing facilities. The TEA grant covers about half of the project's $1.2-million cost, with the difference shared by the city and McNeilus Steel.

Elsewhere in Wisconsin, the town of Hubbard was awarded a $272,439 TEA grant from WisDOT that will cover half the construction costs of a 1,100-foot rail spur to serve a Menard's manufacturing facility. The home improvement retailer will subsidize the remaining expense.

Under Governor Walker's helm, Wisconsin has progressively enacted freight transportation reform, including measures to increase truck weight restrictions, streamline permitting, and ease seasonal and regulatory restrictions for agriculture and dairy farmers. In 2011, the state hosted the first Freight Summit for manufacturers, shippers, growers, and carriers to come together and talk about important transportation issues within Wisconsin.