Transportation infrastructure funding remains a hot topic on Capitol Hill while legislators continue to bandy about ideas to satisfy a long-overdue highway reauthorization bill. Out on the rails, however, the railroads continue to lead by example.

The largest component of the capital plan is spending $2.1 billion on BNSF's core network and related assets. The rail carrier also plans to allot approximately $1.1 billion for locomotive, freight car, and other equipment acquisitions.

"BNSF remains committed to making the necessary investments to maintain and grow the value of our capacity to meet customers' needs and provide the nation's supply chain with more efficient freight transportation," he adds.

Keep a close eye on your freight—the number of cargo theft incidents in the United States increased by 8.3 percent in 2011, according to Freightwatch's 2011 U.S. Cargo Theft Report.

The number of incidents of theft hit the highest recorded level, according to the Austin, Texas-based global logistics security solutions provider. Despite the increase in frequency, however, the average value of goods stolen per theft dropped.

In terms of the types of thefts, the majority (88 percent) of incidents were full truckload or full container thefts, followed by facility burglaries (three percent).

3PL Partnerships: One for All or All for One?

The trend toward transportation and logistics outsourcing has always been counter-cyclical, triggered by economic pressures to reduce costs and grow efficiencies. So it comes as little surprise that companies in today's market are leaning on third-party logistics (3PL) providers to allay risk and uncertainty, capitalize on functional expertise, tap fluid technologies, and access capacity.

While 24 percent of businesses surveyed for the 2012 Third-Party Logistics Study—produced by Capgemini Consulting, in concert with Penn State University, Heidrick & Struggles, and Panalpina—are bringing outsourced logistics functions back in-house, a 64-percent majority is increasing its use of 3PL providers. Fifty-eight percent of surveyed shippers are consolidating the number of 3PLs they use, however, a signal that shippers may be enforcing higher performance standards from their 3PL partners, says the study.

Twenty-one percent of 3PLs indicate customers should partner with more than one service provider, while only 11 percent feel customers should work with only one partner, according to the IL survey. The lion's share (68 percent) believes the decision is conditional. In IL's 2010 survey, only 19 percent leaned toward multiple partners.

Shippers answering the same question in IL's survey are more entrenched in their preferences, with 26 percent favoring the use of only one 3PL partner and 33 percent preferring multiple 3PLs. When asked how many 3PLs they actually use, 77 percent say more than one.

Shippers are diversifying their 3PL footprints for many reasons, and Capgemini's rationale—enforcing higher performance standards—is among them. An explosion in 3PL talent and expertise may be leading companies to specify best-of-breed service providers by functional niche, geography, and technology. Shippers have the luxury of demanding excellence.

"3PLs understand where and how they can provide value to customers," states IL's 2011 3PL Perspectives. "But they also recognize that shippers have greater flexibility and opportunity to localize specific needs and match outsourcing partners accordingly. The supply chain has become so integrated with 3PLs partnering together, and with carriers and IT companies, that shippers naturally tend to compartmentalize outsourcing. The re-emerging efficacy of 4PLs and lead logistics providers reinforces this trend."

Asset-outsourcing shippers also consider working with multiple 3PLs as a means to access capacity and create redundancy—two concerns that companies will have to address when the economy rebounds and driver shortage fears resurface.

But some signs point to 3PL consolidation in the market. Companies are looking for leverage wherever they can find it. Just as core carrier partnerships have come back into vogue among trucking buyers, similar developments have occurred on the warehousing side.

"Scale plays a large role," says John Wagner, president of Wagner Industries, a 3PL based in North Kansas City, Mo. "If a company has 15 stocking locations across the country but is only using 25,000 square feet, that doesn't offer much consolidation opportunity. Companies are bringing 3PLs in to take over management operations within a facility. That's where we can add value."

3PLs are in the business of providing value—and constantly proving that proposition—so they have incentive to become more vested in a customer's business. Some companies benefit from consolidating their warehouse footprints and service providers, sharing space, and reaping economies of mass. To a degree, outsourcing shrinkage reflects contraction as a consequence of broader economic forces.

But the one-size-fits-all approach to outsourcing is increasingly the exception more often than the rule, especially on a global scale. Too much complexity, risk, and 3PL excellence exists in the market to fully scale back 3PL partnerships. And logistics service providers, to their credit, are becoming more amenable to working with each other to provide complete solutions.

"I recently submitted a proposal to a prospect that wants to outsource DC operations and transportation," Wagner notes. "But the scale of the transport piece would choke our existing operation. So I partnered with a large transport company and offered a joint solution."

Ultimately, it comes down to what the shipper wants and whether a logistics service provider can meet that need while satisfying customer service expectations.

Shippers Continue to Outsource a Variety of Logistics Services 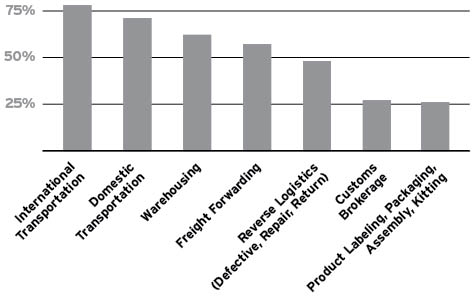 While debate rages about the consequences of global warming, an unlikely upside could support greener transportation practices.

The Port of Indiana-Burns Harbor welcomed a rare lake vessel visit in January 2012. The 700-foot James Kuber, a lake freighter that was converted into a self-unloading articulated tug barge in 2008, exported approximately 16,000 tons of local corn from Cargill to an ethanol plant in Sarnia, Ontario.

Articulated tug barges have the hauling capacity of large ships but are powered by tugboats, a common method for rehabilitating older ships. Indiana-Burns Harbor's international shipping season officially closed at the end of the year when locks on the St. Lawrence Seaway were "locked" for the winter. But, weather permitting, vessels can continue to run limited routes within the Great Lakes that do not pass through locks.

"This is the first lake vessel that has called on the port in January since 2006," says Peter Laman, port director at the Port of Indiana-Burns Harbor. "The mild weather has kept ice from forming on the lakes, which generally limits shipping this time of year. Businesses can still ship and receive cargo on river barges or lake vessels, as long as the weather and ice allow them to get through."

The ranks of women bearing logistics degrees in the supply chain profession are growing, according to the Council of Supply Chain Management Professionals’ (CSCMP) annual Career Patterns for Women in Logistics report.

The survey, which gauges educational backgrounds and aspirations, found that the majority of respondents (57 percent) had achieved graduate-level education, while 37 percent had studied at the undergraduate level and 13 percent possess professional certifications.

The MBA is the most frequently earned graduate degree, although other masters and doctorates are also represented. About one-third of respondents (31 percent) earned a degree or concentration in logistics at either the undergraduate or graduate level.

All that education is paying off. Fifty-three percent of respondents attained director or manager positions within their companies (see chart). 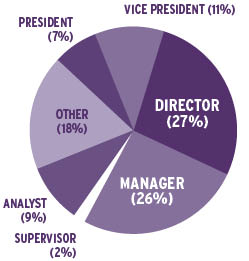