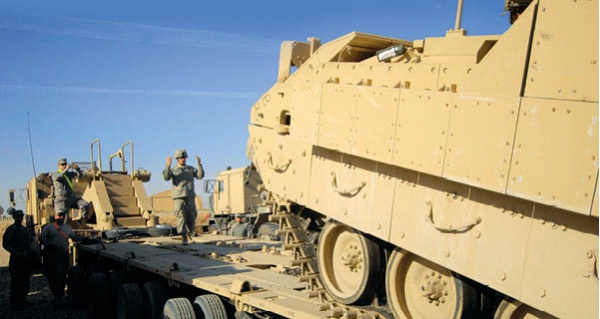 In The Art of War, Sun Tsu teaches that "every battle is won or lost before it is ever fought." It is a reminder of the planning and logistics necessary to move and replenish supplies and armaments during successful military operations. The completion of a three-year study conducted by the University of Alabama in Huntsville (UAH) on behalf of the U.S. Army provides further credence to Tsu's teachings.

"The Army wanted us to think about how they conduct business from a logistics and supply chain perspective," says Dr. David Berkowitz, associate dean and principal investigator at the Integrated Enterprise Lab in the UAH College of Business Administration. "They needed us to show them how to assess their data and report it in a way that would give them a forewarning."

The study—initiated by Army Aviation and Missile Command, and later expanded by Army Materiel Command—involved UAH researchers, students, and a team of other faculty and staff examining performance, wait times, quality, and reliability along the supply chain. They evaluated how the Army assessed inventory based on demand for each item, then the predictable wait times for shipping those items. The team also factored in supply disruptions based on unpredictable factors, such as power outages or factory problems.

"You can never say with 100-percent certainty that the supply chain will work a particular way," Berkowitz says. "All you can do is set up the tolerances, see where they've been violated, determine the root cause, and devise a workable solution to get back on track."

Researchers analyzed the Army's supply chain on all levels, from senior leadership to item managers. They then developed end-to-end supply chain metrics that funneled data from multiple sources into a single supply chain dashboard for analysis and reporting.

The team used information from the civilian and military worlds as part of its research. They visited a Ford factory, John Deere tractor manufacturer, Army depot, and Army transmission supplier. Each supplier was graded on customer wait times, then the team incorporated those elements into its recommendations.

UAH researchers and military officials expect this research will create measurements to help the Army manage its supply chain and predict shortfalls.

The Big Box battles are heating up as Walmart recently followed Target's example with its decision to stop selling Amazon Kindle e-readers and tablets in the lead up to the 2012 holiday shopping season. The move comes as Amazon continues to stoke competitive interests with its brick- and-mortar peers, while Walmart and Target look to grow their online presence.

Increasingly, the Kindle has become a shopping cart of sorts for mobile consumers, allowing them to compare and buy millions of SKUs beyond digital books. Walmart and Target were selling Amazon's trademark product in their stores, thereby cannibalizing potential sales. Now they have both smartened up.

While Target and Walmart will now focus on other tablets and e-readers—notably Apple products—Amazon may be in store for its own retailing incarnation. Absent a presence in two major retail chains, speculation abounds that the company may consider opening its own stores to sell Kindle and related products. The rumor adds further kindling to a fire Amazon sparked earlier in 2012 when it acquired Kiva Systems and its robotic warehouse automation capabilities as a measure to improve productivity within its own e-fulfillment operations.

Not to be outdone, Target is looking to quell the e-commerce storm by matching some online retailers' prices—including Amazon, Walmart, BestBuy, and Toys R Us—during the 2012 holiday season.

The drought that hit the U.S. midwest in spring 2012, and impacted grain production throughout the heartland, is now bringing Mississippi River trade to a halt. Water levels are expected to hit record lows by the end of 2012, delaying barges carrying everything from grains and coal to steel and petroleum, according to Bloomberg News.

The U.S. agriculture industry, which has experienced an upswing in grain exports over the past few years as Asian demand grows and mandates for energy independence tighten certain ag markets, is likely to lose out as crop production—and their means to market via the Mississippi River—ebbs. Corn harvests are expected to yield 13 percent less than 2011, despite the fact that farmers planted the most acres since 1937, reports the U.S. Department of Agriculture.

Mississippi River barges handle 60 percent of grain exports moving through the U.S. Gulf Coast, and the threat of the waterway becoming too shallow where it joins with the Ohio River could have significant financial repercussions for U.S. growers. Apart from heeding barge draft and tow restrictions, ag shippers will be forced to rely on the railroads to help divert cargo. Railcar shipments through late October and into November were up 12 percent compared to the same period in 2011, and that trend is likely to continue as agribusinesses and growers look to secure capacity.

Cadbury has already committed to invest $70 million in its sustainable supply chain program between 2008 and 2018, and has seen significant success in Ghana, where cocoa farmers have increased yields 20 percent. Mondelēz is looking to follow suit with funding earmarked to support 75,000 farmers in Côte d'Ivoire, the world's largest cocoa-producing country. The program also targets operations in Indonesia, Brazil, Ghana, India, and the Dominican Republic, with the objective of improving the livelihoods of cocoa farmers while accelerating the adoption of sustainability best practices.

The move comes as global food companies face increasing scrutiny in how they manage their supply chains from source to shelf, especially in terms of corporate social responsibility. Earlier in 2012, Swiss food company Nestlé announced its partnership with Washington, D.C., lobby Fair Labor Association to oversee operations in Côte d'Ivoire amid claims of child labor abuse among cocoa farm suppliers.