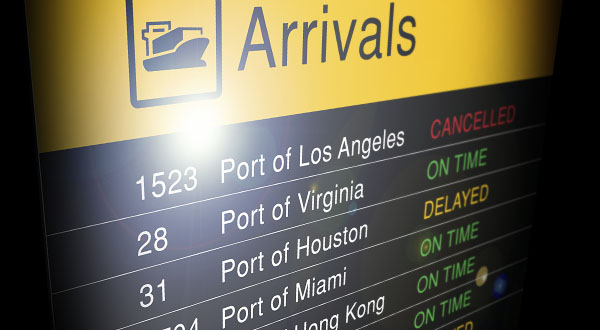 Awash with capacity and beset by rate fluctuations, the ocean container shipping industry reflects the global economy. Shippers are trying to find a measure of consistency as they navigate the peaks and troughs. While cost is often the common denominator linking shippers, carriers, intermediaries, and consignees, recent collaboration and research between ocean carrier-owned portal INTTRA and Danish consultant SeaIntel is exploring another metric to gauge performance: reliability.

Parsippany, N.J.-based INTTRA originates 18 percent of all global containerized trade, and has visibility to about 30 percent, according to CEO Ken Bloom. Trade lane analysis comparing vessel arrival reliability from SeaIntel's data with actual container delivery reliability provided by INTTRA has identified a significant gap between measurements.

"In the post-recession new normal, improved container reliability is important to shippers," says Bloom. "Vessel timeliness to a port is one thing, but container arrival at destination is another. Shippers asked us to show them what reliability looks like."

INTTRA's collaboration with SeaIntel is manifest in the publication of a shipping reliability report that combines on-time performance with schedule reliability information. The advantage for shippers is that they can better forecast reliability if they know how certain carriers, ports, and trade lanes around the world measure up in terms of delivery times to destination. This analysis presents a new way of thinking about the ocean container trade, says Bloom. Shippers get better reliability and pull out costs from the supply chain, while carriers deal with fewer exceptions.

"Carriers are dedicated to creating significant quarter-on-quarter—even month-to-month—improvements in container reliability," says Bloom. "We're not talking about transit time. In fact, carriers can improve reliability by providing a more reasonable estimated date that is likely to be right 95 percent of the time."

"Shippers say they need reliability to improve costs in a sustainable way—period," he says. "I don't think it relates to external issues."

Still, it's hard to fathom that recurring market volatility over the past few years hasn't had some impact on steamship line efforts to provide more reliable and efficient service. In some areas, carriers are now purposefully—in 2009 it was reactively—idling ships to bring ocean capacity more in line with demand and artificially stimulate rates. Vessel carrying arrangements have also become commonplace as carriers collaborate in certain lanes to fill ships and reduce costs. Others are tinkering with port calls and service strings to manage shifts in demand.

A Question of Inconsistency

Currently, vessel reliability has held consistent at about 81 percent across the board among steamship lines. Still, according to INTTRA and SeaIntel's research, a container is at a shipper's dock plus or minus one day only 64 percent of the time. This inconsistency might raise questions as to variables that delay transport from the vessel to the consignee's dock.

But that is missing the point, says Bloom. If product keeps arriving late, the best solution is to adjust the forecast, and therefore build more reliability into the move.

The INTTRA and SeaIntel report looks strictly at the success rate of delivering to the promised date at the right destination, plus or minus one day. A next iteration might include more end-to-end supply chain analysis.

The study is based on online survey responses from manufacturers, distributors, retailers, and multi-channel merchants with influence over various logistics functions at their companies. Research highlights include:

"While companies are finding value in using a single provider for multiple logistics services, the survey results suggest an opportunity for even deeper integration beyond traditional services such as warehousing and transportation," says Rob Pericht, senior vice president of operations at Saddle Creek Logistics Services. "Expanding the 3PL's role to include services such as packaging or order fulfillment can help companies increase speed to market, accommodate business fluctuations, and control costs."

Designed for shippers, third-party intermediaries, and couriers, the airline's service features wireless asset reporting devices that monitor the location, shock, light, temperature, pressure, and humidity of freight during transit; an online tracking portal; and e-mail alerts that inform shippers when their cargo crosses predefined checkpoints, arrives at its destination, or is delayed.

Shippers using Southwest's Cargo Companion prearrange the service for a specific flight. Asset-tracking devices are then sent overnight and packed with shipments. Regardless of where the freight is between origin and destination, in the air or on the ground, with Southwest or not, users can track its location and metrics, and initiate contingency plans in the event of an exception. After a move, the tracking devices are returned to Southwest for subsequent use.

Q: How did this idea originate?

Rogers: Customers asked, 'If we can ship by boat, truck, and rail with GPS-type wireless tracking, why isn't the same capability available on the most expensive and quickest transport mode?' The challenge for us has been patience—waiting for the right technology that is smart enough to know when to shut off the transmitting function so that a device would be safe and approved for airplanes.

The tracking technology is relatively new, and we had a few customers try it first. Those successes made us comfortable branding Cargo Companion as a Southwest product, and offering it to customers on a transactional basis so they don't have to make a significant upfront investment or enter into a service contract.

Q: How does Cargo Companion satisfy shippers' need for visibility?

Rogers: Shippers want a total solution. When exceptions happen—plane swaps, weight restrictions, snowstorms—shippers still need to know where their shipments are. If New York is hit with a huge snowstorm, for example, a shipper backed up with a day's worth of freight might face delays such as a ramp search, or the cargo might have moved on an earlier flight. Now a shipper can go to the Southwest Web site and find out a shipment's proximate location.

Q: What about security considerations?

Rogers: Prior to launching Cargo Companion, Southwest was pretty good at reporting to the shipper or consignee when freight was in our control. But, we know from experience that most theft occurs on the ground before or after we take custody of a shipment. What's different is that customers can use Cargo Companion when they are packaging a shipment. This way it tracks freight all the way to the final destination. It includes places where Southwest isn't touching the product, and extends the reach of the information we can provide customers.

Q: Do you expect Cargo Companion to eventually become a standard service for shippers with time- or temperature-sensitive products?

Rogers: We've seen this with other technologies in the past. Every rollout has early adopters, and those looking over the shoulders of early adopters. Then it becomes the next must-have item. Right now, about 50 percent of our customers are a fit for this product—shippers moving perishables, medical shipments, and mission-critical cargo. There is a reason why the other 50 percent are using air freight to begin with, so it may ultimately make sense for them to use Cargo Companion as well.

Q: Can shippers/consignees create alerts using Cargo Companion so they know when a shipment exceeds a pre-determined threshold, then take necessary action?

Rogers: Currently we're focusing on the device's security and location reporting elements, although shippers are able to monitor these other metrics. We can provide an alert, but we need procedures in place so we can react to an exception quickly if it occurs. It's not good enough to provide an alerting capability if we can't act on it.

The Longer End of the Short Line

As domestic shippers continue to test the efficacy of rail/intermodal solutions, smaller railroads play an important role in serving captive shipper needs, as well as feeding Class I carrier networks.

GWI has a reputation for growing through mergers and acquisitions, having integrated 65 railroads through 36 acquisitions since 1985. Following the incorporation of RailAmerica, its North American network will feature 108 railroads and 12,900 miles of track. The Greenwich, Conn.-based carrier also owns assets and track in Bolivia, Australia, the Netherlands, and Belgium.

Pending approval from the U.S. Surface Transportation Board, the acquisition will significantly increase GWI's customer and commodity diversification. In 2011, on a combined basis, no single customer represented more than three percent of revenues, and no single commodity group controlled more than 16 percent of freight revenues.

Rail America's largest segment is agricultural products and chemicals, while GWI ships coal and metals. The deal is expected to diversify the railroad's commodity base, offering protection against volatility in certain industries and making GWI less dependent on certain big customers.

In terms of geography, GWI's footprint expands from 24 to 37 U.S. states, while the United States overall will represent about 70 percent of GWI's revenue, followed by Australia (20 percent), Canada (10 percent) and Europe (less than one percent).

Bringing RailAmerica into the fold, the shortline expects to originate or terminate more than four percent of carload traffic in the United States, with volumes well-balanced across all Class I carriers.