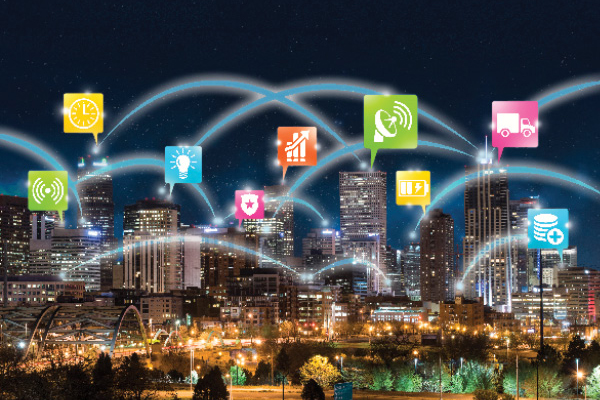 What Will Smart Cities Mean For the Supply Chain?

One decade ago, we were still getting used to the idea that our mobile phones were smarter than us. Today, thanks to an Internet of Things that links all our computerized devices, we have smart watches, smart toothbrushes, smart cars, smart factories, and countless other interconnected devices.

So it is no surprise that the U.S. Department of Transportation (USDOT) and Google's Sidewalk Labs have put forth a program to develop the world's first smart city, which will gather data to fuel solutions to myriad urban issues ranging from housing to pollution to traffic management. To help address transportation concerns, a smart city would have infrastructure and smart sensors in place ready to handle self-driving and connected vehicles, and integrate with Google Maps (and potentially other GPS programs) to monitor and direct traffic flows.

With Congress' continued failure to pass any kind of meaningful infrastructure funding, USDOT is seeking innovative ways to work around the problem. Transportation Secretary Anthony Foxx hopes that smart cities might relieve some of the burden on the nation's transportation budget. "Smart cities are not adequate against chronic under-investment," he said in a press call, "but what we're introducing is the possibility of technology innovation to solve some of our mobility challenges differently. This could be a way to flatten the curve of the infrastructure deficit a little bit."

Where will the smart city be located? USDOT has narrowed down the finalists to seven cities: Austin, Texas; Columbus, Ohio; Denver; Kansas City, Mo.; Pittsburgh; Portland, Ore.; and San Francisco. The finalists are currently developing proposals to introduce smart technologies into their cities, and the winner will receive $50 million toward implementing its plan.

A smart city environment would have a drastic impact on the supply chain. Driverless vehicles would open up a new world of transportation, logistics, and technology solutions, and the impact of the commercial driver shortage would likely be far less dire in these areas. Automated cars and trucks would also improve delivery efficiency and lower environmental impact, according to a DHL report.

Also, a smart city presents an optimal location to finally begin public urban use of commercial drones for delivery. This depends heavily on the Federal Aviation Administration releasing the long-awaited commercial drone regulations, which may not happen soon considering that the deadline for those regulations gets kicked down the road about as often as infrastructure funding bills do. Still, developing a connected city lays the groundwork for future drone use.

It's difficult to predict what benefits and technologies the first smart city will bring until the finalists release their individual plans. But whatever surprises are in store, there can be little doubt that the impact on the supply chain will be substantial.

Amid all the issues being debated and discussed in U.S. politics, the country's current $7.25 federal hourly minimum wage has been a hot topic. Many argue that minimum wage has failed to keep pace with inflation, and needs a substantial increase to restore working class America's buying power and economic stability.

The most common number suggested in recent months for a new federal minimum wage has been $15 per hour. In fact, some cities and states have already implemented these wages on their own. Such a large hike has many stakeholders across the supply chain concerned about how those increases would affect operational costs. For a warehouse employing 500 people, the annual cost of a wage increase amounts to $1 million annually for each dollar raised, according to a new report from real estate brokerage firm CBRE (see chart).

With e-commerce sales continually rising, and online retailers looking to open warehouses and distribution centers near metro areas to meet the fast delivery demands of consumers, companies that refuse to expand in these areas will have trouble remaining competitive. Yet, these metro areas are the same locations where support for a minimum wage increase is fiercest. 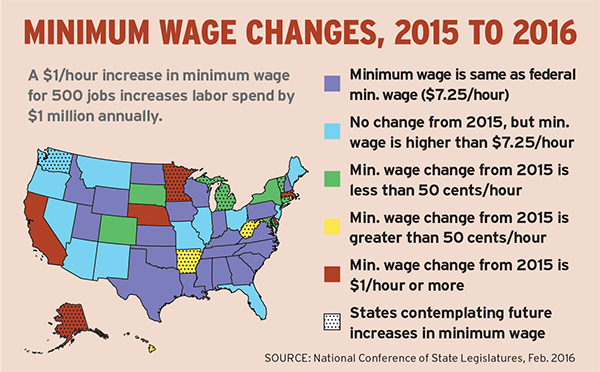 Proponents of a $15 per hour minimum wage argue that costs such as these will be offset because consumers will have more to spend, putting money back into retailers' pockets. The federal minimum wage has lost 8.1 percent of its purchasing power since 1968, and a minimum wage properly adjusted for inflation should rest at about $12 per hour, according to Pew Research. So, in theory, consumers who make more will eventually spend more.

However, labor accounts for 20 percent of supply chain costs, according to the CBRE report, so even if consumers do eventually spend enough to nullify increased labor expenses, companies must still be prepared for an initial impact that will negatively affect the bottom line.

Supply Chain Disruptors The Storm After The Calm

A quiet storm has been brewing beneath the relative calm that the transportation and logistics sector enjoyed in 2015, according to a report by professional services firm PwC. Customers' changing needs have made shipper supply chains more complex, revealing five key trends that are disrupting the status quo:

These trends are creating new demand patterns as shippers want logistics partners that can operate across diverse supply chains and distribution networks and that are strategically inclined—as comfortable in the C-suite as in a buyer's office, according to PwC. Shippers particularly seek carriers that can accommodate spikes in volume and maintain high performance levels during disruptions. And they are looking for business-enhancing opportunities, such as 3D printing and digitally enabled solutions, that provide visibility into multiple vendors, greater price transparency, and a consumer-like user experience.

In 2012, Google launched Google Fiber—a project to build a fiber optic communications infrastructure. Since then, the company has rapidly expanded the project across America, with many cities either currently or soon to be online (see list, right).

With Google Fiber's super-fast Internet connection of up to 1,000 megabits per second, a bigger pipe means less compression. "For the first time, I don't think about the pipe," says Google Fiber customer Marcelo Vergara of Propaganda 3, a developer of interactive software, games, websites, mobile apps, and supporting technologies, located in Kansas City.

Given the growing importance of e-commerce operations, supply chain Software-as-a-Service, and the impact of technology on transportation and logistics operations, having access to near light-speed web tone can drive efficiencies. When making your next site selection decision, it might be worth evaluating Google Fiber cities for your logistics, manufacturing, and service operations to continually drive supply chain speed.