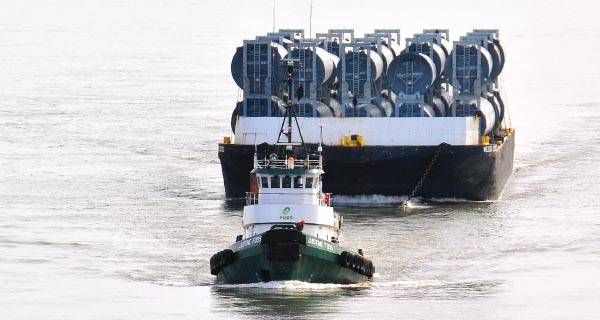 Custom-designed barges transported 10 sets of wind tower components at once.

As the search for alternative energy sources continues, wind power companies enjoy significant opportunities. But they also face substantial challenges, particularly when it comes to logistics. Moving 250-foot-tall wind turbines is no small feat, and requires considerable planning and expense.

The wind farm will occupy 4,600 acres in the Montezuma Hills Wind Resource Area, which consists of a small range of low-elevation hills on the Sacramento River Delta's northern banks. Once the wind farm is complete, PG&E will purchase the power it generates. The project is expected to provide clean electricity for approximately 35,000 homes, beginning in early 2012.

While the project is good news for enXco and, ultimately, for consumers, the logistics challenges were daunting. In early 2009, enXco contracted with St. Cloud, Minn.-based Anderson Trucking Service International (ATSI) to ship 100 complete wind turbines to the Pacific Northwest. The nacelles (engine housings) and hubs were brought in from Germany; blades were transported from Little Rock, Ark.; and the towers were shipped from Korea.

But when the project that was to be developed in the Pacific Northwest was cancelled, the very large and expensive parts sat in limbo at the Port of Vancouver, Wash.

enXco decided to move the equipment to northern California and use it for the Shiloh III project. While this was a great way to use components that were already in the United States, it also created a complex delivery issue: how to move all the pieces from Washington to California.

Taking Stock of the Options

enXco launched a feasibility study to evaluate the options and potential costs for moving 46 tower sets from Vancouver to Rio Vista by truck, rail, and barge. While trucking was the most obvious choice, the size of the wind turbine components presented a significant challenge.

Scheduling the required highway patrol escorts was also an issue. If moved by truck, each three-section tower—consisting of base, middle, and top pieces—would need an escort. The nacelles and blades would require additional trailers and escorts. Coordinating drivers, escorts, permits, and specialized equipment to move all the parts would be a monumental task.

"We considered all our options because moving oversized loads from state to state is complex," says Steve Jones, director of tech services and special projects for enXco. "The special trailers California mandates won't necessarily meet Washington's requirements. The more we looked at the details, the clearer it became that moving the towers by truck would be expensive and complicated."

Calling in the Experts

enXco contacted ATSI to determine how the carrier could help with the project. ATSI has considerable experience moving wind turbine components, including delivering them to the largest wind farm in Iowa. And enXco had worked with them previously on several projects.

"Moving wind energy equipment requires special considerations," says Joe Goering, vice president, ATSI. "Every state has multiple regulatory requirements, and turbines are continually increasing in size. We frequently compare transportation restrictions to the size of towers being built, and incorporate new trailer designs for these components. The trailers are so specific that they often will not have another use."

In the case of enXco and the Shiloh III wind project, proximity to the Pacific Ocean from Washington to California was the key. After further examination, enXco and ATSI determined barge transport would be the most efficient and economical mode.

"We contracted with ATSI to move 40 tower sets from the Port of Vancouver to the Port of Sacramento via barge, and to store them there," says Jones. "Then, when we were ready for them at the project site, ATSI would deliver them to Rio Vista by truck."

ATSI arranged to move the six additional tower sets by truck because it was not cost-effective to move less than a full load by barge.

Lining Up the Equipment

ATSI next reached out to Seattle-based marine transportation and logistics service provider Foss Maritime Company to develop a specialty barge that could accommodate the turbine equipment. Foss Maritime delivered barges capable of transporting 10 tower sets each. Because the towers were still contained in the original transport shipping frames used when ATSI imported them from Korea to Vancouver, they were able to be double-stacked on the barges.

The ability to move 10 towers at a time greatly reduced the number of trips necessary. "The transport required only four barges," says Goering.

The barges left Vancouver and traveled down the Pacific Coast to the Port of Sacramento. When the barges were discharged, the towers were placed into storage.

The Risk Pays Off

For both ATSI and enXco, barge transportation was a new experience that proved both successful and rewarding.

"This was our first North American oceangoing/intercoastal barge transport project," notes Goering. "We have shipped via barge up the Mississippi River in the past, but those projects required smaller barges. In this case, using smaller barges would not have been as economical."

The barges tripled the speed of transporting the components, and eliminated the bottleneck of having to schedule highway escorts.

"Opting for barge transportation allowed us to shave off about two-thirds of the transit time, and freed up escort resources for the other components," adds Jones. "If we had not decided to use barge transportation, we would never have met the delivery requirement."

From the Port of Sacramento, ATSI trucked the 40 wind tower sets approximately 50 miles to the Montezuma Hills Wind Resource Area in Solano County. A construction company then went to work erecting the towers and connecting the nacelles, hubs, and blades.

In addition to clean energy, the enXco project is also generating 200 construction jobs, and will result in $3 million in annual property taxes.

For enXco and ATSI, the ability to replicate this type of transportation for subsequent projects will depend on the location and circumstances. But given the right conditions, enXco would "definitely go this route again," says Jones.

The company may get the opportunity soon: enXco plans to start building another 100-megawatt project dubbed Shiloh IV next year.

"With this sort of volume, barges are the way to go, both economically and logistically," Jones notes. "We took a chance on a new alternative, and it paid off."