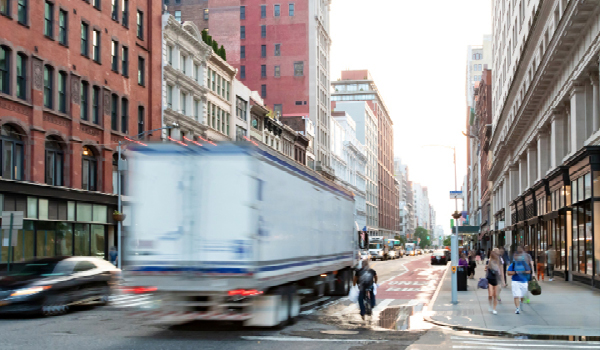 At some point, urban congestion will again be an issue. To get ready, cities and shippers are exploring options such as alternative vehicles, apps, pricing solutions, and a range of distribution centers.

If you're out and about in Vancouver, Canada, you may come across what looks like a combination of a bike, a trike, and a small trailer delivering orders from Spud, an online organic grocer. The vehicle, called the RadBurro, is an electric cargo trike from Rad Power Bikes, a Seattle-based provider of electric bicycles.

In denser areas and for routes of less than about 5 kilometers (3.2 miles), the RadBurro can be more efficient than traditional delivery vehicles. "They have the ability to bypass traffic," says Reza Bafandeh, Spud's vice president of supply chain.

The Spud logo, prominently displayed on the trailer, acts as one more marketing tool, highlighting both the company's name and its commitment to sustainable transportation.

While electric cargo trikes won't address every challenge facing logistics professionals moving goods in urban areas, they're an important tool. While the pandemic has eased some crowding temporarily, the growing demand for urban delivery has companies in some areas simultaneously tackling congestion, limited curb space, and vehicles' environmental impact. To do so effectively, many shippers need to assemble a mix of options.

The challenges inherent in urban logistics aren't new. "But they've been exacerbated by current trends," says Anne Goodchild, professor and founding director of the Supply Chain Transportation and Logistics Center at the University of Washington.

Chief among these challenges is the growth in online shopping, which jumped about 15% between 2018 and 2019, reports the U.S. Department of Commerce. Many consumer purchases are delivered during busy times of day, forcing delivery vehicles to take up precious road and curb space.

Sustainability has also become a priority in many urban areas, says Michael Rofman, leader of the New Jersey transportation and logistics practice with Mazars, a consulting firm. Amsterdam, Netherlands; Birmingham, England; Navi Mumbai in India; and San Diego in the United States are working with Zero Emissions Cities, a World Business Council for Sustainable Development program, to move toward zero emissions. These initiatives impact many traditional delivery processes.

Solving the challenges inherent in urban logistics requires working with multiple stakeholders to balance sometimes competing demands. And because no tool will fit every urban area, it will require trying multiple ideas.

Shared common lockers can become mini distribution centers where residents, workers, and visitors pick up delivery items, streamlining deliveries. When the Urban Freight Lab at the University of Washington installed a common carrier locker system in the Seattle Municipal Tower that was used for both UPS and U.S. Postal Service deliveries, the average time that delivery personnel spent in the tower dropped by more than 75%. The lab will continue experimenting with lockers to test different aspects, such as whether transit riders will use a similar program, Goodchild says.

Similarly, some retailers are shipping consumers' e-commerce deliveries to their own or others' stores, where customers can retrieve their packages, says Curt Bimschleger, managing director with Deloitte Consulting. In some cases, the deliveries await pickup inside a locker system.

Another possible solution is to spread deliveries throughout the day and night, allowing trucks to save time by navigating less crowded streets. However, this introduces other challenges: If a product arrives when most people are sleeping, how can it be stored securely until they retrieve it?

By matching items that need to be delivered with drivers already heading to that area, Roadie can help provide deliveries without exacerbating congestion. "Drivers get paid for what they're already doing, and there's not a new car on the road," says Roadie founder and chief executive officer Marc Gorlin.

Software can also help mitigate urban congestion. An app by San Francisco-based curbFlow matches commercial operator pickup and drop-off activity to available curb space in real time. In 2019, the company partnered with the Washington D.C. Department of Transportation for a three-month test when drivers from more than 900 companies used the app about 15,500 times. One result: Double parking dropped by nearly two-thirds.

Improvements in artificial intelligence are boosting the ability of tools, such as Google Maps, to bring delivery vehicles to the recipient's front door, and not just to the general vicinity of the destination. "That frees up space, because drivers spend less time walking to the delivery location," Rofman says.

Spud uses customized routing software to streamline its deliveries. The system considers multiple factors, including, for current customers, historic delivery times and whether the residence is a house or apartment. Then it maps the most efficient delivery routes.

The company also uses a proprietary solution that allows it to pack delivery totes and trucks as densely and efficiently as possible. For instance, while many online deliveries of one dozen items might require four boxes, Spud can use one or two. "It's customized order fulfillment based on product dimension, weight, and type," Bafandeh says.

The Price is Right

Another way to address congestion is by pricing for it. Among the cities that have explored this are Buenos Aires, London, Singapore, Vancouver, New York, and Seattle.

Among congestion pricing schemes are cordon pricing, or charging for crossing a boundary into a zone; additional charges for driving in the most crowded areas; and pricing based on vehicle class. No matter the method, cities can expect reductions in travel time, average greenhouse gas emissions, and the number of motor vehicle trips.

Maintaining stocked store shelves and meeting ever-tightening delivery times in urban areas typically require some sort of fulfillment or distribution center, either within or just outside a city's core central areas. "They can't just be in the suburbs," says Jean-Paul Rodrigue, Ph.D., professor in global studies and geography at Hofstra University. "Shippers have to be in central areas."

In some cases, these might take the form of microfulfillment centers (MFCs), or urban fulfillment centersthat are used as forward deployment nodes. "These will house the high-velocity SKUs that are the fast-moving items in both direct-to-consumer orders and in stores that require frequent replenishment," says Bimschleger.

Another option: Companies can sort and ship packages from warehouses located up to about 500 miles away, to a mixing center or package sorting facility located within an urban city. They can then hire delivery services to deliver the packages.

Electric cargo trikes and similar vehicles are another way to mitigate congestion. The RadBurro used by Spud holds up to 700 pounds and can travel about 40 to 80 miles on one charge. That's about one day's worth of deliveries. "We designed it for urban or last-mile delivery," adds Brian Rinckenberger, commercial sales director with Rad Power Bikes.

Regular e-bikes can also be effective for some deliveries. In August 2019, Domino's Pizza announced workers in 12 cities would use e-bikes from Rad Power to make deliveries. The shift improved both delivery times and service, according to Domino's.

While e-bikes and e-cargo trikes can play a role in reducing urban congestion, it's likely to be a niche one, Rodrigue says. Their cargo capacity is limited, and operators need to be in at least reasonable shape.

The range of solutions available to tackle the challenges of urban logistics reflects the varying needs of cities around the globe. "Like transportation in general, different solutions work for different people at different times," Goodchild says. "I see urban logistics as an ecosystem that needs a lot of options."

Once the COVID-19 pandemic eases, and streets are filled with people and traffic again, both cities and shippers will need to test a range of delivery options, review the results, and then develop a portfolio of the most effective tools.

Urban Logistics Around the Globe

When it comes to addressing the challenges of urban logistics, how do various parts of the world compare? Europe and Asia tend to lead, as cities in these regions are often more densely populated than even the largest cities in North America. For instance, Mumbai, India, is home to about 73,000 residents per square mile. New York City, in contrast, has about 27,000 people per square mile.

One city that's successfully experimented with multiple tactics to reduce congestion is Amsterdam in the Netherlands. During a three-year period ending in late 2018, the number of daily motorists on the roads during peak times dropped by 14,000.

The city and employers took various steps, including streamlining bicycle connections around the area; introducing intelligent transport systems, such as smart traffic lights, to improve traffic flow; and creating a mobility platform that provides updated travel information to people heading to events. Additionally, many employers offer flexible work hours as well as company bikes and e-bikes.

The United States also offers multiple options, such as delivery times that range from one hour to several days, and various ride-sharing apps. Where the country tends to fall short is in the management of those services. This is not an accident. "It's hard to have space for companies to innovate and change when you have a highly organized, regulated system," says Anne Goodchild with the University of Washington.

The key is to respect both innovation and management of those innovations. "Look for solutions that allow good and mitigate the bad," Goodchild adds.