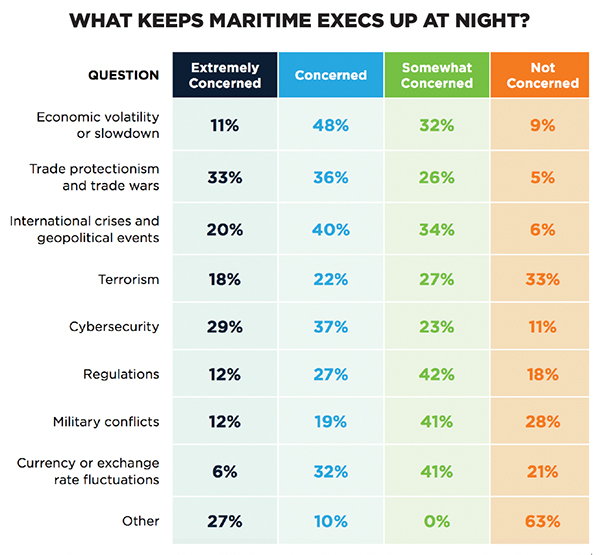 Industry executives and professionals are uneasy about the recent escalation of international trade tensions and increasing tariffs. Concerns about trade protectionism top the list of industry worries, but only 11 percent of survey respondents say they are extremely concerned about an economic slowdown.

The global maritime industry is cautiously optimistic about the global business environment for world trade, but also concerned about the potential impact of trade tensions, cyber security, fuel costs, and other headwinds to industry recovery. Those are the findings of a new benchmark survey developed by the Business Performance Innovation Network, in partnership with Navis.

Some 82 percent of survey participants anticipate either improved profitability over the next 12 months, or continued stabilization and reduced losses, according to the Navis Business Bellwether report. Growth is expected to come from all regions of the world, with particularly robust activity in Asia and the Middle East/Africa.

While just 12 percent of respondents are "very optimistic" about the global business environment, another 46 percent express cautious optimism. Some 41 percent say they are either somewhat or very concerned.

Topping the list of industry concerns is the rise in trade protectionism and new tariffs (see chart). One-third of all survey respondents say they are extremely concerned about trade tensions, with another 36 percent saying they are concerned. Cyber security also ranks high on the list, with 29 percent indicating extreme concern and another 37 percent expressing concern.

Only 11 percent of respondents are extremely concerned about an economic slowdown. However, when assessing potential risks to the industry, economic growth ranks high and just below trade protectionism. Other top risks include rising fuel costs, a lack of process efficiency, continued industry consolidation, and labor disruption.

Technology investments will increase over the next 12 months, according to the survey. Some 90 percent of respondents say their organizations would raise technology spending, including 56 percent who say the increase would be 6 percent or greater. Respondents also cite adopting new technologies as one of the top three priorities for improving performance, behind only improving process efficiency and quality, and boosting customer service and satisfaction.

The top areas for increased technology spending, in descending order, include automation, business intelligence, planning and management systems, big data analytics, and SaaS applications and cloud services. Much discussed technologies, including blockchain and the Internet of Things, fall significantly lower on the priority list.

At an industry level, respondents point to the need for improved collaboration and operational planning across the supply chain as the most important priority, followed by supply chain visibility. Most see the industry's capacity to share data as needing dramatic improvement. Respondents are virtually unanimous about the need to standardize data interfaces to improve data sharing and collaboration.