The Search for a Connected Supply Chain 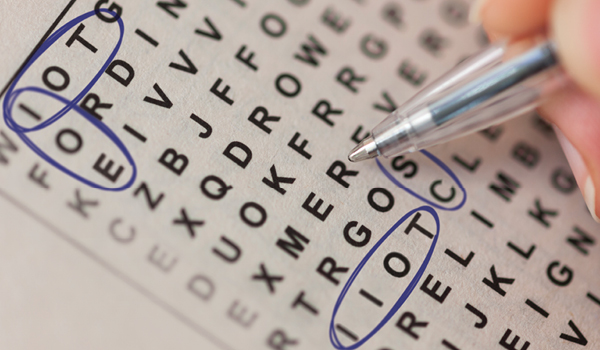 How to find value behind the acronyms

Many think of this as the Internet of Things (IoT). But, "It is not connecting everyday objects like toasters and refrigerators to the internet," writes Kevin Ashton, the man credited with coining the phrase, in Making Sense of IoT: How the Internet of Things Became Humanity's Nervous System. "Activating a toaster from the internet has little value: You still have to walk over and put in the bread."

Instead, Ashton says, IoT is "sensors connected to the internet, behaving in an internet-like way by making open, ad hoc connections, sharing data freely, and allowing unexpected applications, so computers can understand the world around them and become humanity's nervous system."

A more simple definition comes from Pete DeNagy, president of Texas-based Internet of Things America, a company that brings IoT solutions to rural areas. "IoT is the ability to connect a device such as a cell phone, wire sensor, airplane, or car to another end point device—another phone or a data center," he says. "It's not mystical, and it has been around for 30 or 40 years."

What we refer to as IoT today is the same thing as yesterday's internet of everything (IoE), says Atul Mahamuni, vice president of IoT applications at software company Oracle in Northern California. Mahamuni, who worked at Cisco when that company originated the phrase, says that IoE was defined then as having four pillars:

1. People. For example, employees monitoring machinery or consumers wearing an activity tracker like a Fitbit.

2. Data. Devices typically gather data and stream it over the internet to a central source, where it is analyzed and processed.

3. Things. Physical items such as sensors and consumer devices that are connected to the internet and each other.

In earlier years, IoT was often seen as machine-to-machine communication. That has changed, however. "What was IoE is now IoT," Mahamuni says. "The term IoE is obsolete."

Today, IoT is widespread in the supply chain. Eighty-five percent of businesses responding to a 2017 Aruba survey said they plan to implement IoT by 2019.

While now most entrenched in transportation and logistics to track, monitor, and locate goods, IoT is deployed in supply chain applications that range from monitoring livestock health and fertility to eliminating unnecessary trips to postal boxes in rural locations by using smart devices to communicate whether there's any outgoing mail to pick up.

Produce is a category that's ripe for IoT. While the technology has been used to monitor irrigation, fertilizer, and weeds for some time, it hasn't been used post-harvest until recently. Today, IoT allows growers, carriers, and retailers to better track produce shelf life from the moment it's picked.

For example, Zest Labs provides technology that helps reduce up to 40 percent of food waste annually at the retail and consumer level.

"Many variables in agriculture—the temperature in the field when produce is picked, how long and in what temperature pallets sit while they're being loaded—have an impact on shelf life," says Kevin Payne, Zest Lab's vice president of marketing.

The California company's process for managing shelf life starts with analyzing the crop's "freshness capacity" in the field, then uses sensors in the pallets to monitor product temperature from field to store. Its data analytics help retailers put goods that will expire sooner on store shelves first while holding back those that will last longer—or sending them to a farther destination.

ShelfAware makes packages of components intelligent by applying RFID tags. This turns them into inventory network "nodes" that are tied to database records. As workers pull a package, they scan it at an RFID-enabled station connected to the database. "We know exactly what our customers consume and when," says Johnson.

His company no longer has to be on site to determine stock levels, and customers don't have to tie up capital in excess inventory.

"Factories that can't get parts on time from suppliers have to shut down. They need greater confidence that they can get those parts," says Gelston Howell, senior vice president at California-based 42Q. "This system provides that."

IoT is not all rewards without risks, though. Advisors at insurance company Travelers warn clients about workplace safety, cyber sabotage, and property damage.

"When equipment is connected to a bigger network, a person with bad intentions who gains access could change the equipment to override tolerances and tamper with sensing mechanisms," says Erika Melander, manufacturing industry lead at Travelers.

In addition to managing those risks, experts advise companies exploring IoT to start at the right place.

"Focus on a business problem or opportunity—that's where you can leverage IoT," says Chuck Hieronymi, director of business solutions at Railinc Corporation, the Association of American Railroads subsidiary that provides data, analytics, and messaging services for the rail and transportation markets. "Companies enter a danger zone when they implement IoT for the sake of implementing it. Start with your business priorities."

Don't use a pilot project approach. "Start with small installations that can scale instead," advises DeNagy. "Drive the return on investment, then expand the project. If you don't get the ROI you need, try another project."

"Identify a situation where there's a problem because you don't have data you want," adds Dan Jamieson, general manager of San Francisco's Particle, an Internet of Things platform. "You want to collect data so you can make better decisions in real time."

The supply chain of the future that leverages IoT properly will be one where less capital is tied up in goods because companies will be better able to manage fluctuation and demand.

"The better the information we have about the demand, the better able we are to pull capital out of the supply chain and redeploy it into higher leveraged areas such as research and development or marketing," Jamieson says.

Hieronymi envisions a better-connected supply chain. "There will be more collaboration, integration, and intelligent devices capturing data that has never been gathered before," he says.

While Banafa is enthusiastic about a future he predicts will see businesses using the Internet of Things as a service, he cautions organizations to build customer trust. "The three necessary pillars for customer trust are security, safety, and privacy," he says. "Without them, there's a problem."

That applies to the trash can turning on the TV, too.

Here are some common tech-related acronyms you'll hear in meetings and throughout the distribution center.

IoE: Internet of Everything

To check how many spindles were operating on an industrial thread and yarn spinning machine at one time, Service Thread relied on manual inspections that were time-consuming and not always accurate.

When the leading American manufacturer of commercial thread and yarn decided to automate that in-person inspection of 3,300 spindles spread across 115,000 square feet of floor space, it knew that the right combination of technology and hardware could make it possible.

Enter the Internet of Things.

IoT helped the company automate the information-gathering process in a way that saved time, labor, and money.

Related Articles
Trends—August 2015The Shape of ‘Things’ to ComeTurn to Technology to Attract the Next Generation of WorkersHow to Find Value in Big DataWinter Reading Guide 2017Joanne Wright: Turning Data Into InsightLeading by Example and EmpowermentSelf-Improving Supply Chains Have ArrivedBig Data: Breaking Down Key Information and Putting It to WorkEnterprise Technology Freight Train Finally Reaches Logistics Sector More related articles...