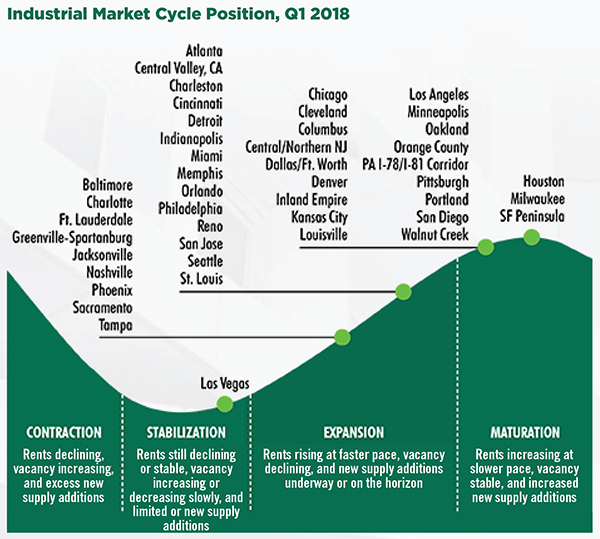 The current expansion phase for U.S. industrial and logistics real estate appears poised to surpass the typical lifespan of an economic cycle due to demand from e-commerce companies, according to a new report from CBRE.

U.S. economic cycles tend to run for seven to eight years. Yet the current expansionary cycle, which started in 2009, already is among the longest on record for the American economy. CBRE's report highlights two factors that likely will fuel the U.S. industrial market even longer.

Second, the rapid growth of e-commerce in recent years has created a permanent, structural shift in the market as an increasing portion of U.S. consumer goods is distributed to consumers through warehouses rather than stores. Given that e-commerce still has substantial room to grow within American retail sales, that ongoing shift likely will continue to support the industrial and logistics market's expansion.

"There are few historical precedents for e-commerce's effect on the industrial real estate market," says David Egan, CBRE global head of industrial and logistics research. "The market still is establishing its new baseline, though most evidence indicates that expectations have reset at higher levels for the foreseeable future."

Because of these factors, it's feasible that markets that are further along in the current industrial and logistics cycle than most—such as Houston, Milwaukee, Chicago, and Los Angeles—can continue to generate gains, according to the report.

Meanwhile, markets still in an expansion phase, such as Atlanta, Philadelphia, Phoenix, and Orlando, likely still have time to continue on their trajectory.