The Evolution of Third-Party Logistics 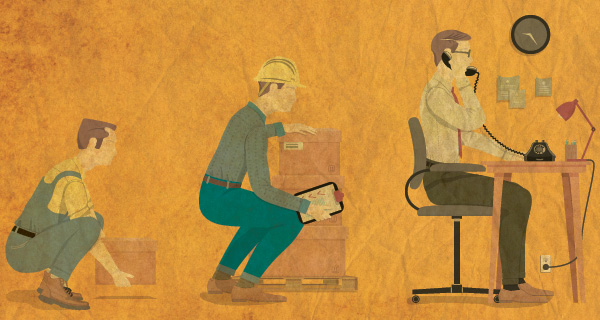 How past challenges create tomorrow's solutions.

When we look back at the history of logistics, not much changed over the eons. For hundreds of years, we moved boxes, put products on ships, and traveled all over the world. In the past 20 years, however, the management of transportation and logistics has undergone meteoric change. Today's supply chain is awash with complexity. Whether it's the rapid growth of e-commerce and omni-channel logistics, or emerging consumer markets around the world, shippers face a litany of challenges. As a matter of course, they often partner with third-party logistics (3PL) providers to seek counsel and reduce costs.

Yet it seems like only yesterday when 3PL was just a new acronym bandied about industry conferences and trade magazines to describe a different kind of transportation and warehousing company.

As a point of reference, consider the world of 1996. Mad Cow disease spread throughout Britain and Europe; Japan unveiled the first DVD; AOL was the social medium of choice; Microsoft introduced the Windows NT 4.0 operating system and Internet Explorer 3 Web browser; Amazon.com let readers search for books by author, subject, or title; and the Regina Maersk debuted as the world's largest containership with a capacity of 7,100 TEUs.

Today, Internet Explorer is being phased out with the introduction of Windows 10—10 versions removed from NT 4.0 . Amazon is playing with drones, and containerships tip the scales at 20,000 TEUs. A lot has changed in 20 years. As global economies have turned and burned, the 3PL sector has evolved accordingly.

Many names have changed. GATX, Fritz Companies, TLC, USCO, BAX Global, and Caliber have long since disappeared. In 1996, it was Federal Express, not FedEx; Caterpillar Logistics had yet to morph into Neovia.

But a handful of service providers have stood the test of time. Inbound Logistics recently caught up with five 3PL providers that featured on our inaugural list in 1996, and have been on the list each year up to the present. We asked them to consider how outsourcing demand has changed over the past 20 years, and to shed some light on where the future of 3PLs is tracking.

"Our internal departments were siloed. Transportation and warehousing people didn't talk to one another—which was typical in the industry as so little was integrated," Drake recalls.

"It was a test market," says Bob Bianco, president of San Francisco-based Menlo Logistics. "Shippers liked the 3PL concept, but they were piloting projects to see if they could achieve real value. These projects covered singular functions, or were regional in scope."

Shippers dictated terms accordingly. "We were order-takers," Drake says. "We saluted and did whatever customers told us to do."

Things started to change, however, when savvy shippers began tasking 3PL partners with additional responsibilities. For Des Moines, Iowa-based Ruan Transportation Management Systems, it was a natural progression from its dedicated fleet pedigree.

"We started doing some logistics, brokerage, and warehousing as customers asked," explains Marty Wadle, senior vice president of supply chain solutions for Ruan. "We grew up doing little pieces of 3PL work using our legacy systems—trying to jam logistics processes through trucking dispatch systems that weren't built for that."

Eventually, Ruan began investing in technology and recruiting the right people so it could proactively go after that market share rather than pick off new business through its dedicated fleet operation.

"Twenty years ago, shippers just wanted us to move their freight," he adds. "Now they want to know what's going on with their freight, and how we can move it more efficiently and economically the next time."

Automotive, in particular, was a core industry for Ryder. Fiat Chrysler Automobiles (FCA) North America started working with the 3PL in the early 1990s. At the time, its outsourcing strategy was simple.

Ryder was among several 3PLs that served Chrysler in this capacity. The automotive company relied on its LLPs to gather data from suppliers and carriers, and dynamically manage routes—pick up times and deliveries—in and out of its plants.

But then Ryder started to change its go-to-market approach. "We focused more attention on our logistics and supply chain portfolio, as well as fleet management," says Sensing. "We exited the one-way truck rental business. Because most people tied our brand to the iconic yellow truck, that move was a big step in our transition."

By 2000, Ryder's role with Chrysler grew into that of a 4PL—overseeing the automotive company's North American plants by performing logistics engineering, modeling, and network design. For the better part of the past decade, Ryder has provided strategic oversight. With a few recent exceptions, Ryder doesn't run any physical part of Chrysler's operation to prevent any conflicts of interest.

As logistics outsourcing has matured, opportunities to further optimize logistics operations surface. The 3PL has become an important node in this transformation—not just in terms of meeting functional needs, but also as a repository of industry best practices and knowledge sharing.

When Drake became CEO of Dry Storage Company in 1994, she recognized the need to consolidate the 3PL's business model in a literal sense. Because the public warehouse comprised 22 smaller entities, she wanted to move toward a standard way of doing things—where the company could coalesce best practices across customers and geographies. That's when it pulled everything together under the DSC Logistics banner.

Changing with the Times

Ryder and DSC Logistics' stories are not uncommon among legacy 3PLs. In fact, many have similarly transformed over the past two decades. The 3PL's value proposition has morphed from exclusively cost reduction to also include change management.

There has been no shortage of drivers: the peak of the dot.com bubble and rapid deployment of technology; the Sept. 11, 2001 terrorist attacks; the rise of China's manufacturing economy and widespread offshoring; the Great Recession in 2008; and cloud computing, among others.

These external pressures have forced companies to seek counsel beyond the enterprise. 3PLs, by virtue of their myriad customers and experiences, crowd-source invaluable information and insight. Dovetailing functional capabilities with knowledge creates a powerful elixir for prospective outsourcers.

"Today, we sit at the strategy table with our customers," adds Drake. "Consultants used to tell companies what to do; that responsibility for thinking and doing has shifted to the 3PL."

She points to a current situation where DSC Logistics is working with three customers that are in the process of making acquisitions. In two of the cases, the 3PL is working with both buyer and seller. "We've been helping them figure out how the new network should look," Drake adds.

Buffalo, N.Y.-based New Era Cap Company is familiar with this type of 3PL counsel. In 2005, it operated a lone warehouse in Mobile, Ala. Business outpaced distribution capacity. The company had never worked with a 3PL before, but there was a burning platform to test outsourcing.

"We talked to several players at the time," explains Jim Patterson, chief operating officer for New Era. "Menlo Logistics had space available, and was ready to jump in and solve an immediate need for us. It was an opportunity to work quickly with a 3PL, and learn along the way."

Menlo had space available in Kansas City, which was a good fit for where New Era needed to fulfill customer demand. It was an 80,000 seasonal unit program; a short-term solution powered by an offline spreadsheet the two companies shared.

New Era continued to operate the Mobile DC. After a successful two years with Menlo, the company revisited its outsourcing and distribution strategies.

"In 2007, we looked at some analysis that Menlo provided regarding where our accounts were located and where we were shipping from," says Patterson. "Menlo suggested we'd be better able to service our accounts by moving to Harrisburg, Pa."

So New Era relocated to a Menlo DC in Harrisburg, all the while maintaining the Mobile facility. But the company started shifting some accounts to the new warehouse. Two years later, it closed the Mobile operation entirely and moved everything to the Menlo-managed model.

"The partnership has been a journey," Patterson says. "If you look back, it seems like we've operated on a 24-month cycle—every two years we make a big leap forward.

"Early on we had product that needed to move, and we were constrained by capacity," he adds. "Now the partnership is much more strategic. That's the direction we're going."

3PLs have been leading manufacturers and retailers in new directions as well. As China's economy exploded in the 2000s, and U.S. companies began looking offshore for cheaper labor, they needed help making inroads into new sourcing markets where they had no infrastructure or connections.

"We became more of an integrated company by looking at our international operations," says Sensing. "We focused on where our customers had needs in North America, Europe, Latin America, and Southeast Asia. That allowed us to grow where customers needed our help, and where we could provide solutions in terms of a global footprint."

Few 3PLs have the global footprint that UPS has developed over the past two decades. "In the early 1990s, UPS acquired a broad range of supply chain capabilities globally," says Alan Amling, vice president of global logistics and distribution, UPS.

Even in 1992, UPS was reaching more than 200 countries and territories with its parcel and package services. When it formed a logistics group one year later, it had a solid foundation to deliver global supply chain management solutions.

"Serving international markets introduces a higher level of complexity to the supply chain," says Amling. "As companies expand to penetrate new markets or pursue improved manufacturing models, they need the logistics expertise, services, and solutions that 3PLs can provide."

In 2010, the company was looking to open a European DC to serve its growing market there. Menlo operated a facility in Eersel, Netherlands. So New Era opted to go with the 3PL. "We were able to move down the path quicker because of our experiences in the United States," says Patterson.

New Era's positive experience outsourcing distribution and logistics with Menlo also influenced its decision to rely on other local 3PLs to serve unique global markets such as Japan and Korea.

Given the rapidity of change over the past 20 years, it's difficult to even conjure what the supply chain—let alone the 3PL sector—might look like in the near future.

Consider Menlo's trajectory as an example. "When we first started the company, we were a transportation management 3PL," recalls Bianco. "Our first project in 1992 was helping Hewlett Packard with LTL distribution. Then we got into the warehousing business. Today, Menlo provides a full array of logistics services—anything from the supplier to the end user. We even do some manufacturing."

That's not an uncommon narrative. 3PLs continue to diversify their services.

"The 3PL sector will likely become more specialized," predicts Amling. "3PLs will focus more on industry segments and sub-segments, for example focusing not just on the healthcare supply chain, but the medical device supply chain within healthcare."

Such specialization raises the profile of 4PL-type models. Also, as global markets continue to open up, there will likely be more competition from service providers in other parts of the world.

An interesting dynamic is building. The industry continues to expand, then contract. Technology and human talent have become competitive differentiators. Non-asset service providers and transportation brokers are flooding the market. But consolidation has been rampant over the past few years. Given capacity constraints, asset-based providers have become more valuable. The cycle continues.

Drake predicts continuous integration is the likely scenario over the next few years. "We know that's the megatrend in technology. We see people working in both directions and both sides of the aisle," she says. "And that's OK. Silos create costs. It's fine for lines to blur."

"Blur" is an apt word to describe the continuing evolution of 3PLs and 3PL partnerships.

These 3PLs were featured on Inbound Logistics' inaugural Top 50 3PL list in 1996 and our most recent iteration in 2015: