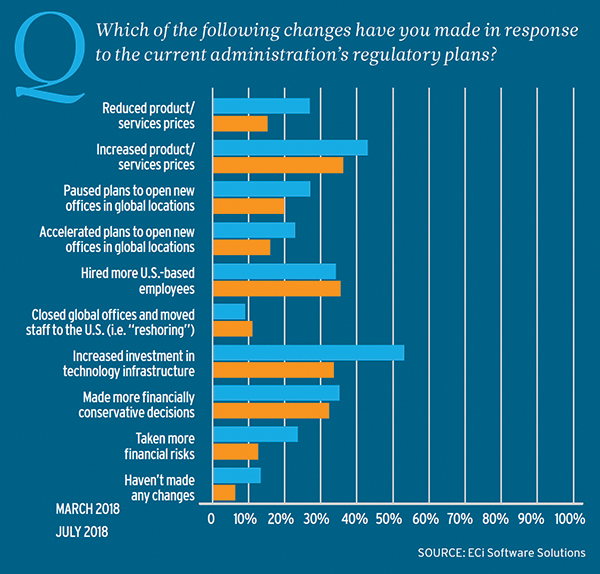 The impact of powerful forces such as digital transformation, Industry 4.0, the current regulatory climate, and automation on U.S. manufacturers is the focus of a new research report from ECi Software Solutions. The findings indicate the role technology is playing in the U.S. manufacturing resurgence, with 89 percent of respondents confirming they had increased technology investments in the past 18 months.

Manufacturers turn to ERP to manage tariffs: 67 percent of respondents confirm that Enterprise Resource Planning (ERP) is either very effective or effective in managing the impact of tariffs, particularly by providing supply chain visibility, resource planning, and job costing.

AI is more than just a buzzword: More than half of 2018 respondents indicate that they're currently using some form of artificial intelligence (AI) in their operations; of those who don't use AI, 56 percent plan to in the future.

Automation is a job augmenter, rather than a job cutter: 73 percent of respondents indicate that their core business processes are automated by software and are reaping the benefits—most notably by reducing errors and improving accuracy, employee job satisfaction, and productivity.

Cybersecurity concerns prevent technology adoption: Half of manufacturers say they are concerned with the cybersecurity risks associated with adopting a new technology; they also list cybercrime as a top external force contributing to changes in manufacturers' business models or operations in the past 12 to 18 months.

Related Articles
Chainsaw Maker Massacres Supply Chain InefficienciesWhiskey, Bartender—and Make it Quick!Tapping the Power of Performance ManagementTrends—January 2016What Effect Will 3D Printing Have on Logistics and SCM?Turn to Technology to Attract the Next Generation of WorkersTransparency to Efficiency: How IoT Can Increase the Productivity of Your Transportation (Sponsored)Carrier Network Plants Seeds of Delivery EfficiencyMost Mid-Market Supply Chains Are Under-ServedMastering Logistics Complexity: How to Take Control With Technology More related articles...