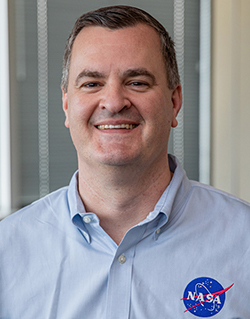 Mark Wiese works at the NASA Kennedy Space Center in Florida as manager of the deep space logistics Gateway program.

When people think of NASA, they usually think of rocket science. But logistics is also key.

Since 2000, my group has been supporting the space station with resupply ships that bring food, water, science experiments, space suits, and everything else the crew needs to complete their mission on the moon's surface.

NASA is always challenged to do more with less. We want to leverage what commercial logistics companies are doing to move goods across the globe, so we can understand how we can do our jobs more efficiently. We're also focused on building a commercial supply chain in deep space.

To do this, we've set up a 15-year contract with a $7 billion cap to ramp up new companies and buy logistics resupply capabilities as commercial services. In March 2020, SpaceX was announced as our first commercial provider under this contract. This emphasis on commercial collaboration drives down costs at NASA and enables private industry to spin off products to other commercial customers, fueling the cycle of innovation and lower-cost delivery.

We've been successfully working this commercial service approach for the past 20 years. We started by buying rockets for un-crewed scientific missions, such as weather satellites. Now we are moving beyond that to the moon. Artemis is NASA's campaign for our next mission of returning to the moon by 2024 with the first woman and the next man in the Orion, a crewed spaceship.

The crew flies separately from the cargo module and has enough supplies to get there and home. The cargo module provides the water, food, clothes, science experiments, space suits, and tools that the crew needs while they're on the surface of the moon. The module docks at the Gateway, a command and service module in orbit around the moon.

The Gateway also represents our first step in developing a deep space transportation ability. Mars is about nine months away. We have to have a command and service module to which we can dock our crew and bring them supplies during that journey. The Gateway is like a supplies warehouse.

Since the 1960s, we've sent only a handful of missions to the moon because it's expensive. Fifty years later, technology has advanced to the point where we can go there more sustainably, with advances in the miniaturization of electronics and 3D printing. We can reuse a lot of the hardware. All this enables us to send missions in a more sustainable and affordable way.

We'd like to have this as an annual mission. This will also require developing advanced robotics, advanced automation, and artificial intelligence to support the crew's mission and limit the time they have to spend moving stuff.

Eventually, we can take what NASA has been working on during the past 50 years and change the way we transport things around the globe. Rockets are getting so cheap that eventually, we'll be moving cargo by rocket across the globe.

As a kid, I loved watching Top Gun and seeing the fighter jets and cutting-edge technology. Aerospace engineering was the closest connection to that Top Gun inspiration.

I took a class at Kennedy Space Center working on small satellite design, and that opened the door to go to Houston and work in mission control and build the space station. That led to working on contract management and leading the supply chain efforts for trips to the moon.

The past 20 years of work have gone by in a blink. It all feels like a dream come true.

1. What book made a significant impression on you?

The book This New Ocean: The Story of the First Space Age dates back to World War II, when the United States found a stash of V-2 rockets hidden in a cave in Germany. It moves to the birth of the Air Force and the evolution of NASA. It was awesome to read all that history.

2. Are there any adages that you live by?

3. If you could speed the development of a supply chain-disrupting technology, what would top your list?

Diversity of thought and different perspectives are what drive disruption. At NASA, through a couple of accidents in the space shuttle program when we got so laser-focused on how to do things, we learned we often forget to step back and revisit the big picture.

There are lots of ways to approach solutions. We've learned our lesson.