Switching On The Smart Grid 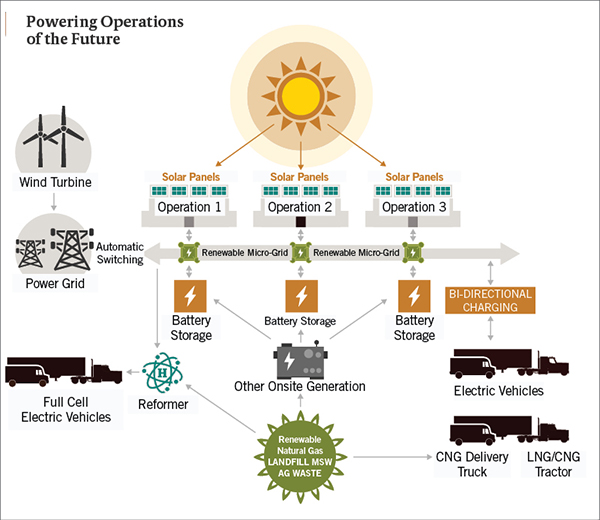 A radical new charging technology that overcomes the challenge of simultaneously recharging an entire fleet of electric vehicles (EVs) without the need for an expensive upgrade to the power supply grid has been deployed in London by a UPS-led consortium.

The breakthrough signals the beginning of the end of a reliance on traditional combustion engine powered vehicles by allowing UPS to increase the number of EVs operating from its central London site from the current limit of 65 to all 170 trucks based there. This major advance—believed to be the first time these systems have been deployed at this scale anywhere in the world—is the result of the Smart Electric Urban Logistics (SEUL) project with UK Power Networks and Cross River Partnership, with funding secured from the UK's Office for Low Emission Vehicles.

As a result of this initiative, combined with the advances the company recently announced to reduce the cost of electric vehicles, UPS believes the day is rapidly drawing closer when the acquisition costs to put an electric vehicle on the road, including those associated with getting power to the vehicle, will be lower than the equivalent costs of its diesel counterpart. This development will be instrumental in enabling electric vehicles to be deployed at scale in the world's cities, which is an essential component of tackling air quality challenges in these urban environments.

A key part of this initiative is the use of on-site energy storage batteries. Although new batteries have been deployed at this stage, it is envisioned that, in the future, these could be second-life batteries that have already been used in a UPS EV. Together with the smart-grid, this will pave the way for a UPS EV infrastructure strategy that can dynamically use a conventional power upgrade, smart grid, on-site storage, and in many cases, local power generation including solar and other alternative sources.

Related Articles
How to Meet Global Shipment Compliance ChallengesBlockchain Supply Chain?Who Are You Doing Business With?Global Trade Management Systems: You’ve Got the Whole World in Your HandsSpring Clean Your Trade and Compliance ProcessesTurn to Technology to Attract the Next Generation of WorkersTransparency to Efficiency: How IoT Can Increase the Productivity of Your Transportation (Sponsored)Carrier Network Plants Seeds of Delivery EfficiencyIncoterms: Playing by the RulesMost Mid-Market Supply Chains Are Under-Served More related articles...