Supply Chains that Rock Around the Clock: Rock and Roll All Night 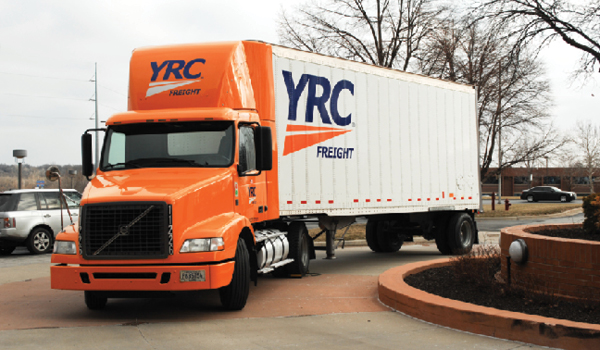 To help drivers rock around the clock, YRC trucks are equipped with advanced safety technologies, such as collision mitigation, active braking, and lane departure warning.

Meet the Kings of the Road—a two-person sleeper team hauling a two-trailer set filled with LTL freight from Chicago to Denver.

The sun has yet to show its face, but at YRC Freight's distribution center in Chicago Heights, Ill., workers in the freight yard and on the loading docks have been busy for hours. For some of them, the task at hand is to fill two 28-foot trailers with LTL freight, preparing a two-trailer set for a trip to Denver.

The loads going onto those trailers arrived during the night from YRC facilities in Columbus, Ohio; Grand Rapids, Mich.; Milwaukee, and other midwestern cities. They include all kinds of commodities shipped by retailers, wholesale distributors, manufacturers, and government agencies. Many of those products came packed onto skids, but workers are also loading single cartons and bulk commodities packed in barrels.

With years of experience to guide them, the dock workers make the most of the space in each trailer, fitting in as much freight as possible while keeping each load safe, and not exceeding legal weight restrictions. They have plenty of tools to help them assemble this puzzle. As they load a trailer, they slide decking bars into grooves in the walls to make a racking system, so they can stack one load above another without direct contact. They also inflate dunnage air bags and position them between loads, to keep goods from shifting from side to side.

Once the dock professionals finish loading the trailers, two drivers—we'll call them Jim and Brian—report to the Denver-bound equipment to get ready for their trip. Although YRC employs women drivers, and some husband-and-wife and father-and daughter teams, most of its drivers are men. As a sleeper team, they'll be able to make the trip to Denver in one shot, keeping the wheels rolling almost continuously.

Each driver double-checks his wallet to make sure he has his commercial driver's license. The team also looks over the manifest for the load. Finding that one of the shipments on the rear trailer contains a poisonous liquid, Jim affixes the correct hazardous material placard to the outside of that box. Finally, the drivers do a pre-trip safety inspection, making sure the tires are properly inflated, the lights all work, and the truck is otherwise ready to hit the road.

Jim and Brian also stow toiletries, extra clothes, and other personal belongings in the sleeper bunk's storage compartments. Located behind the driver and passenger seats, the bunk doesn't boast any frills. But it's clean and comfortable, equipped with a mattress. YRC provides a linen allowance that drivers use to purchase their own bedding.

Jim is the day shift driver on this team, so he climbs into the driver's seat. He makes a notation in an Hours-of-Service (HOS) logbook to indicate the time he is starting to drive. Brian, the night shift driver, will make a similar notation when he takes over the wheel. U.S. Department of Transportation regulations require all drivers to keep these logs. Some trucking companies today use electronic systems to record HOS, and pending legislation may soon require e-logs in all trucks. But currently, YRC uses paper logs.

Once the two trailers are hooked up and ready to move, Brian climbs into the bunk to get some sleep. Jim steers the truck out of the distribution center and makes his way along local roads to the interstate. The tractor he's driving comes with a host of advanced safety technologies, such as collision mitigation, active braking, lane departure warning, and blind spot detection. The cab is also equipped with a satellite radio system.

One thing the tractor doesn't have is a satellite-based communications and tracking system. Because LTL linehaul trucks drive the same routes over and over, with well-established drive times between any two points, YRC doesn't need to track a truck's location in real time.

A driver communicates with a dispatcher upon leaving one terminal, and again when arriving at the destination. Unless he runs into delays, there's rarely a reason to communicate in transit. But nearly all of YRC's drivers carry cellphones, which they may use for personal or business-related calls when they're not driving.

After about three hours on Interstate 88, Jim crosses the state line from Illinois, entering Iowa near Davenport. A while later, he comes to the state weigh station in Altoona, Iowa, its sign lit to indicate that trucks are required to enter.

Yard workers back in Chicago Heights weighed the truck to make sure its gross weight didn't exceed legal limits and the weight was properly distributed over the axles. Inspectors at the weigh station might or might not ask Jim to drive onto a scale to confirm those numbers. In any case, those inspectors will conduct one of three kinds of inspection: Level 3 (a review of the truck's paperwork), Level 2 (a paperwork check plus a walk-around safety inspection), or Level 1 (a paperwork check plus a detailed inspection of the driver, the vehicle, and the cargo).

Back on the road, Interstate 80 now, Jim rolls along without incident, listening to music while keeping his main attention on the road. As the morning progresses, Jim notices a buildup of dark clouds ahead. Soon, the sky has turned a deep charcoal, and heavy drops start hitting the windshield.

Eventually, those drops become a shower, and then a torrent. Wipers sweeping, Jim turns off his cruise control so he can slow the truck and maintain the safest possible speed as conditions change. But visibility grows so poor, he decides that the safest course is to pull off the highway as soon as possible. At the next exit, he steers the truck to the nearest large parking lot and waits patiently until the storm passes. Then he gets back on the road.

YRC's drivers are well-equipped to handle severe weather and other hazards they meet on the road. According to the company, of its approximately 12,000 employees who hold commercial driver's licenses, 2,250 have logged one million or more accident-free miles on the road.

By about 1 p.m., Jim is ready for lunch and a chance to stretch his legs. Federal law allows a trucker to drive for eight hours before taking a 30-minute break. And since they're paid by the mile, drivers try to keep their stops infrequent and short. But Jim is hungry enough that he doesn't mind stopping now. So the next time he comes across a truck stop, he pulls in. Brian wakes up at about the same time, ready for some food as well.

Truck stops with full-service restaurants that cater to professional drivers still exist, but they're becoming a rarity. Most facilities have evolved into "travel centers," featuring fast food outlets such as McDonald's, Pizza Hut, and Arby's. Some drivers miss the traditional restaurants, which offer larger menus, healthier choices, and a chance to socialize with fellow truckers and wait staff. Others prefer the chance to grab a meal at a familiar chain and get back on the road.

At their travel center, Jim and Brian visit the restroom and enjoy a quick meal, with large coffees. They also drop into the retail shop for a few supplies. The travel center offers showers, but neither driver feels ready for one right now. The facility also offers diesel pumps, but it's too early in the trip for a fill-up.

The truck continues west on I-80, with Brian now in the passenger seat. The sign at the first weigh station in Nebraska is unlit, so Jim and Brian are allowed to cruise past.

STUCK IN THE MIDDLE WITH YOU

All goes smoothly until they get to the outskirts of Omaha, where traffic slows to a crawl. Because Brian isn't driving, he can check for traffic information on his phone. He learns a three-car auto accident ahead has closed multiple lanes just west of an upcoming construction zone. Unless things clear up soon, the backup will put Jim and Brian behind schedule.

Brian calls his dispatcher to alert him about the problem. If Jim were driving alone, this call would have to wait until he found a place on the road where he could pull safely onto the shoulder and stop the truck.

Employees at the Denver distribution center start checking to see if this delay will make any of Jim and Brian's loads late at their ultimate destinations. If that's the case, they'll notify the customers.

The dispatcher also checks on Jim and Brian's next assignments, to see if the delay will affect their ability to make the necessary connections. It looks as though they will be fine. This news is a relief to the two drivers; a missed connection could translate into missed miles on the road, and reduced pay, unless the dispatcher finds them an alternative trip.

Fortunately, Jim and Brian find themselves moving at ordinary highway speeds within about 30 minutes. They continue to make their way across Nebraska, listening to Bruce Springsteen on the satellite radio and chatting, mainly about their families and sports.

As afternoon turns into evening, the two drivers are ready for dinner and a rest stop. It's also time for Jim to start his rest period. They grab a meal at a truck stop and take quick showers.

ON THE ROAD AGAIN

Brian takes over the wheel, while Jim moves into the passenger's seat. Back on the highway, the drivers settle in to listen to talk radio as the truck continues westward. Later, Jim retires to the bunk, and Brian slips Disc 3 of an audiobook mystery into the truck's CD player. His main attention is on the road, but the story helps the miles go by.

The overnight run is generally uneventful. Brian enjoys a couple of protein bars and coffee from a thermos as he drives across the prairie. Entering Colorado, he makes a quick stop to refuel the truck and use the restroom, and then starts the last leg of the trip. Soon, the lights of the Denver metropolitan area appear on the horizon. It's still dark when he pulls the truck into the YRC terminal in Aurora.

Yard workers unhook the two trailers and pull them to a pair of docks for unloading. Some of the freight will go onto local delivery trucks for transportation to consignees in the Denver metropolitan area. Some will go to satellite facilities in places such as Colorado Springs and Clifton, Colo., for local delivery in those areas.

Meanwhile, other workers hook a new pair of loaded trailers to Brian and Jim's tractor. The drivers gets ready for another linehaul trip, this time to Bloomington, Calif. Before long, they are back on the road.

This composite account of a linehaul LTL shipment is based on information provided by Howard Moshier, senior vice president of operations, and Mike Williard, director of linehaul operations, at YRC Freight, based in Overland Park, Kansas. YRC Freight is a subsidiary of YRC Worldwide, which was formed in 2003 through the merger of Yellow Transportation and Roadway.