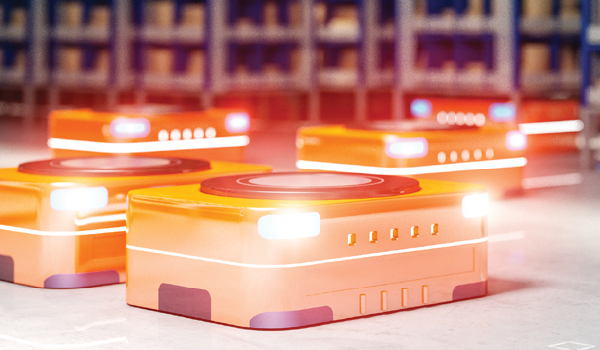 While many companies are automating different areas of the supply chain—from purchasing all the way through to last-mile delivery—it's not quite as widespread and prevalent as you might think.

But automation is definitely on the radar, according to APQC, a Houston-based nonprofit that provides members with benchmarking research. In fact, 84 percent of those responding to the organization's 2018 Supply Chain Management Priorities and Challenges survey say that digitalization will have the biggest impact on the supply chain in the next three years.

Awareness, however, doesn't necessarily translate to action. "A lot of hype and conversation might lead you to believe that digitalization is reality," says Marisa Brown, a senior principal research lead at APQC. "The truth is that it is not yet widespread."

"There has been a shift in where automation is being used," he adds. "It's not just moving through the first mile—it's also in the middle and the last mile."

Noting the well-established impact of the Amazon effect, shippers in particular are looking to automation to "reduce the touches," Oca says.

Many companies are turning to robotics to reduce those touches and to handle repetitive tasks while improving efficiency.

"The trend is to drive out human labor that is repetitive," says Steve Sheiner, vice president of business development at Brain Corporation, a company that helps robots navigate. "Efficiency is critical to survival. Companies have to adapt rapidly, and if they're not adopting some form of robotics, they will not be able to compete."

QiO Technologies provides software that pulls data from legacy systems and other sources and harmonizes it so that it can be used to guide automated processes and improve decision-making. As an example, the company cites the world's largest glass manufacturer, which uses industrial furnaces to produce more than 5,000 products daily.

The temperature of its manufacturing furnace is raised for larger products and lowered for smaller ones. With smart energy meters installed at the line, the manufacturer gets data showing how much energy each furnace consumes throughout the process.

Integrating that information with production schedules from enterprise resource planning systems digitally, rather than manually, allows the fusion of the two sets so that the company can optimize energy per product manufactured.

"Our technology lets that kind of data aggregation happen on a massive scale," says Gary Chandler, consulting services director at the UK-based firm.

In warehousing and shipping, automation serves several purposes that include helping to:

At Catania Oils, a Massachusetts-based blender and packer of cooking oils, automation streamlines the movement of products from production in the back of the building to distribution in the front. Five overhead conveyors now carry individual boxes of products from the production line to palletizers in the front. Automation has made it possible for the company to recently shift from five palletizers to two.

This approach creates an "accumulation area" where cases queue up for each palletizer. When one conveyor fills up, the system tells the palletizer that line is ready. The palletizer knows that the company is running that product at, for example, 36 cases on a pallet, and automatically changes all its parameters for the products it's now receiving.

"In the past, we had a lot of forklifts moving around constantly from back to front," says Dan Brackett, director of manufacturing and engineering. "Now, products are carried three-fourths of the way to the shipping area on overhead conveyors ."

The new automation has increased each line's yield by 20 percent, he adds.

Contract logistics provider DHL Supply Chain is testing autonomous pallet trucks that include vision-guided and self-driving options for that long distance from plant to warehouse.

"In some cases, product shuttles through a long tunnel or corridor to the warehouse," says Adrian Kumar, vice president of solutions design in Ohio. "Automating that horizontal travel frees up the pallet truck driver to do more skilled work related to that navigation."

Moving materials with semi-automated forklifts—something Catania plans to consider in the future—helps improve productivity while reducing operator fatigue. With Crown Equipment's remote order picking system, technology allows the operator to move the vehicle forward a pre-determined distance with the touch of a button without getting back on the forklift. The process keeps the forklift in front of the employee.

"It might not seem like much, but the repetitive task of getting on and off that platform—continually stepping up and down—adds up to thousands of steps every day," says Jim Gaskell, director of global technology business development at the Ohio forklift manufacturer.

Forklift automation improves productivity by 10 to 20 percent, depending on the application. "If the improvement is less than 10 percent, there's usually a process issue that we need to address before the user reaches optimal performance," Gaskell adds.

In one case, Stratix was even able to equip a forklift operating in a freezer—less than ideal operating conditions for a mobile device—with an iPad. "We added a heated pad and mounted the iPad inside it and it worked," Nielsen says.

ShipMonk, a Florida software company that offers third-party logistics services, has automated the picking process with the first e-commerce automated storage and retrieval machine in the United States. Each machine holds 7,000 SKUs and offers distinct advantages in a segment where orders must be picked and shipped quickly.

Automation extends to transportation and delivery, too—just ask any truck driver. The electronic logging device (ELD) mandate that went into effect at the end of 2017 requires drivers to log their hours with a digital device that collects and transmits data.

Delaware's DeliveryCircle uses proprietary software to automate the package and driver matching process for deliveries in verticals that include automotive, medical, pharmaceutical, and retail in 19 cities.

"We don't have a lot of operations people because the system keeps an eye on things; we don't have to," says CEO Vijaya Rao. "If our technology was less sophisticated, we would have at least double or triple the number of people in operations."

For example, if a pickup is scheduled for noon and it hasn't happened by 12:05 pm, the system automatically triggers a message that there might be a delay.

DeliveryCircle's software knows which drivers are certified to transport goods to and from blood banks, labs, and hospitals; who can deliver pharmaceuticals to hospitals and consumers; and which people drive autos, cargo and mini-vans, or box trucks. The system automatically matches driver certification, vehicle size, and goods to be delivered.

Still, as sophisticated as it all sounds, "The vast majority of operations are still relatively conventional in nature," says Kumar.

"There's a lot of different technology out there, but many operations still look the same way they did 20 years ago," he adds. "The difference might be that companies pepper in different innovations here and there."

How Automation Protects the Supply Chain

When Stockmeier, one of Europe's largest chemical distributors, received an alert from its supply chain risk management provider about a fire at a Rotterdam supplier, it wasted no time taking action.

Even before receiving firsthand information from the supplier, Stockmeier decided to import two strategic products from another provider. The next day, the Rotterdam supplier declared force majeure on all products that the chemical distributor bought from them. In addition, the fire had significant consequences across the entire chemicals supply base, resulting in steep price increases for the next six weeks.

Because it acted immediately after receiving the alert from riskmethods Inc., and before the news was widely publicized, Stockmeier saved $300,000 by purchasing before prices increased.

Riskmethod's sophisticated automated system generated the alert sent to Stockmeier. It digitizes its clients' supply chains, then marries that location and production information with near real-time data on weather, labor strikes, business viability, and any other potential disruptors to the flow of goods or the customers' brands. The software then monitors each supply chain for new and emerging threats and notifies companies of actual or potential issues.

The automated monitoring eliminates the need for manual information gathering that has been the norm in risk management.

"One customer had a team of 20 doing this but it simply wasn't sustainable," says Bill DeMartino, general manager of North America for riskmethods. "By automating this piece of their risk management, they were able to free up those people to collaborate with suppliers to innovate and ensure supply continuity."

Sixty-five percent of companies dealt with a serious supply chain disruption in the previous 12 months, according to the Business Continuity Institute Supply Chain Resilience Report 2017. These events are often costly and can be fatal—another source reports that nearly one-third of those that face a major disruption are out of business in two years.

Using automation to protect the supply chain does more than help companies react quicker or reallocate internal resources to other tasks. It can also help reduce insurance costs.

"Many companies buy property, business interruption, and contingent business insurance," DeMartino says. "Insurance companies often provide discounts, higher limits, or lower deductibles depending on the customer's risk management program. Because of our process, some companies can save more money on their insurance than they paid for our solution."

While increased automation can create efficiencies, it can create problems too. One involves managing handheld devices used as part of an automated process or system.

"Many companies don't manage their handhelds at all, relying instead on the honor system," says Kent Savage, CEO of Apex Supply Chain Technologies in Cincinnati. "Others dedicate a full-time employee to this process. Either approach creates a variety of issues, including device hoarding and loss, as well as lower employee productivity, wasted time, and costly replacements."

Apex solves the problem with more automation: smart storage lockers. The cloud-connected units require employees to check out and check in their handhelds and allow them to recharge the devices when in storage.

Process improvements offer a return on investment in an average of one to three months, says Savage, citing four areas that make a difference:

1. Cost savings: Better monitoring yields as much as a 40-percent reduction in device replacement costs.

3. Continued device availability: Because employees have their own locker, workers on each shift are assured there's a fresh device waiting for them.

4. Better use of manager time: If devices aren't returned at the end of a shift or need service, managers receive alerts automatically. Less time spent with these issues frees up managers to use their time on other tasks.

When lockers are placed next to the time clock, employees punch in, get their devices, and go straight to work, no longer wasting time looking for a charged device.