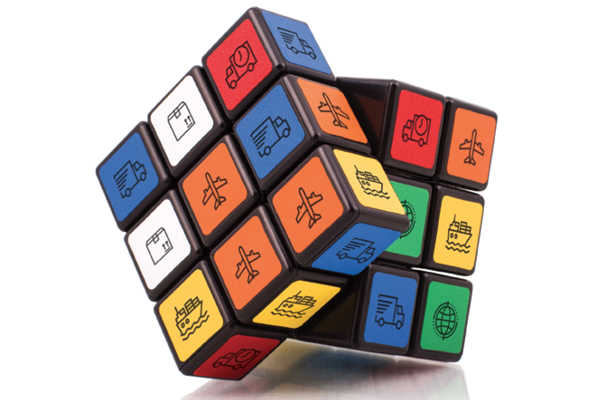 Logistics professionals called on to execute an outside-the-box project need to think across dimensions and time zones while puzzling through every challenge.

When it comes to noggin teasers, there's the Rubik's Cube and the out-of-the-box logistics project. With all its moving parts, the Rubik's Cube has been known to stymie even the brainiest of brainiacs. But it's nothing compared to some of the special projects that cross the logistic professional's drawing board.

Charged with transporting two national treasures—kingdom: Animalia; phylum: Cordata; family: Ursidae—from their native China to a zoo in faraway Finland? Need to deliver a trove of country music artifacts to the Big Apple? Tasked with ferrying one-of-a-kind priceless artwork to an exhibition space in another nook of the continent?

Not a problem. Just bring on the puzzle masterminds who can think in 3D and anticipate every looming scenario.

Of all the world's endangered species, giant pandas surely have the most decorated passports. Thanks to agreements between the Chinese government and conservation organizations worldwide, the ebony and ivory bears are always on the move.

But getting them from home base to new digs on the other side of the globe requires plenty of know-how.

Enter Volga-Dnepr Airlines, a Russia-based carrier that bills itself as a world leader in outsize and heavyweight air cargo. If that cargo has a pulse and persnickety dietary requirements, so much the better. In fact, Volga Dnepr has, over nearly three decades, developed expertise in transporting endangered species, dispatching rhinos from Africa to Russia one day and transporting rare Przhevalsky horses to Point Z the next.

More than Crates and Cranes

It also involves the flexibility to tailor a transportation plan in accordance with each species' particular needs. In the case of two Panda charmers named Lumi and Pyry, shipped by chartered flight to Finland as part of a 2017 agreement between the Chinese and Finnish governments, the special accommodations began with selecting the aircraft that would make the nonstop flight.

"For transportation of the two much-awaited pandas, Volga-Dnepr used one of its modernized IL-76TD-90VD, which is able to operate long-haul flights without stops," Nefyodov says.

The plane's special features facilitated loading the bears. "The animals were traveling in transparent glass transport boxes, provided by the Dujiangyan Panda Center, large enough for the animals to move comfortably during the whole delivery process," Nefyodov says. "The transport boxes were loaded and unloaded with the help of the IL-76's inner cranes. The loading process was planned and organized according to a strict and tight schedule."

To ensure a smooth and peaceful flight, highly qualified Homo sapiens focused on their health and comfort accompanied the Very Important Pandas. "Both special passengers flew more than 6,500 kilometers from Chengdu to Helsinki in 11 hours," Nefyodov says. "They were accompanied by two animal handlers and two veterinary physicians, and had a supply of 120 kilograms of bamboo on board, together with fruit and drinking water."

Special attention was focused on the craft's temperature and on ensuring that the animals were braced for Finland's wintery chill.

"The crew maintained a set temperature range between 22 and 25 degrees Celsius," he adds. "One hour before landing, the crew gradually lowered the temperature in the cargo hold to 10 degrees Celsius to help the pandas acclimatize gradually for their arrival in snow-covered Helsinki."

Thanks to all the planning and focus on details, the pandas arrived without incident in the northern latitudes, where they were greeted at the VIP terminal by Finland's Minister of Agriculture and Forestry, China's Ambassador to Finland, and a host of officials from the Ahtari Zoo, their new home.

With so many luminaries eagerly awaiting the pandas, it was, Nefyodov says, imperative that Volga-Dnepr live up to its commitment: delivering the guests of honor with "no discomfort, no delays, nor any other disruption."

On The Road Again With a Country Music Hit

New York has its philharmonic, its jazz scene, its punk playgrounds, and its storied rock clubs. And now, thanks to a collaboration between Opry Entertainment and Tennessee-based Averitt Express, the city that never sleeps can partake of Nashville's finest music and cookery at Opry City Stage in Times Square. It's New York's very own four-story rendition of the Grand Ole Opry experience, complete with priceless country music memorabilia.

How did all that country treasure end up in midtown Manhattan? Now there's a yarn worthy of a string of verses, a toe-tapping chord progression, and a bridge or two.

When Opry Entertainment decided it wanted a presence in New York, it turned to the specialized services division of Averitt Express, a transportation and supply chain management services provider.

"Our department operates as a company within a company," says Calvin Craigo, operations leader of the division. "Across the board, we're a jack-of-all-trades."

Even so, the Opry Entertainment assignment was daunting. Not only did the company want a firm to crate and transport gold records, posters, guitars, old photographs, and artifacts from the archives, it needed tender loving care for the shipment of a one-of-a-kind wonder: a three-panel wall installation made of 10,000 guitar picks.

Typically, Craigo says, Averitt outsources the crating for its jobs, but this gig was so special—and so likely to cost gazillions—that the logistics team decided to customize crates for the stash of collectibles. The team also opted to package everything onsite, with double layers of bubble wrap, at Opry Entertainment's storage facility.

"It would have taken the truck falling off a bridge to damage this cargo," Craigo says, adding that "the first priority was making sure the freight arrived undamaged."

Security was also a priority. Country music artifacts—one of Minnie Pearl's pricetag-festooned hats, say, or a famous crooner's signature black shirt—can fetch princely sums on the black market. To ensure that the Opry freight would not fall prey to unscrupulous opportunists, Averitt outfitted the truck with sensors calibrated to alert Craigo's department if the trailer door was opened.

What's more, the truck's route and contents were disclosed only on a need-to-know basis. And next to no one, Craigo says, needed to know.

The truck left Tennessee on Thursday and arrived in New Jersey on Sunday, just ahead of its scheduled Monday delivery date and with plenty of time for the venue's New Year's opening. In the Garden State, the collection was transferred to three smaller trucks that could better navigate New York's notoriously impassable streets. Delivery was scheduled for a designated early-morning hour when a crew of eight would be on hand to unload the vehicles and cart the crates into storage. "We didn't want anything sitting on the dock," Craigo recalls.

At mission's end, Craigo's assessment of the project could be summed up with the kind of superlatives that have no place in a somebody-done-somebody-wrong song: "We did overkill planning on this move," he says. "Nothing was left to chance."

The Challenges of Working in Harmony

To create Harmony, an installation piece that integrates digital art and traditional craftsmanship, Chinese cross-media artist Wang Kaifang drew on the talents of 80 craftsmen working for 100 days. Together, they toiled to mold 24 tons of stainless steel and 80,000 sheets of 24-karat gold. The effort involved around 3 million hammer strikes and the welding of 1.8 million joints.

When it came time to transport the colossus from Nanjing to a resort in Macau, a logistics team from the Panalpina Group, a global supply chain solutions provider, was given a mere few days to get the job done.

This is just the kind of operation that jazzes the firm's logistics pros. "Panalpina is well known and appreciated in the Chinese market for its experience in handling one-off overdimensional projects," says Grace Chaom, business unit manager for Panalpina's Macau and Zhongshan operations.

"We were given just one week for planning," Chaom adds, noting that the company is accustomed to urgent requests and maintains "a high level of readiness."

Working According to Plan

The team confronting the Harmony challenge was assembled from the logistics talent pool at Panalpina operations in Nanjing, Zhongshan, and Macau. The group worked closely with the client to plan everything from the crating of the unwieldy and unconventional cargo to the routing of the truck convoy that would snake through 1,600 kilometers of countryside and urban sprawl.

The convoy left Nanjing with the installation distributed across 11 flatbed trucks. At Zhuhai, Panalpina shifted the cargo onto 16 smaller vehicles. This, Chaom says, was necessitated by the size and weight limitations on Macau's roads. To ensure that all the trucks in the sizable convoy remained together, Panalpina monitored its progress mile by mile. "The team tracked the convoy by GPS and further monitored it with calls to the convoy team lead for status updates at milestones throughout the day, every day," Chaom says.

Because of the tight deadline, crews tag-teamed the various responsibilities. For example, "All trucks had two-driver teams driving day and night non-stop while respecting the legally required rest times," Chaom says. "Cargo size was considered for route planning, taking into account corners, bridges, and tunnels. We also took into account rush hours in urban areas."

Although no documentarian of the venture counted the potholes traversed, left turns negotiated, or traffic jams endured, Harmony arrived in Macau with 48 hours to spare.

"Good weather allowed us to deliver two days ahead of schedule," Chaom notes. Given, as promotional materials proclaim, that the work "manifests the harmony among heaven, earth and man," factors beyond the weather may have played a role.

Related Articles
Project Logistics: Going the DistanceThe Keys to Dangerous Goods/Hazmat Shipping ComplianceTurn to Technology to Attract the Next Generation of WorkersTransparency to Efficiency: How IoT Can Increase the Productivity of Your Transportation (Sponsored)5 Hacks for Recruiting in Supply Chain ManagementAdding Value to Your Supply ChainCarrier Network Plants Seeds of Delivery EfficiencyIncoterms: Playing by the RulesMost Mid-Market Supply Chains Are Under-ServedRedefining Globalism? More related articles...