Southeast Asia: Region on the Rise

With an average annual economic growth rate of more than five percent, the countries that comprise this dynamic region represent a thriving trade and economic hub, despite infrastructure and regulatory challenges.

Consisting of 11 countries reaching from eastern India to China, Southeast Asia is generally divided into "mainland" and "island" zones. The mainland—comprising Burma, Thailand, Laos, Cambodia, and Vietnam—is an extension of the Asian continent, while Island Southeast Asia includes Malaysia, Singapore, Indonesia, the Philippines, Brunei, and the new nation of East Timor, formerly part of Indonesia. These countries' diversity lies at the heart of the region's rapid economic growth.

Southeast Asia's 11 countries have a combined gross domestic product (GDP) of $1.9 trillion; a population of almost 600 million people; and an average per-capita income nearly equal to China's, according to Southeast Asia: Crouching Tiger or Hidden Dragon?, an article published by the International Economic Bulletin.

Over the past decade, the countries have averaged a growth rate of more than five percent per year. If Southeast Asia were one country, it would be the world's ninth-largest economy. It would also be the most trade-dependent, with a trade-to-GDP ratio in excess of 150 percent.

U.S. imports from Southeast Asia have grown steadily over the past few years, reports global trade intelligence firm Zepol (see chart below). Much of this import traffic comes from Malaysia and Thailand, but Vietnam is quickly catching up. The region as a whole experienced significant U.S. import growth in the third quarter of 2012, rising 1.3 percent from the third quarter of 2011.

"Trade activity is increasing in Southeast Asia, particularly from Vietnam," says Paul Rasmussen, CEO, Zepol. "As labor costs rise in China, more companies are turning to nearby countries to fill their orders."

For much of the 1990s, Southeast Asia was the infrastructure finance capital of the world. But after the Asian financial crisis in 1998, the sector slowed dramatically. Today, despite economic growth, much of Asia continues to grapple with an infrastructure deficit.

"While GDP, industrial output, and consumption have soared across the region over the past decade, power, water, and transport systems have struggled to keep pace," writes Nicolas Lord in Changing Lanes, an article in Emerging Markets.

Since Asia's financial crisis, the region's infrastructure needs have almost exclusively been met by the state. "But the requirements are now so large, and the demand for quality so great, that the way Asian infrastructure is being financed is undergoing a profound change," continues Lord.

Many governments are now actively courting private involvement. Over the next 10 years, $1 trillion of the region's projected $8 trillion in infrastructure projects will be open to private investors under public-private partnerships, estimates a recent report by global consultancy McKinsey.

But regulatory risks—including excessively high transport costs, urban congestion, and inadequate air transport competition and efficiency—are likely to hold back private capital from reaching its full potential in the region.

While Southeast Asia has experienced significant economic growth over the past 10 years, it is a region at a crossroads. Its continued growth relies on deeper regional cooperation and integration from a policy perspective, and market-driven intervention by businesses that aspire to expand their footprint across the national borders, according to Destination Southeast Asia: A Joint Pathway to Future Growth?, a 2011 report from consulting firm Accenture.

"Early indicators are promising stable real GDP growth; substantial (and growing) consumer markets; strong labor forces; and steady economic and market transitions across its economies," notes the report. "By taking the right path now, the region will be well on its way to becoming a formidable economic powerhouse by 2020."

Here's a closer look at five of the Southeast Asian countries that will lead the way. 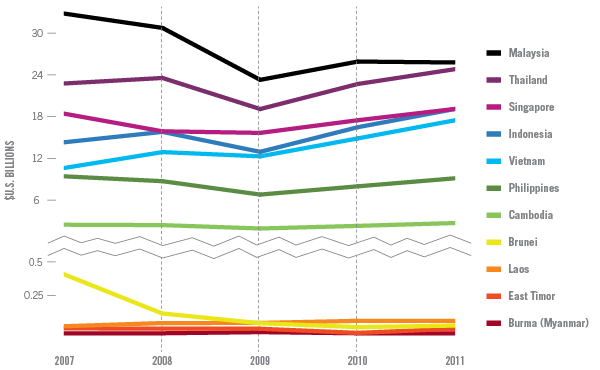 Singapore recently ranked as the number one logistics hub among 155 countries globally in the World Bank's 2012 Logistics Performance Index. "Singapore's strategic location in the heart of Southeast Asia, and at the nexus of major shipping lanes, has made it an important logistics hub and conduit for world trade," says Paul Rasmussen of Zepol.

Singapore is a prime location for major logistics firms—20 of the top 25 global logistics service providers conduct operations there. Most of them—including DHL, Kuehne + Nagel, Sankyu, Schenker, Toll, UPS, and Yusen Logistics—have set up regional or global headquarters in Singapore.

Singapore's Changi Airport is one of Asia's largest cargo airports, and is served by more than 6,100 weekly flights connecting to 210 cities in 60 countries, handling close to two million tons of cargo. The country also boasts the world's busiest seaport and is the world's top transshipment hub, handling close to 30 million TEUs in 2011. Ocean carrier APL transports the majority of goods from Singapore, followed by OOCL and NYK Line. Singapore is connected by 200 shipping lines to 600 ports in 123 countries, with daily sailings to every major port of call in the world. It is also proximate to the world's major markets, and a seven-hour flight from half of the world's population in Asia Pacific.

Pharmaceutical products from Singapore experienced an upward spike in the third quarter of 2012, similar to the trend seen in 2011. Computer accessories and semiconductors also top the U.S. import list from Singapore.

Indonesia was the 27th-largest exporting country in the world in 2010, moving up three spots from 2009, according to World Trade Organization data. Indonesia's main export markets are Japan (17.28 percent), Singapore (11.29 percent), the United States (10.81 percent), and China (7.62 percent).

The country's major export commodities include oil and gas, electrical appliances, plywood, rubber, and textiles. Indonesia's top export to the United States is apparel and household goods made from cotton, followed by rubber and non-wool or cotton apparel and textiles. The country's major imports include machinery and equipment, chemicals, fuels, and foodstuffs. U.S. imports of crude oil from Indonesia have plummeted in recent quarters.

"The Port of Jakarta has seen a drop in TEUs, while the Ports of Semarang and Palembang are gaining market share," says Rasmussen. APL and Maersk Line are the top two ocean carriers for U.S. imports from Indonesia.

The country's economy, one of the largest in Southeast Asia, involves both the private sector and government playing significant roles. The industry sector is the economy's largest, and accounts for 46.4 percent of GDP. It is followed by services (37.1 percent) and agriculture (16.5 percent). The country has extensive natural resources, including crude oil, natural gas, tin, copper, and gold.

But weak transport infrastructure has hindered Indonesia's integration into regional production chains and its internal economic integration and development, according to Southeast Asian Economic Outlook 2010, a report from the Development Centre of the Organization for Economic Co-Operation and Development. "The problems in transport can be attributed to a combination of inadequate roads, ports, and other physical infrastructure, together with weak regulatory policies, customs procedures, and planning," says the report.

Malaysia, the leading Southeast Asian country for U.S. imports, experienced a massive increase in the number of exports of semiconductors and telecommunications equipment to the United States in recent years. Conversely, computer accessories and computers being imported from Malaysia have dropped significantly in 2012. Most of Malaysia's exports depart through the Port of Tanjung Pelepas; Maersk Line and CMA CGM are the top ocean carriers.

Continuing global economic uncertainties and lower commodity prices are expected to impact Malaysia's GDP growth in 2013, according to the Institute of Chartered Accountants in England and Wales. In 2011, the GDP was about $450 billion—the third-largest economy in ASEAN, and 29th-largest in the world.

Malaysia's infrastructure is one of the most developed in Asia. The country's longest highway, the North-South Expressway, extends 500 miles between the Thai border and Singapore. The road systems in East Malaysia are less developed and of lower quality in comparison to that of Peninsular Malaysia.

Malaysia operates 118 airports, of which 38 are paved. The country's official airline is Malaysia Airlines, providing international and domestic air service alongside two other carriers. The railway system is state-run, and covers a total of 1,149 miles. The Asean Rail Express is a railway service that connects Kuala Lumpur to Bangkok, with plans to eventually stretch from Singapore to China.

Thailand has a GDP worth U.S. $602 billion, classifying the country as the second-largest economy in Southeast Asia after Indonesia. Despite this ranking, Thailand falls midway in the wealth spread in Southeast Asia, as it is the fourth-richest nation based on GDP per capita—after Singapore, Brunei, and Malaysia.

Vietnam may be the fastest growing of Southeast Asia's emerging economies by 2025, with a potential annual growth rate of about 10 percent in real dollar terms, according to a forecast by PricewaterhouseCoopers. That would increase the economy's size to 70 percent of the United Kingdom's by 2050.

The majority of goods depart from the Port of Vung Tau, and arrive at the Port of Los Angeles. Ocean carriers Maersk Line, Mitsui, and Hanjin have large market shares of import transportation.