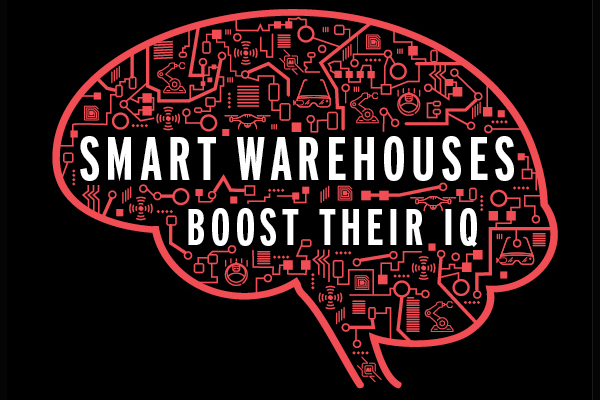 Implementing IoT, AI, drones, and other intelligent digital solutions in your warehouse is a brilliant move.

Warehouses keep growing smarter, and much of that IQ boost comes from technologies that interact with warehouse management systems (WMS). All on its own, a WMS can bring a warehouse operation a game-changing level of intelligence. Today, though, companies are using solutions based on the Internet of Things (IoT), artificial intelligence (AI), robotics, and other digital technologies to extend the advantages of a WMS even further.

Here's a look at some of the best and brightest digital developments in warehouse management.

Robots in the warehouse take many forms, including traditional automated storage and retrieval systems (ASRS)—fixed systems that perform a specific task, such as piece picking, in one spot—and autonomous systems that move from place to place.

Both systems can exchange data with any WMS through an application programming interface (API). And both incorporate OPEX's iBOT, a multidirectional vehicle with wireless communications that transports product from place to place.

"iBOT robots navigate along an integrated track system, retrieving, storing, and sorting inventory items quickly and accurately to or from an array of order and storage locations," says Monty McVaugh, engineering project manager at OPEX.

Sure Sort provides high-speed, automated sorting. "The Sure Sort iBOT picks up and loads individual products, or 'eaches,' that are placed on an infeed conveyor, which is inducted by a human or robotic automated system," says McVaugh. "The product is then sorted and assigned to the appropriate bin. It then repeats this operation."

Robots are common in warehouses these days, and one facility might use several different systems for different functions. Unfortunately, each robotic system has its own proprietary software for communicating with the WMS, and connecting several systems at once could cause conflicts.

Kenco hopes to solve that problem. It is working with SVT Robotics, which has built a middleware platform that takes input from all the different types of robots, connects to the WMS one time, and optimizes the parsing of work to the different robots.

Developers at Blue Yonder hope to build a similar capability into the company's own WMS. The current working name for this feature is "task orchestration," says Matthew Butler, director of industry strategy at Blue Yonder. "It allows us to use cloud computing power to understand the relationships between warehouse tasks, whether they're performed by a robot or by humans."

Analyzing all the work the warehouse needs to accomplish, the resources available, and deadlines for filling various orders on time and in full, the technology would assign tasks to resources as effectively as possible.

Blue Yonder's system would also pull in data from robots as they went about their work on the warehouse floor. "That way, we can more holistically orchestrate, knowing their availability and the inventory that they have, which orders should be allocated to one zone or another, one robotics provider or another, with the objective of accuracy and speed," Butler says.

As IoT sensors give WMS solutions more data to work with, AI gives them greater analytic power. "Many WMS vendors have been trying to add more AI decision-making algorithms in their software," says Jeremy Tancredi of West Monroe Partners.

For example, AI could bring more subtle reasoning to decisions about where to place product. WMS solutions have traditionally looked for slots that fit the size of various pallets, and also tried to group similar pallets—putting together all the canned soups, for instance. But AI might recognize ordering patterns that should influence put-away processes.

"Every time soup is ordered, for example, crackers are ordered as well," says Tancredi. An AI system might also recognize the need to group marshmallows near hot chocolate during the winter, but near graham crackers and chocolate bars during the summer, he says.

As IoT sensors can detect the need for maintenance on mechanical systems, AI can use data from those sensors to predict problems before they occur.

"The AI starts to recognize patterns, such as, 'What did that shuttle look like right before it broke down?'" says Tancredi. By prompting crews to perform preventive maintenance, predictive analytics could help avoid shutdowns.

In warehouses that use robots, AI transforms those systems from machines that passively take direction from the WMS to smart systems that adjust their work based on real-time conditions.

"For example, their sensors identify other robots in the same pick area," Tancredi says. "So they resequence their order and travel in a different manner to avoid those areas of high congestion."

As a robot optimizes the picking process, it sends information about the revised route back to the WMS.

Drones Do a Head Count

RFID readers and other IoT sensors on drones are starting to appear in the warehouse. RFID-reading drones can possibly be used for cycle counting.

"You may miss some product if you do manual cycle counts," notes Jeremy Tancredi of West Monroe Partners. "But if you send a drone through the warehouse, it will pick up the RFID frequency and find that pallet that you thought you lost weeks ago."

In its Innovation Lab, a 10,000-square-foot test facility in Chattanooga, Tennessee, third-party logistics (3PL) provider Kenco has been investigating the use of drones for cycle counting. Working with a drone development startup, Kenco plans to start pilots of the system in several of its own facilities by late 2020.

"Using machine learning, AI, and IoT in combination with Wi-Fi technologies, drones are becoming quite powerful," says Kristi Montgomery of Kenco. The newest systems can find their own way around a warehouse, eliminating the need to install location markers. These drones also incorporate cameras that can read both barcodes and alphanumeric characters.

All the drones can recognize a pallet, but some will soon go even further. "Several startup companies are working to be able to count how many cases are on that pallet and understand what product is on the pallet," Montgomery says. In the near future, their drones will also be able to detect and account for a second pallet stored behind a first, she adds.

In addition, Kenco's partner in its pilot program is developing a drone that can change its own battery by dropping the spent battery into a charging dock and picking up a fresh one.

For humans in the warehouse, new head-mounted display systems use augmented reality technology to deliver instructions from a WMS while leaving hands free to work with inventory. One such product is Zebra's recently introduced HD4000 wearable unit.

Used with Zebra's FulfillmentEdge software, the HD4000 helps new warehouse associates learn their jobs quickly, and it improves productivity for all associates, says Mark Wheeler, director of supply chain solutions at Zebra. "It's intuitive, and our early proof-of-concept shows it can reduce onboarding time up to 90%."

Kenco recently implemented a vision-picking system from LogistiVIEW, which includes augmented reality glasses from Vuzix. It added this technology to help a customer bring picking accuracy to 100% and to improve service to its retailer customers.

The system improves accuracy by providing visual cues. "As an associate walks up to a rack full of product, it highlights the right location in green and all other locations in red," says Kristi Montgomery, vice president of innovation, research, and development at Kenco. After each pick, the system provides a voice confirmation. "If they happen to pick the wrong product, it throws a big, red X over it and waits for them to pick the right product."

Warehouse Technologies to Bear in Mind

As companies collect and synthesize more data about customer demand and the status of inventory at any point in the supply chain, they can make better decisions about activities in a warehouse.

"Getting comprehensive, end-to-end visibility allows you to think more holistically about what you should do in the warehouse," says Matthew Butler of Blue Yonder. "How proactively can you anticipate order item availability so you can prepare order volumes and start thinking about cubing out your trucks?"

Butler calls that capability "demand chain insight" or "end-to-end supply chain insight." It requires a company to combine demand forecasting signals, from a variety of forecasting tools, with inventory status data that is as current and detailed as possible.

"We're looking to better leverage upstream demand projection signals, out of stocks, and the value of the product and its impact on the bottom line," Butler says. That information will drive decisions about which products to unload first, how to prioritize crossdocks, and how to replenish product lines more aggressively.

For years, planners have used modeling and simulation software to test potential operational strategies without making physical changes to a warehouse.

Today, however, software exists that takes modeling one step further, building a "digital twin" of a warehouse. The digital twin software runs multiple "what-if" scenarios, uses AI to evaluate the results, and then applies those evaluations to current operations.

For example, as trucks bring inventory toward a facility, the software might determine the best way to handle that inbound product, and then instruct the WMS to change certain rules to implement that plan.

"Warehouse managers use the software to make operational decisions, not just as an engineering design tool," Tancredi says.

RFID in the Warehouse: A No-Brainer

"There is a long-term trend toward implementing the Internet of Things into the warehouse," says Mark Wheeler of Zebra Technologies in Holtsville, New York. That includes more extensive use of radio frequency identification (RFID) for data capture.

One recent advance is the use of passive RFID tags—which do not require batteries—with wide-area readers that capture data from across about 1,600 square feet.

Zebra's new wide-area reader, the ATR7000, can determine the location of any tag within a few feet, keeping the WMS aware of an item's status in the warehouse at all times, not only when it passes through a dock door or another portal.

"Passive technology enables us to put a low-cost, single-use tag on materials and extend real-time visibility down to that level," Wheeler says.

Backed by this technology, a WMS could, for instance, prioritize the handling of different items on a receiving dock.

"Not only can I know what's there without requiring someone to scan to a staging area, which they might or might not do properly, but I can have rules to act on based on what's happening on the floor," Wheeler says.

For example, if the system detects products that demand an unbroken cold chain, the WMS can instruct associates to move those items to refrigerated storage before performing other tasks.

In another IoT application, Zebra's SmartPack Trailer uses a video camera and a light detection and ranging (lidar) sensor to build a three-dimensional record of freight as associates load it into a trailer. Rather than rely on a supervisor to oversee the process in person, a company can evaluate performance based on data from the system.

"You can generate alerts based on predefined criteria, such as a particular trailer being loaded at low cube utilization," Wheeler says. "That's a coaching opportunity for the loader."

IoT sensors on equipment in a warehouse can provide data to predict when a machine will need maintenance or new batteries, says Matthew Butler of Blue Yonder in Scottsdale, Arizona. The WMS can incorporate that information in its planning.