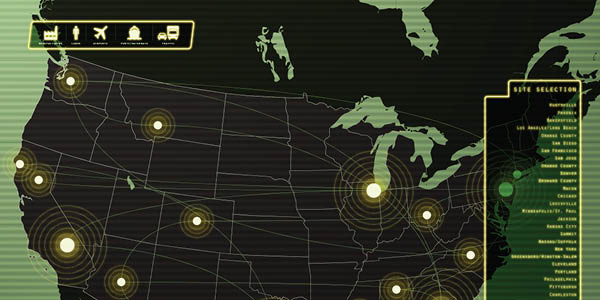 The supply chain may be global, but regional factors such as population density and facility costs determine where and how businesses store and distribute inventory.

Choosing a new logistics facility or distribution center (DC) site involves weighing a number of factors and considering numerous details. The best way to start is by thoroughly examining the elements that combine to support your business needs.

The sourcing/production side of the supply chain usually starts anywhere low-cost materials, labor, and production are available. The options narrow, however, when inbound logistics and distribution functions enter the equation. The earlier in the process a company considers logistics, the more likely it can design supply chain costs and performance to withstand external or internal disruption.

The distribution side of the supply chain is nearly a mirror image of the sourcing decision, but it is driven by the location of high-value customers, not low-cost manufacturers. The network that serves the end user or consumer reflects not only demand, but also customer service needs. Proximity is important in serving a just-in-time automotive plant, for example, and speed to market can be key for fashion-sensitive consumer goods.

Many of the same factors come into play when making sourcing and distribution decisions. Local transportation infrastructure, congestion, and available transportation and logistics services are important site selection considerations, whether a company manages logistics in-house or outsources to a third-party service provider. Key factors such as the number, type, and condition of roadways, rail lines, inland waterways, and airports directly affect the ease, consistency, and cost of the flow of goods from the source.

Distribution is driven by the location of high-value customers, not low-cost manufacturers.

In most cases, examining infrastructure factors will be an exercise in risk management. In addition to infrastructure-related factors, having access to alternative solutions and services can help when responding to disruptions.

The ports and airports serving a region play key roles in supply chain performance. Many developing regions have made strong commitments to creating and enhancing port capacity. Monitoring these commitments and the progress toward completion will be important to ensure minimum disruptions and maximum efficiency. A stalled infrastructure project or the addition of tools, taxes, or fees to cover costs can dramatically change the original assumptions made in a sourcing decision.

Another factor that comes into play during siting decisions is local regulations. Rules governing transportation and other logistics functions can limit capabilities or capacity, for example. In domestic U.S. logistics, a common area of concern is size and weight restrictions on motor carriers. Tolls, taxes, and fees also come into play. Any of these factors can change based on the needs and desires of local, regional, or national authorities.

Labor cost and availability are other key factors to consider when choosing a facility location. General labor conditions bear watching, but a more difficult area to evaluate is the market for specialized logistics and supply chain management skills and talent. Areas with substantial logistics operations may have a strong talent pool, but there may be more competition for that limited resource, which can add cost. Constant turnover can also disrupt operations.

Modeling sales/consumption and overlaying future expansion plans provide a good picture of where volumes are concentrated. Optimizing a service strategy with attention to cost is a complex exercise. Deciding how many facilities are necessary to achieve those goals includes the density and distance of distribution lanes.

A generic version of this exercise determined the best warehouse locations to reach the U.S. population in the shortest transit time. The 10 Best Warehouse Networks model, developed by Chicago Consulting in 2009, displays networks comprised of one to 10 warehouses, and shows projected throughput for each warehouse.

The Chicago Consulting model assumes every member of the U.S. population is a customer, so it's biased toward population. For example, an original equipment manufacturer supplying the automotive industry and aftermarket would have a different customer/population base. The consulting firm's report demonstrates how the algorithms of its model attempt to optimize transit times, and the impact this has on individual warehouses.

Using the Chicago Consulting model, a single warehouse serving the entire U.S. population from Henderson, Ky., would be located within an average of 804 miles of its customers and have an approximate lead time of 2.27 days.

With five warehouses, the Chicago Consulting model achieves an average distance to customers of 264 miles and a lead time of 1.13 days. Throughput by location is:

The recently completed U.S. Census certainly affects the results of the Chicago Consulting report, based on shifting patterns of population density. In fact, the U.S. Census Bureau released its own "mean center of population" for the United States in April 2011.

The point outside Plato, Mo., is 23.4 miles southwest of the mean center of population, according to the 2000 Census. Plato is approximately 350 highway miles west of Henderson, Ky., the Chicago Consulting point for a single warehouse network. This demonstrates how transit time comes into play when serving that widely dispersed population.

The most populous cities include:

Based on the Chicago Consulting data and the Census data, it's easy to adopt the common view that to serve the United States with a reasonable distribution network, you should maintain warehouses in Los Angeles, New York, Chicago, Dallas, and Atlanta. There is more to the site selection decision, however, than population and proximity.

The Boyd Company, a site selection consulting firm based in Princeton, N.J., compiled a cost analysis for warehouse/distribution center operations that takes into account geographically variable costs in more than 75 markets.

The model excludes management from labor costs because those salaries are typically not affected by geographic differences. The shipping cost element is based on serving a standard retail consumer market and reflects over-the-road shipments in truckload lots. The purpose of the model is not to provide an actual cost, but an equal cost comparison between markets.

The network of Los Angeles, New York, Chicago, Dallas, and Atlanta, using the BizCosts 450,000-square-foot warehouse for each, has an annual operating cost of slightly less than $90.4 million.

Swapping out some of these metro areas delivers considerable savings. Seeking a Midwest alternative to Chicago's $18 million annual operating cost, for example, a company might consider Pittsburgh ($15.5 million); Cleveland ($15.5 million); Columbus, Ohio ($14.7 million); or Indianapolis ($14 million), which all offer savings.

Some recent projects that could have gone to the heart of the New York/New Jersey market (where annual operating costs are $21.3 million) have been shifting to areas such as the Lehigh Valley in Pennsylvania ($16.1 million), in part because of land costs and availability.

Areas such as southern Nevada are currently developing because land is cheap and readily available, providing alternatives to congested and expensive areas near major ports, including Los Angeles/Long Beach. "We wouldn't have been able to touch those areas a few years ago because of the cost," says Boyd Company founder Jack Boyd.

Part of the interest in areas such as the Lehigh Valley is based on access to major ports from a reasonable distance. Another key factor is the availability of rail service from the port to the inland region. Imports and exports can move through the port quickly and easily, with lower costs for labor-intensive functions such as container loading and unloading.

The Panama Canal expansion has been a boon for inland locations along the East Coast. Interest is already high in the vicinity of ports that have developed favorable agreements with the Panama Canal authority.

Another factor that comes into play for newer warehouses is energy. With the rise of value-added services performed at the warehouse or distribution center, power needs have changed over the years. In addition, some systems in use are more sensitive. Energy costs and reliability, therefore, become an increasingly important part of the site selection decision. Right behind that is a sensitivity to environmental impact, which extends to power sources and other facets of warehouse operations.

Beyond the facility itself, sustainability issues affect entire networks. An optimized logistics network minimizes miles and, consequently, fuel consumption. This is not only an environmental issue and image builder for many companies, it is also increasingly a cost-control issue. Volatile fuel prices make it more important for companies to develop solutions that offer not only reduced miles, but also provide mode options such as increased use of rail and rail intermodal.

With the wide variety of major and minor factors to consider in a logistics site decision, the process can appear complex. In fact, it is just detailed. The details vary according to each supply chain's particular needs, and researching those areas is important to ensuring an efficient, responsive network.

The Boyd Company's BizCosts analysis of more than 75 targeted logistics sites reviews operating costs for a conventional 450,000-square-foot warehouse employing 150 non-exempt workers. The analysis weighs geographically variable costs such as energy, labor, land, and taxes. Here's how the most and least expensive markets compare in terms of annual operating costs. 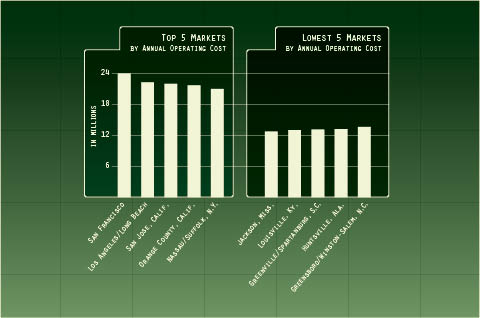 Add it Up: Logistics Facility Vacancy and Rent Trends

The second half of 2010 brought good news for the logistics market: Vacancy rates in the top 10 locations with Class A logistics facilities were less than 10 percent, according to a report by commercial real estate firm Grubb & Ellis, Santa Ana, Calif.

"The national vacancy rate, the best measure of the overall market state, continued its downward trend during the second half of 2010, ending the year at 12.8 percent," says the report. "For the property market, a decline in vacancies is a positive sign, representing a 50-basis-point improvement over the mid-year figure and a full point improvement over the vacancy recorded at the end of 2009."

"The current elevated vacancy levels are a result of new supply delivered prior to the recession, rather than negative demand," the report adds.

Here's more good news: rents have declined from peak levels prior to the start of the recession in December 2007. Eight of the top sites had asking rents of $5 per square foot or more in the second half of 2010.

"Asking net rents do not capture the entire depth of the decline," the report states. "In addition to declining rents, landlord concessions have risen considerably over the past two years, and one month of free rent per year of term for new tenants has become the norm. This practice alone results in an 8.3-percent decline in net effective rents that is not captured by the asking rents." That may be difficult for landlords, but can be a plus for tenants.

"Supply will remain constrained," says the report. "Currently, less than seven million square feet of new logistics buildings are under construction across the nation, of which only 270,000 square feet are vacant. Additional projects will be announced during the year, but 2011 will be the year with the least amount of new deliveries on record."

Looking ahead, "High demand and no new supply is a great combination for vacancies," the report notes. By the end of 2011, Grubb & Ellis expects the overall logistics vacancy rate to fall to about 11.5 percent. Rental rates will be the last to recover. Net effective rents could see an eight- to 10-percent increase by the end of 2011, but net asking rents will remain relatively flat over the year.