Shipping Out A Champion 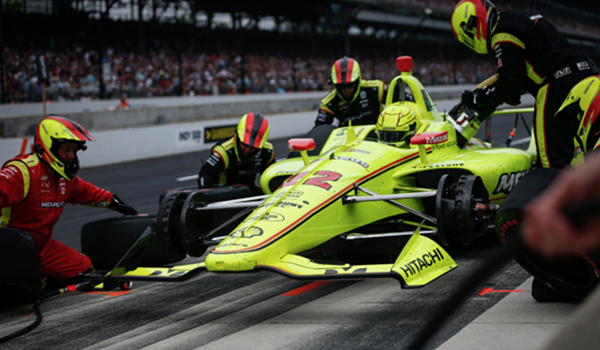 Just outside Indiana's capital city sits a township appropriately named Speedway, Indiana. Its population hovers at around 12,000 people, but that number increases 25-fold once a year—when it hosts approximately 300,000 spectators to "The Greatest Spectacle in Racing," the annual Indianapolis 500, at the Indianapolis Motor Speedway (IMS).

Unlike the one nearby that shares its name, the city around the IMS appears and disappears every May as Memorial Day Sunday, race day, grows nearer. The entire month is full of a variety of events that include not just the qualifying race for the 33 slots of the Indy 500, but also a Grand Prix race, a huge concert, and many other smaller events. The month-long stay at the site makes it one of the most logistically challenging races of the year for the race teams.

Welcome to the largest sporting facility in the world. The IMS is a 963-acre facility that includes not just massive grandstands and garage spaces for all the teams, but also several holes of a golf course, a Grand Prix racing circuit, and a solar farm.

Consider the scale of the place: Churchill Downs, Vatican City, the Roman Colosseum, the Taj Mahal, the White House, the Rose Bowl stadium, Liberty Island, and Yankee Stadium could all fit comfortably inside the 253-acre infield. 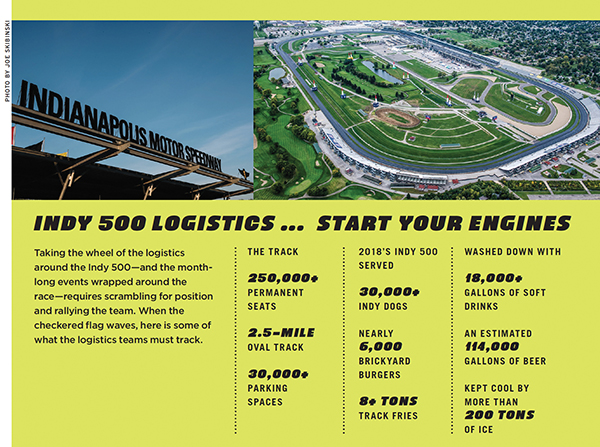 It takes a lot of shipments and distribution to keep so many fans happy, not only during the big race, but also through the month as the full set of events takes place (see box below). A race like this one also ramps up purchases at the popular onsite racing museum and all the merchandise tents and booths.

Indy 500 racers have one shot each year to compete in the race, but the planning starts long before race day—basically the week after the previous race is over. Race logistics are critical to the success of the drivers, ensuring that everything is in place for both qualifying and the race.

"Indy presents a few unique struggles because of the length of time we are there," says Chris Yoder, transportation director for Team Penske and a 15-year Penske veteran.

The first truck in 2019 left on April 26, a full month prior to the big race, containing all the supplies for move-in and setup in the garages. The garages can be like barren block shells, with just concrete floors, a few wooden benches, and doors, Yoder says.

The six people who go up with the first shipment start the transformation of that empty shell, outfitting the garage area not just for preparing the cars, but also to serve as a one-month home for the team.

The process includes laying down special flooring; setting up office and engineering areas; and providing livery, special cabinetry, and air conditioning. Longtime partner Snap-on Tools helps Team Penske set up the tools and equipment that support all the testing and adjustments that are a critical part of race preparations.

The garage isn't functional just for racing. It becomes a showplace for the many Team Penske fans and media outlets that get an opportunity to either glimpse it when the doors are open or, if they are part of a lucky few, actually go inside.

Team Penske owner Roger Penske sets up shop in a 53-foot trailer, named RP1, that serves as his office. A hospitality trailer looks like a transporter, but contains a kitchen for hosting VIPs and feeding Team Penske.

As one of the top-performing teams in Indy car racing, Team Penske also offers a merchandise trailer for the fans of the team and its drivers. Because the transport trailers, merchandise trailer, and RP1 trailer are the face of the Penske name, they must be maintained in top condition.

Once the basics were put in place, on Tuesday, May 7, 2019, Penske sent four race car transporters along with an additional support trailer carrying golf carts and a variety of other supporting supplies. Then it was time for the race teams to begin their work to get the cars ready for the IndyCar Grand Prix race on the IMS road course, followed by the qualifying race for the Indy 500.

Further complicating preparations, the team is one of the few that is not based in the Indianapolis area. The nine-hour driving distance causes struggles that can be magnified if any mistakes occur during preparation, particularly when the unknown or unexpected happens and requires shipments from Penske's Mooresville, North Carolina, headquarters.

So much time onsite and so many practice hours open up opportunities for damage and needed replacements. All trucks have a team of drivers to make sure they never have to stop.

Racing to the Winner's Circle

The 103rd running of the race saw Simon Pagenaud, driver for Team Penske, holding the prestigious Borg-Warner Trophy decorated with the faces of each winning driver, drinking the traditional victory milk, and donning the wreath worn by the winners. Pagenaud then said, "My team has been so supportive, giving me what I need. We didn't win by mistake."

Team Penske didn't just win, they also took two of the other top five positions, continuing an annual dominating performance at the Indy 500. In that same post-race interview, Pagenaud said, "When you are driving for Team Penske, it is expected of you to execute."

That expectation extends throughout Team Penske Racing, down to the people who make sure all the cars and supporting equipment arrive as needed at the site.

Planning for the next Indy 500 begins shortly after the transport team gets back from the race. The team gets together to discuss what went well, what challenges they faced, and how to do better the next year. But there isn't much time to celebrate the victory together; the team has to quickly turn the cars around for the next race the following weekend in Detroit, a race hosted and promoted by Penske Corporation and the Downtown Detroit Partnership.

After the race, it takes three round trips to get everything back to Mooresville. There are nine trucks at Indy and 17 truck drivers, including the four extra who fly in on Saturday of race weekend to provide fresh driving hours due to Hours of Service rules.

Four trucks that carry the cars take them out shortly after the race on Sunday to get them back to the home base on Monday and start preparing for the next race. By Tuesday evening, the cars have to be ready to roll to Detroit. After the Saturday and Sunday competitions in the Motor City, the return and preparation process is repeated to get the cars and team ready to head to Texas on Tuesday night for the next set of races.

Despite the back-to-back-to-back race weekends starting with the Indy 500, "the Indy race is the one we have to win," Yoder says. This year marked the team's 18th win, but although winning is the number-one goal for race teams, the bar is set a bit higher than what the average transportation director faces.

Efficient use of resources is still important and costs are closely managed, but the balance clearly tilts toward making sure trucks, drivers, and supplies are always available where and when they need to be. Drivers and crews always have to be supplied, so an "out of stock" situation cannot occur.

"We are a trucking company and logistics provider," says Yoder. "For my team, racing just happens to be our commodity."

Judging by the performance at the Indy 500, Penske's metrics are on track.