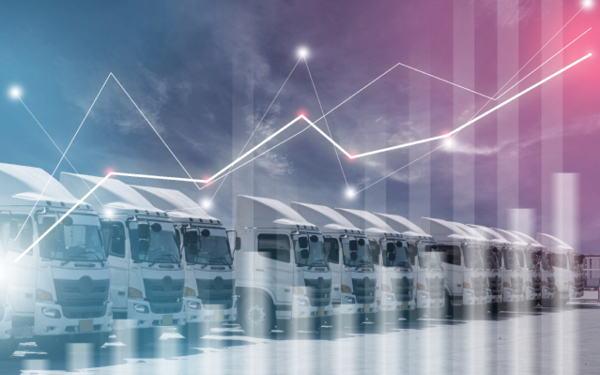 Better matching demand to supply and adjusting contracts, tendering, and invoice auditing strategies can help control transportation costs when rates are on the rise.

Coyote Logistics' research predicts an increase in spot market freight rates in 2020. UPS, Coyote's parent company, also announced in November 2019 that rates for its ground, air, and international services would increase by an average of 4.9%.

Even with published rates increasing, shippers can keep their direct transportation costs down by focusing on three areas: contractual relationships, day-to-day tendering, and invoice audits.

Like the financial market, the transportation market's capacity and rates are always in flux. And like savvy investors, shippers should prepare for these ups and downs by putting their eggs in more than one basket. That means companies should establish contract rates with a core set of carriers and also draw on the spot market.

"The same goes for the modes of transportation a company is using and the different contract structures, whether it's contract freight or dedicated freight," says Kevin Zweier, vice president of the transportation practice at Atlanta-based supply chain consultancy Chainalytics.

Companies that saw truckload rates decrease in 2018 may be tempted to contract with fewer carriers, select the lowest-cost providers, and assume that competition is unnecessary. That approach can backfire, however, when capacity tightens and rates go back up. "If you want those carriers to be there for you when things flip, you have to be there for them now and not be too opportunistic," Zweier says.

The cost of transportation involves more than the basic freight rate. Contracts often spell out additional fees called "accessorials," such as a fuel surcharge, an extra charge for delivering to residential areas, or a detention charge for holding a trailer too long.

When negotiating with parcel carriers, shippers often overlook accessorials and only focus on getting a big discount on the published rates. "When peeling back the layers, however, and identifying all the accessorial fees associated with the shipment-level detail, customers have the opportunity to save money by negotiating other items in addition to improving the discount percentage," Vernola says.

Parcel shippers can also negotiate the formula used to calculate the cost of shipping an individual package. That formula depends on the parcel's dimensions as well as its weight, and involves a carrier-specific factor called the "dimensional weight divisor."

The published dimensional weight divisor at UPS and FedEx is currently 139, but shippers can press for a more favorable number. "From the dimensional weight divisor to surcharge costs to delivery discounts—it's all completely negotiable," says Dave Sullivan, director of pricing and analytics at Shipware, a San Diego-based firm that helps companies optimize their parcel contracts.

The key to gaining leverage with these carriers is to offer business they want—ideally, large volumes of densely packed boxes shipping to densely populated areas—and be ready to defect to a competitor if you do not achieve favorable terms, Sullivan adds.

When the time comes to tender individual loads, shippers can save money by considering all options and using technology, such as a transportation management system (TMS), to make the best decisions.

Shippers that use the Cerasis Rater TMS, for example, can compare the cost of less-than-truckload (LTL) service with the cost of parcel service for a particular load. "When your load reaches about 175 pounds, it becomes interesting," says Adam Robinson, marketing manager at Cerasis in Eagan, Minnesota.

When shippers use LTL, the Cerasis Rater TMS classifies the load correctly based on dimensions and weight by integrating with an application called a dimensionalizer. This helps shippers provide accurate load information to carriers.

Without this safeguard, the carrier's invoice may contain a different classification than what the shipper assigned. "The carrier could say, 'That class is way off, and I know you charged your customers for the total cost of this product plus x for freight, but it actually costs you more,'" Robinson says.

A TMS can also save money by ensuring that shippers tender loads to the right carriers and use the right transportation modes. When a company relies on humans to make routing decisions, the results can be costly. For example, an employee unnecessarily shipping a package via air rather than ground service could end up costing $500 rather than $200, says Phil Murphy, senior vice president of MCG Logistics. A TMS prevents such problems by forcing adherence to the company's routing guide.

Although sticking to the guide is important, flexibility in tendering can also save money. Does your freight really need to hit the road during peak shipping times when tight capacity makes it hard to secure low rates?

"If you can have the load picked up earlier in the week, month, or quarter, odds are you would attract capacity differently than if you waited," says Al Reisman, executive vice president, specialized freight services at Landstar Transportation Logistics in Jacksonville, Florida.

Using a different mode—intermodal rather than truck, for example—can also save money. If you can't find a van, consider using a flatbed trailer. If a commodity needs to get somewhere in a hurry, consider reducing the volume of that commodity to avert trouble.

"Can you put two skids on an LTL truck and send them by an expedited service, and then manage the rest of the freight accordingly?" Reisman asks.

Third-party logistics providers can help shippers obtain lower rates by using LTL freight from several shippers to build full truckloads, or by using freight from more than one shipper to build continuous moves.

Real-time market intelligence can yield savings as well. In addition to populating a TMS with contract rates, it is important to pull in rate data from other sources, such as brokers and digital freight marketplaces.

Shippers should configure the TMS to choose carriers on the spot market when they offer the best options. "Sometimes companies set up their TMS so rigidly around the contract rates that it doesn't allow that to happen," Reisman says.

Whatever rules you set for tendering loads, the reporting functions in a TMS can help you enforce them. "You can run a report that asks, 'How often did we comply with standard operating procedures and, when we didn't, what did that cost us?'" says Robinson.

The software may reveal that instead of choosing the lowest-cost carrier, one employee in Houston gave loads to a friend, costing the company an extra $1,000 that quarter.

After managing the cost of future shipments, companies can save money by auditing their freight invoices or hiring a service to complete the task. For parcel shippers, one savings opportunity lies in identifying late deliveries.

Many parcel services guarantee that a package will arrive by a certain day or even a certain time. In theory, if a delivery is late, the shipper does not pay for it.

Unfortunately, parcel carriers often include language in their contracts that prohibits shippers from hiring firms to audit their invoices for late deliveries. "We've had a lot of success getting that language removed from contracts," Sullivan says.

An invoice may also contain unjustified accessorial charges. "Technology is so valuable because it can catch all that," says Murphy.

By paying careful attention to the details—in contract negotiations, tendering, and invoice auditing—and by thinking creatively about how they ship, companies can control transportation costs even when rates are on the rise.

After six consecutive quarters of steep decline, spot rates are heading back toward inflation, according to Coyote Logistics' Q4 2019 Market Update & Forecast.

Double down on trusted providers in your request for proposal. As the market continues to inflate, carriers will have a greater incentive to pursue spot opportunities.

Lean on relationships with high-service carriers. Pad your 2020 freight budget (if you can). You may be able to net another year of primary rate decreases, but do not expect your tender acceptance levels to perform at the same level—anticipate more unplanned exposure to the spot market.

Honor your commitments. To maintain your carrier-of-choice strategy, you may need to forego some profitable spot opportunities. With the anticipated rise in demand, be strategic with who and what you commit to for 2020.

Prioritize strategic business relationships. Work closely with your premium shipping partners that have kept your trucks loaded during the past year. Develop a plan to help them mitigate the effects of market fluctuation. Standing by them now will help you in the next cycle turn.

Use 2017 as a proxy. Coyote Logistics expects 2020 to feel a lot more like 2017 than this past year. As you build out your strategy, leverage your historical supply chain data from 2017 to get a more realistic comparison.

Stick with shipper and carrier of choice strategies. Don't try to time the market. Play the long game. Be transparent and share risk with reliable supply chain partners.