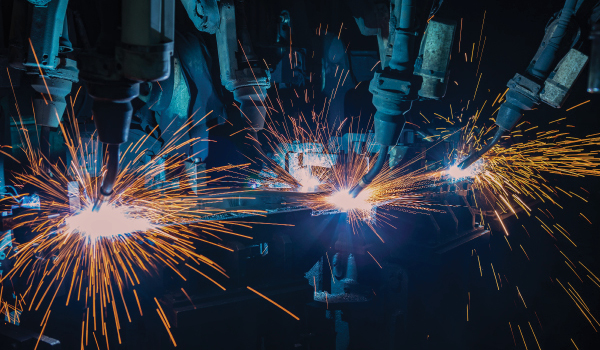 With one in every six jobs now tied to manufacturing, American-made products are making a profound comeback. Industry 4.0 innovations—3D printing, robotics, big data, and the Industrial Internet of Things—are changing the fortunes of U.S. manufacturing and its workers, with dramatic impact on the domestic supply chain.

On the campaign trail, candidate Trump issued a challenge—if not a mandate—that the United States should restore its manufacturing base in the Rust Belt and across America. Candidate Trump spoke adamantly against American industry's trend toward outsourcing, and offshoring manufacturing and supply chain functions. And while many companies still consider outsourcing a strategic operating model, manufacturing is making a pronounced comeback in America.

In fact, in the past three years, 800,000 new manufacturing employees have been hired across America, according to the National Association of Manufacturers (NAM). Further, 2016 marked the first time since the 1970s that the U.S. economy's manufacturing sector produced a net positive gain in job growth, notes a Reshoring Trends Report by Chicago-based Reshoring Initiative. Today, manufacturing supports an estimated 17.2 million jobs in the United States, which equates to roughly one in six private sector employees, according to NAM.

The United States has gone from losing more than 200,000 manufacturing jobs annually at the onset of the millennium to adding 30,000 net new jobs in 2016, the Reshoring Report shows. Several trends—including double-digit annual wage increases in China since 2010—have played into the resurgence of American-produced products.

To highlight the conventional, political, and academic wisdom that the United States can exist as a service economy alone, the Trump tax cuts and deregulation, combined with a boost in domestic energy production, give cover for many manufacturers to reshore.

expanding the Automotive base

Since the American Industrial Revolution, automotive production has been synonymous with U.S. manufacturing. And the automotive sector continues to be a catalyst for North America's manufacturing resurgence.

"The heavy-duty truck, at least in Chrysler's case, was moved to Mexico in 2008," Sergio Marchionne, CEO of Fiat Chrysler recently told CNBC. "Ninety percent-plus of what gets produced out of Mexico gets sold in the United States. This notion of making a car offshore that is sold nearly 100 percent in the United States is a bit bizarre. It should have never been moved.

"Repatriation of the heavy-duty Ram was owed," he says. "We had to correct the mistake of 2008.

"We are working in an environment that is a lot more beneficial, that is much more pro-business than it has been in a long time," Marchionne says. "Tax reform is going to compensate for some of the cost differential in building the car here, as opposed to building it in Mexico."

South Carolina has captured its share of manufacturers in the automotive and second-tier verticals. In fact, the Palmetto state ranks at the top of Reshoring Initiatives' list of states with foreign investment and reshoring initiatives. Fueled by economic incentives, workforce training, job tax credits and tax exemptions on equipment, South Carolina is now home to more than 400 auto suppliers and manufacturers.

The increase in U.S. manufacturing activity is not just confined to the auto industry or certain geographic regions, however. "With the return in new home construction, manufacturers and suppliers have seen a significant jump in U.S.-manufactured building supplies, such as floorcovering," says Roy Bowen, president of the Georgia Manufacturers Association.

Surging Past the South

The surge in advanced manufacturing has expanded beyond selective southern states. In the Midwest, for example, material handling and automation integrator Bastian Systems will invest more than $8 million in a 90,000- square-foot manufacturing facility in Westfield, Indiana.

Even states not traditionally known for manufacturing are fueling the growth of America's manufacturing footprint. In Boca Raton, Florida, for instance, Europa Manufacturing is adding staff and capacity to its precision metal fabricating plant.

Certain states are moving from traditional sources of production to broaden their manufacturing reach. Michigan—traditionally known as an automotive epicenter—has diversified its manufacturing base and modified its state laws to spur new industrial investment. In fact, CNBC recently ranked Michigan as the most improved state to conduct business due to its efforts to simplify the corporate income tax and implement progressive right-to-work laws.

Surveys show that one of the greatest challenges limiting growth in the U.S. manufacturing sector is attracting skilled labor. This is partly due to educators who, in the past, steered students away from the trades. Thankfully, that has changed.

Since its inception in the mid-1970s, Georgia's Quick Start program has trained more than one million workers and implemented 6,500 projects in advanced manufacturing, biotech, automotive, and aerospace.

Similarly, Tennessee's Drive to 55 program aims to increase students with certifications and college degrees to 55 percent of the state's population.

South Carolina started ReadySC in 1961 as an industrial workforce training vehicle. Over the past 55 years, the state has trained 300,000 workers for more than 2,000 companies. South Carolina's latest manufacturing success is Heatworks, a tankless water heater producer that recently announced a facility expansion, creating 60 new manufacturing jobs in Mount Pleasant.

"Manufacturing companies are recruiting in high schools in an effort to show students and parents that manufacturing offers a great career," says Chuck Spangler of the South Carolina Manufacturing Extension Partnership. The state has partnered with its largest employers to fill the jobs gap in skilled labor careers tied to manufacturers.

As the United States balances its economic status as a service-based country with a revitalized manufacturing base, several trends are evolving. Technology, led by robotics, data exchange, and artificial intelligence, continues to influence the manufacturing renaissance. The future of U.S. manufacturing will be built on intelligent factories and facilities.

3DP has emerged as the new paradigm in manufacturing and will retool the global supply chain. Two-thirds of the industrial manufacturers polled in a joint PWC and Manufacturing Institute survey are already utilizing, or plan to implement, 3DP technology. A PWC report advises that educators should include 3DP training in similar fashion to training offered in the STEM fields.

Auto plants today use half the number of employees of traditional labor-intensive manufacturing facilities of three decades ago, shows a recent Reshoring Report. This trend has increased the need for human-machine interface and a skilled workforce that understands robotics and automation.

On the political front, a nationalist mindset—as advocated by the Trump administration—serves the purpose of protecting a country's borders, but, as critics say, simultaneously inhibits free trade and impacts output and the flow of products between countries. Many labor leaders and observers disagree, saying free trade should also be fair trade, with an emphasis on reciprocity to give closed offshore markets access to U.S. products, spurring more trade. U.S. manufacturing workers would then have a fighting chance to compete with offshore labor available to multinational companies for pennies on the dollar.

As the United States continues its manufacturing revival, producers must focus on global trade and expanding export markets—despite the perceived nationalist landscape.

With the emergence of 3D printing and a nearshoring mindset in America, how will the global supply chain be disrupted? The implementation of 3DP will substantially reduce the need to transport supplier parts to the manufacturer, greatly reducing shipping costs and transit time. As international free trade agreements such as NAFTA are under review, the global supply chain footprint could actually contract, rather than expand, under the Trump administration's nationalist policies.

Is the increase in manufacturing a temporary trend or a sustained surge in the U.S. economy? Manufacturing sector hiring in 2017 has been "better than expected with a 250-percent increase" over 2016's hiring pace, says Reshoring Initiative's Moser. He believes that hiring and capital investment trends will continue as long as Congress and the President stay focused on corporate tax reductions and regulatory reform.

However, Moser and other experts warn that a rapid resurgence in U.S. manufacturing could backfire.

A skilled labor shortage could ultimately slow the manufacturing revival. Identifying skilled workers to design and integrate 3D printing, data analytics, and robotics into the manufacturing process is projected to create a talent deficit, handicapping America's return to production preeminence.

Related Articles
Chainsaw Maker Massacres Supply Chain InefficienciesWhiskey, Bartender—and Make it Quick!Tapping the Power of Performance ManagementTrends—January 2016What Effect Will 3D Printing Have on Logistics and SCM?Turn to Technology to Attract the Next Generation of WorkersTransparency to Efficiency: How IoT Can Increase the Productivity of Your Transportation (Sponsored)Carrier Network Plants Seeds of Delivery EfficiencyMost Mid-Market Supply Chains Are Under-ServedMastering Logistics Complexity: How to Take Control With Technology More related articles...