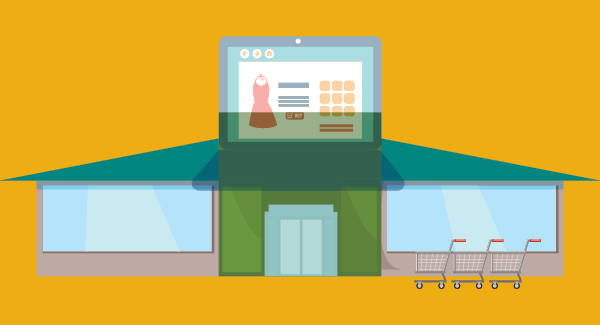 Brick-and-mortar and digital shopping are merging in the minds of many consumers. Of the 165 million Americans who did some kind of shopping from Thanksgiving Day through Cyber Monday in 2018, 89 million shopped both online and in stores. That's nearly 40 percent more than the number who channel-hopped that way in 2017.

Increasingly, consumers want to be able to buy and receive products in whatever combination of methods they find most convenient.

"The customer journey today is very different than it was 10 years ago," says Kent Zimmerman, vice president, digital, at retailer Shoe Carnival in Evansville, Indiana. Not only do customers want options that blur the boundary between brick-and-mortar and e-commerce, but they also want access to the same product assortment however they shop.

"We don't want the customer experience online to conflict with what customers expect when they go into the store," he says.

Changing customer expectations—fostered by innovations from companies such as Amazon and Walmart—are forcing traditional retailers to keep re-examining how they fulfill customer orders, and to adjust the supply chain infrastructure accordingly, including the role local stores play.

One critical option in this new landscape is buy online, pick up in store (BOPIS). According to a 2018 survey of 3,000 U.S. consumers conducted by Kibo, which provides technology for omnichannel commerce, 67 percent of participants had used that option in the previous six months.

If an item is in stock locally, a customer who chooses BOPIS can take possession right away. If the retailer ships it from a warehouse to the store, the company will probably waive the shipping charge. Retailers like BOPIS because it gets consumers into physical stores, where they might decide to make additional purchases.

Omnichannel technology can help encourage those add-on sales by giving store associates access to a customer's complete purchasing and browsing history. "Retailers get a holistic view of who this person is and what they like, and can make suggestions based on that information," says Danielle Roberts, senior product manager at Kibo in Dallas.

One challenge retailers face when they offer BOPIS (or its cousin, reserve online, pay in store) is inventory accuracy. A retailer that lacks a clear view of product available in all of its stores, at all times, risks disappointing customers who choose BOPIS. "The last thing you want is for a customer to walk into the store and have an associate tell them, 'Just kidding. We don't actually have that product,'" Roberts says.

One hardware and home improvement retailer that uses Kibo's software lets customers indicate online that they want products, such as grills, pre-assembled before pickup.

A store may use an interface between its order management system and its point-of-sale (POS) system to speed and smooth in-store pickups, or other processes that use store inventory.

"We provide an application that notifies stores about orders that need to be picked from local inventory and put aside for collection in-store, or to pull out all the documentation to ship it from the store," says Nick McLean, chief executive officer of OrderDynamics, a vendor of retail order management technology, based in Richmond Hill, Ontario.

As more retailers start using stores as pickup points, many also use those local shops as e-commerce fulfillment centers. When a retailer ships an order from a store that's close to the customer, the customer gets the order faster, and the retailer pays less for transportation.

But ship-from-store also poses some operational challenges, especially for boutique or specialty retailers. "Typically, they have very small back rooms that are not set up to efficiently pick, pack, and ship," says Sean McCartney, executive vice president, operations services at Radial, an omnichannel technology and operations firm based in King of Prussia, Pennsylvania.

Even large retailers may run into trouble. McCartney cites one client that dialed back on its ship-from-store strategy after hiccups in the process prompted customer complaints about inaccurate orders.

A fulfillment center has systems in place to ensure that associates pick and pack the correct items. "Imagine a store with gondolas of merchandise," McCartney says. "It's typically not as structured for associates to find and ship items."

While some store associates take on duties that once belonged to the fulfillment center, others double as delivery drivers. Walmart has been using store employees to deliver e-commerce orders during their end-of-shift commutes. This new duty is strictly voluntary, Walmart said when it announced the program in 2017. Associates decide how many packages they will deliver, set size and weight limits, and choose the days when they will make deliveries.

This model makes sense for a retailer the size of Walmart, which has stores close to a major portion of the U.S. population. "If the customer doesn't want to pick the order up, the retailer doesn't have to call UPS or another partner to come to the store and deliver it," says Paul Myerson, a management and decision sciences instructor at Monmouth University, New Jersey, and author of several books on lean supply chains.

Trying on Ship From Store

Some retailers find the benefits of ship-from-store so compelling, they've made that model the centerpiece of their e-commerce strategies. Shoe Carnival, which operates more than 400 stores, is one example.

Shoe Carnival replenishes its stores from its own distribution center (DC). Before 2014, it also shipped product from the DC to a third-party logistics (3PL) provider, which fulfilled e-commerce orders. "This was not very efficient," says Zimmerman. Also, since the 3PL had the capacity to hold and ship only so much inventory, this process limited the number of SKUs Shoe Carnival could offer online.

The retailer chose this strategy in part so it could offer a much broader assortment of products online. "We went from 90,000 units on any given day to millions," Zimmerman says.

With access to the inventory in every store, the company can now offer complete size runs through its website. Also, with the order management system in place, the retailer has laid the groundwork for adding ship-to-store and BOPIS options in the future.

Shoe Carnival has set several business rules in the software to determine which store fulfills a given order. "First, we try to find stores that can ship an order complete," Zimmerman says. Within that group, the software then looks for stores near the customer. But it doesn't always choose the closest store. "The larger stores will always have the most inventory and will always bubble up to the top if we didn't put some controls in place to make sure we don't hit the same stores over and over," he adds.

Princess Auto, a chain based in Winnipeg, Manitoba, that sells tools, equipment, and other items for do-it-yourselfers, has shifted 100 percent of its e-commerce fulfillment to its retail stores.

Using an order management system from OrderDynamics, the retailer has been phasing stores into its e-commerce operation since late 2017, with plans to include all 46 locations across Canada by early 2019. It closed its e-commerce fulfillment center in Milton, Ontario, in 2018, transferring its employees to other facilities.

The company (founded in 1933 as a vendor of used auto parts on Princess Street in Winnipeg) used to fulfill all e-commerce orders from Milton. That caused several problems, says Dave Matthes, vice president, marketing. The facility kept running out of product, disappointing e-commerce customers who couldn't add items they wanted to their carts—even though the same items were available at stores nearby.

The fulfillment team often fell behind in its work, making it hard to promise an accurate delivery date. And shipping times varied wildly. Customers in parts of Ontario and Quebec close to Milton got exceptional service. "They would receive orders the next day without any extra cost," Matthes says. But for customers in western Canada, shipping could take up to 12 days.

A customer could call a local store to place an order and have it shipped from there. But since the store and e-commerce operations were entirely separate, a customer with a question about an order couldn't get an answer from the company's website or call center; they had to call the local store. Customers found that confusing, Matthes says.

Ship-from-store has eliminated all those problems. E-commerce customers now have access to all inventory available in retail locations. The conversion rate—the ratio of sales to website visits—has increased as a result. Shipping times are more consistent, and orders go out faster, since the stores are open many more hours per week than the fulfillment center was. "Our capability to offer better service to customers has skyrocketed," Matthes says.

Like Shoe Carnival and Princess Auto, many other companies are re-engineering their processes to better consolidate e-commerce and store operations.

In the past, retailers often set up their brick-and-mortar and e-commerce channels as separate universes, each with its own way of capturing orders and its own inventory. "Now everybody has to represent the brand as a single entity," says McLean. "It's all about omnichannel." Retailers need to pull all their inventory into a single pool and use it to the greatest advantage.

While that inventory may sit in one digital pool, when it comes time to pack and ship an order, a retailer still needs to consider the physical location of its products in multiple stores and, perhaps, in one or more warehouses. An omnichannel retailer must be able to optimize fulfillment, drawing product from the locations that make the best sense.

One obvious choice is to fulfill an order from the location nearest the customer. But when retailers configure the Radial Order Management (ROM) system, fast fulfillment isn't their only consideration, says McCartney. Cost is important, too—not just the cost of transportation, but also the cost of letting merchandise sit in a store so long it goes on markdown.

For example, if a sweater is languishing in a store 75 miles from an online customer who wants to buy it, it might be more profitable to ship that sweater than to pick one from a warehouse 30 miles from the customer's home. "Retailers would leverage our technology to help minimize the markdown impact for the inventory that's currently residing in hundreds or thousands of store in the network," McCartney says.

Another important consideration arises when a customer orders several items at once, and they're not all available in the same building.

Consider the case of a retailer that receives an order for three pairs of shoes. "They may have one pair available in that size only in the warehouse, another in a store, and the third in the store they're going to fulfill from," says McLean. If those shoes arrived at the consumer's home in three separate packages, on three different days, the consumer would find that inconvenient, and the retailer would rack up excess shipping charges.

To avoid that problem, OrderDynamics' software would arrange for the retailer to transfer the other two pairs to the store chosen to serve as the fulfillment point, do a quality check, and then ship them in a single package.

Several other novel omnichannel retail strategies have emerged in the past few years. One is the use of showrooms, where customers check out products before placing orders online. Another is collaboration between Amazon and stores on college campuses, which have replaced shelves of textbooks with fulfillment lockers. "A student orders a book, it shows up in the locker the next day, and the school gets a cut," Myerson says.

Without a doubt, retailers and customers can expect even more innovations as retailers refine their omnichannel strategies.