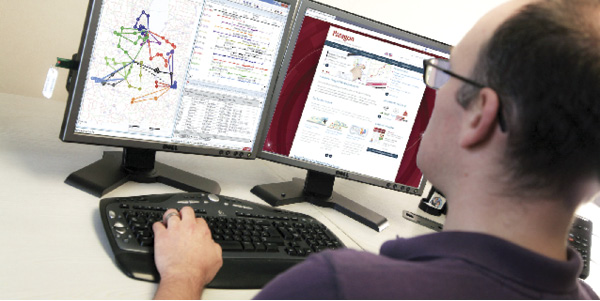 George's Inc. is a classic American success story. The company started as a general store in tiny Brush Creek, Ark., west of Springdale. In the 1920s, founder C.L. George began hauling live poultry to customers in Kansas City, St. Louis, and Chicago, laying the foundation for what would become one of the country's leading poultry producers.

Nearly one century later, the fourth generation of the George family still leads the privately held company. The thriving operation spans multiple states, and employs more than 4,700 workers. George's processes more than five million chickens weekly, and is a major supplier to restaurant chains such as KFC and Popeye's.

George's DSD accounts presented a logistics challenge, sometimes demanding up to 35 stops for a single truck.

"We entered the DSD orders into our business system, but then had to manually create routes," says Jeff Overstreet, director of transportation for George's. "Because this was a complex, labor-intensive, and time-consuming activity, I began to search for a software solution that would assign orders to the best possible routes based on destination, driver hours of service, and other factors."

After intensive research and evaluation, Overstreet chose a route planning solution by Frisco, Texas-based Paragon Software Systems. "The selection came down to four or five competitors, but the determining factor was Paragon's ability to integrate with our existing enterprise system," notes Overstreet. "The software is not an off-the-shelf commercial solution, but one of our own design."

It also updates daily key performance indicators such as average cost per delivery; highlights any under-utilized routes that need to be improved; and provides warnings for any overloaded vehicles, over-worked drivers, or late customer deliveries.

Before George's implemented the system, sales and transportation were not integrated. The sales office and dispatch function were in separate locations, so every order placed was printed in the dispatch office.

"For example, the dispatcher picked up the printed orders, saw two deliveries for New Hampshire and one for Connecticut, then assigned those to a route together in the enterprise system," says Overstreet.

The system allows George's to quickly develop routes, eliminate manual planning and scheduling, and ensure that mileage does not spiral out of control as workload increases. In fact, George's has been able to add more deliveries without adding more miles.

"Prior to implementing the Paragon system, we didn't have a way to integrate our transportation function into our operating system," notes Overstreet. "We've been able to automate transportation to our advantage."

When George's first applied the software solution to its DSD business, the company operated 11 routes from the Virginia facility. After running orders through the Paragon solution, the number dropped to nine. "That represents significant savings in capital equipment and labor costs," says Overstreet.

The company gained further efficiencies. First, since implementing Paragon's RMS, George's has cut its fuel bill for DSD operations by more than $30,000 annually. The savings result from a five-percent reduction in road miles, made possible by using Paragon's map-based transportation optimization capabilities.

Saving dispatchers six hours per week was a third benefit. They now spend this time investigating backhaul and other business opportunities, instead of performing data entry and dispatch administration tasks.

For a George's customer who is down to four cases of chicken and requires more to serve its lunch patrons, the need to know immediately when the product will arrive is paramount. As any retail operation can attest, calling the driver doesn't always yield accurate information. George's found a solution in Paragon's Fleet Controller.

Fleet Controller provides the link between real-time truck tracking and Paragon's RMS. It enables George's to:

Fleet Controller includes standard interfaces to many leading truck tracking systems. Real-time tracking data—including GPS locations and ignition settings—links to the system, which uses advanced matching logic to continually assess each truck's location in relation to the planned schedule, and update the timing for the remainder of its route.

"Fleet Controller plays a key role in supporting customer satisfaction in our DSD operations," says Overstreet. "It is integrated with our onboard communications systems to provide real-time shipment visibility. We and our customers know where a truck is at any given time."

The software also provides a range of fleet management reports, and plan-versus-actual summaries. George's can discover which routes incurred the highest excess mileage or driver hours, and immediately debrief the driver. It also has visibility into which customer sites regularly keep drivers waiting, resulting in added costs and late deliveries for other customers.

For George's, an important part of the Paragon solution is its flexibility. If the company wants to deviate from the standard package, Paragon can easily adapt the software and implement the desired functions.

"Paragon's programming group has been a huge factor in the solution's success over time," says Overstreet. "We perform functions other poultry suppliers don't, such as filling small orders, but this makes our overall process variable. We needed a tool that can organize the logistics pieces."

For example, because the company sells fresh poultry products, every day has to be a "sell out." George's DSD operation doesn't have the luxury of keeping inventory on hand, or selling product several weeks out and storing it. Product has to move.

"We were having an issue with spot sales on loads—product that had to move that day," says Overstreet. "Now, our sales force can go into Paragon, draw a 50- or 100-mile radius around a truck that is half full, then identify buyers within the route who can purchase product that needs to be sold. We're not only optimizing transportation with this system, but also maximizing product movement."

New mapping enhancements in the latest version of the software provide a user interface that automatically displays information on a map for fast, accurate, and familiar visual references for drivers and dispatchers.

George's success with Paragon for its DSD business in its eastern U.S. operations motivated the company to expand its usage to operations in the western region, with a slightly different approach. The company uses fixed routing in the East, where it owns the fleet and employs drivers. In the West, however, it uses dynamic routing, because outside carriers transport 95 percent of its shipments in that region.

Paragon's Integrated Fleets software adds another level of sophistication to George's multi-site transport and logistics optimization capabilities. The tool enables managers to treat vehicles and drivers at multiple sites as a single integrated transportation resource, so movements from different depots can be combined into efficient routes that reduce overall empty running.

The Integrated Fleets software is suitable for more complex transportation operations, such as those involving multiple DCs with different product ranges, or where a company wants to combine pickups and deliveries on the same truck routes.

For example, dispatchers can schedule a truck from one DC to make some customer deliveries, then pick up its next load from another warehouse or DC for delivery on the way back to its base. This creates route schedules with efficient backhauls that reduce empty mileage, improve productivity, and lower total transportation costs.

"Eliminating miles and adding payload delivers a huge benefit," says Overstreet. As a result, costs drop in every shipping category, which leads to financial and service-level gains.

As George's looks to further expand its use of transportation optimization software, its immediate goals are developing new customized reports and setting up its database to better analyze rates and carrier performance.

"It's important to know your business requirements," Overstreet concludes. "Then ensure that technology is tailored to your operations, and helps you continue to improve your business and methods."