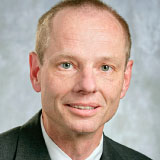 Freight railroads represent a critical supply chain link for agricultural product shippers. It's not enough that railroads haul a ton of freight nearly 500 miles on a single gallon of diesel fuel—the equivalent of a standard mid-sized car getting 200 miles per gallon.

To provide agricultural product shippers with the best value and service, freight railroads need to increase capacity while delivering reliable, consistent service to an industry with a high level of seasonal, geographic, and product variability.

The rail industry, particularly across the Midwest and western portions of the United States, has responded to these requirements in numerous ways, including:

Capacity. Many industries continue to act cautiously in today's volatile economy, making only minimal capital investments. In contrast, freight rail has invested approximately $10 billion annually back into the rail network, despite the worst recession in a generation.

In fact, railroads invested a record $10.7 billion in 2010 and are projected to spend $12 billion in 2011. Those are private dollars supporting our country's transportation infrastructure, with no taxpayer burden.

Freight railroads moved nearly 1.15 million carloads of grain in 2010, almost an 11-percent gain over 2009, reflecting strong overseas demand for high-quality, competitively priced U.S. grain. U.S. wheat exports in 2011 are projected to hit their highest levels since 1992, according to the U.S. Department of Agriculture.

Reliable service. Freight railroads continue to develop a large shuttle-train network that provides shippers with cost-effective access to all major domestic and export markets. These grain train shuttles are dedicated sets of 75 to 110 covered hopper cars for loading whole grains that move as a unit from one origin to one destination.

Throughout the Midwest, West, and Mexico, where a large number of grains are produced and consumed, railroads have helped develop about 400 shuttle service locations. This efficient service offering can more than double the productivity of covered hoppers for grain.

U.S. railroads played a key role in supporting grain export increases in 2010 and early 2011, when crop failures in Russia and Eastern Europe increased U.S. wheat exports by 46 percent. Approximately 69 percent of the total U.S. wheat exported out of the Gulf moved there by rail, 31 percent by barge.

In July 2010, The Economist cited America's freight rail network as one of the unsung transportation successes of the past 30 years, universally recognized as the best in the world. Ongoing investments in infrastructure, training, equipment, and technology represent the railroads' commitment to providing the safest and most efficient service to America's agricultural industry.