Puerto Rico: Go with the Flow 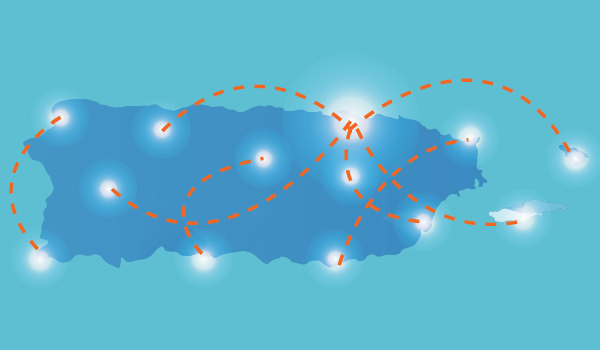 The "Made in America" initiative, a highly skilled workforce, and transshipment capabilities are beckoning shippers to take advantage of the flow of commerce to the island—a sometimes-overlooked domestic market for U.S. manufacturers.

It has been said there are no harmless misconceptions. Puerto Ricans—U.S. citizens all—can attest to that statement when it comes to their island home. For manufacturers and shippers, the most harmful misconceptions about Puerto Rico may cause them to ignore a potentially important market for their products.

Officially an unincorporated territory of the United States, the Commonwealth of Puerto Rico enjoys free flow of travel and goods with all 50 U.S. states, not unlike that between the states themselves.

"It's no different than shipping products from Atlanta to Miami," says Gail Nolan, chief strategy officer for Invest Puerto Rico, the island's marketing and business-development arm.

Despite Puerto Rico's status as a U.S. territory, many Americans continue to mistakenly view the area as a foreign country and therefore falsely believe it is subject to border-crossing restrictions that could stifle trade. "It is a huge misconception," Nolan says. "It is domestic commerce, not trade."

Part of its mission is to convey the attitude of U.S. Customs and Border Protection, an agency of the Department of Homeland Security, which treats commerce on the island of Puerto Rico as it does in any other U.S. port, considering any products from the mainland to be domestic. As such, goods receive no additional inspection.

The island is "a connected hub" with logistics assets that are not so much individual as they are collective, says Nolan.

Puerto Rico has assets that correspond with or exceed other geographical areas of its size—including nine regional airports and three international airports, and a highway system connecting internally with an extensive temperature-managed warehouse system.

Likewise, shippers would be smart to explore the advantages of Puerto Rico's Foreign Trade Zone, the largest noncontiguous FTZ in the United States. The FTZ consists of three ports—San Juan, Mayaguez, and Ponce.

"There are also external marine highways so goods can travel around the island both internally and externally in very effective ways," Nolan says. "The density of logistics capabilities is impressive."

For all its logistics advantages, Puerto Rico is not merely standing in place, and savvy manufacturers and logistics professionals are taking notice.

In January 2021, President Biden signed an executive order to support American manufacturers, businesses, and workers. Referred to as the Made in America Executive Order, it directs agencies to utilize the Manufacturing Extension Partnership—a national network in all 50 states and Puerto Rico that supports small and mid-size manufacturers—to help agencies connect with new domestic suppliers who can make the products they need while employing America's workers.

The Made in America order will benefit Puerto Rico specifically because of the territory's access to low-cost commodity manufacturing in regions covered by the Caribbean Basin Initiative and CAFTA, a NAFTA-style deal with five Central American nations as well as the Dominican Republic.

The order is expected to provide Puerto Rico a boost by providing increased "American-made" labeling for products coming from the island.

Once precise guidelines are established, manufacturers may wish to reevaluate the cost of goods for every component part of their products to determine whether Puerto Rico presents viable options. Invest Puerto Rico can serve as a partner in navigating that process, notes Nolan.

"We align companies with our experts to work through what makes sense in terms of using our location and proximity to the Caribbean Basin and some of those other labor pools, while still being mindful of the Made in USA label," she says.

Meanwhile, cabotage constraints are being eased, Nolan says. Cabotage refers to trade or transport in coastal waters or airspace or between two points within a country.

"Right now, we're very excited," Nolan says. "We have a transshipment waiver that opens up opportunities on the island for goods and passengers to offload and reload on the island of Puerto Rico."

Advocates for Puerto Rico hope to work with the new Administration in Washington to extend the transshipment waiver and further release cabotage restrictions.

"The other piece that's important to us is the Jones Act," Nolan adds. The Jones Act is a federal law that regulates maritime commerce in the United States. It requires goods shipped between U.S. ports to be transported on ships that are built, owned, and operated by U.S. citizens or permanent residents.

"The Jones Act requires some navigation in terms of how entities look at the origin and destination of goods, and incorporating Puerto Rico into that," Nolan says.

Currently, when goods are shipped from manufacturers in the states to Puerto Rico, they require an extra step: Electronic Export Information documentation specifying what the cargo is, similar to the process needed for exports.

While the step is more of an inconvenience than an obstacle, Nolan says, Invest Puerto Rico is working to eliminate the extra paperwork step. "All indicators are that it doesn't serve a purpose," she says.

An emerging hub for business opportunity, the island already is home to companies from around the world that are maximizing their growth opportunities by venturing into diverse industries and relying on Puerto Rico's skilled workforce.

"The talent in Puerto Rico is exceptional," Nolan says. "It's number six globally in concentration of scientists and engineers, it has more than eight times the concentration of experts and personnel in the pharmaceutical industry, more than five times in the medical device industry, and almost four times the number of experts in the shipping industry. All this talent adds opportunity."

Invest Puerto Rico's goal is to align, facilitate, and enhance the promotion efforts of private, public, and non-profit organizations that historically have supported government initiatives and drive economic development within their sectors.

The organization also provides services to help businesses establish operations on the island and helps them link with local companies to acquire goods and services in collaboration with the Department of Economic Development and Commerce, other government agencies, trade organizations, and industry partners.

Although only 100 miles long and 35 miles wide, Puerto Rico is something of a powerhouse for certain products, most notably pharmaceuticals.

In April 2020, the U.S. Department of Transportation (DOT) granted a waiver for air cargo and passenger transfer services for Puerto Rico's three international airports—Luis Muñoz Marín, commonly known as San Juan International Airport (SJU), located in the municipality of Carolina on the northeast of the island; Rafael Hernandez Airport located in the municipality of Aguadilla on the island's west coast; and Mercedita/Ponce International Airport in the south, three miles from the central business district of Ponce.

The DOT waiver allows foreign and domestic flights that stop in Puerto Rico to transfer cargo or passengers to another flight, allowing companies to cut costs, reduce shipping times, and increase profit margins.

This advantage blends well with the island's geographic location along high-growth trade routes between Europe and the Americas. The island already ships to more than 83 destinations worldwide and is a global leader in transportation and logistics. It has the talent, R&D, and infrastructure to support specialties such as cold chain and climate-controlled shipping, which is essential for life-critical manufacturing.

Meanwhile, Puerto Rico has secured a position in a four-location network for 5G technology development. "I call it the north-south-east and west network," Nolan says.

In addition to Puerto Rico, the network consists of Texas A&M University, Purdue University in Indiana, and the University of Hawaii. It is connected through the National Spectrum Consortium with funding from the Department of Defense.

"Basically, it creates a boundary around the U.S. border and each different node will be connected to a high-density computational core at Texas A&M," Nolan says. Each area will have a research focus, with Puerto Rico concentrating on manufacturing and logistics.

"We will be the national center for evaluating efficiency around logistics as it becomes very data dense," Nolan says. "That's an important differentiator for Puerto Rico moving forward."

It's one of many differentiators that should reinforce Puerto Rico's rightful place in the U.S. logistics landscape.

Related Articles
Global Logistics—December 2014Trends—October 2014Trends—June 2014Global—February 2014Scrutinizing Supply Chain SecurityMemphis: America’s Aerotropolis
Port of Long Beach Loads Up on BusinessBuddy, Can You Spare a Can?Do you expect a resurgence in reshoring to the United States? Why or why not?3 Underreported Trends That Will Accelerate Reshoring More related articles...