Ports-to-Plains Corridor: A Pipeline for Progress

Cutting a 2,300-mile swath through rural North America, the Ports-to-Plains Corridor represents an economic pipeline from the U.S.-Mexico border to the northern border with Canada.

Counties, cities, and towns located within the corridor—which comprises Colorado, Kansas, Montana, Nebraska, New Mexico, Oklahoma, North Dakota, South Dakota, Texas, and Wyoming—depend on the region's transportation infrastructure for both access to, and export of, a vast array of goods and services.

They also rely on the Ports-to-Plains Alliance, a bipartisan nonprofit organization that promotes policy, trade, and investment priorities for the region.

"Sometimes communities in rural areas get overlooked," says Michael Reeves, president of the Ports-to-Plains Alliance. "But our group works at the local level to ensure cities and towns are doing all they can do to attract industry."

The organization serves as the collective voice of the region, fighting for highway-improvement funding, and marketing the region as a logistics lane linking the central United States' energy and agriculture industries with Canada and Mexico.

Over the past decade, the Ports-to-Plains Alliance has raised more than $1 billion in federal funding for road improvements in the region. The alliance collaborates with industry partners, federal and state government officials, and their counterparts in Canada and Mexico to deliver the necessary infrastructure, food, and fuel to secure a strong quality of life in America's cities.

At the same time, the organization embraces America's new energy economy, and seeks to capitalize on wind power, biofuels, and other innovation sectors to renew the rural heartland.

Given the size and weight of wind turbines, their manufacturers have good reason to produce and erect them along the Ports-to-Plains Corridor. "There is a great incentive for turbine manufacturers to locate near the best wind," Reeves says. "And we are in the sweet spot."

The corridor serves eight of the United States' top 10 installed wind-generation states, generating more than 6,000 megawatts, or nearly 78 percent of total U.S. wind energy. A single wind tower requires 126 trucks for major parts, including the crane, concrete, or rebar. One planned wind farm in West Texas will install more than 2,600 towers, and put more than 21,000 trucks on the highways serving the site.

Developing the burgeoning renewable energy industry is critical to national security and economic growth. The energy generated in the corridor feeds into the national grid, benefiting all Americans. In addition to wind energy, the Ports-to-Plains Corridor serves 28 percent of the nation's ethanol-refining capacity, and five of the top six natural-gas-producing states. 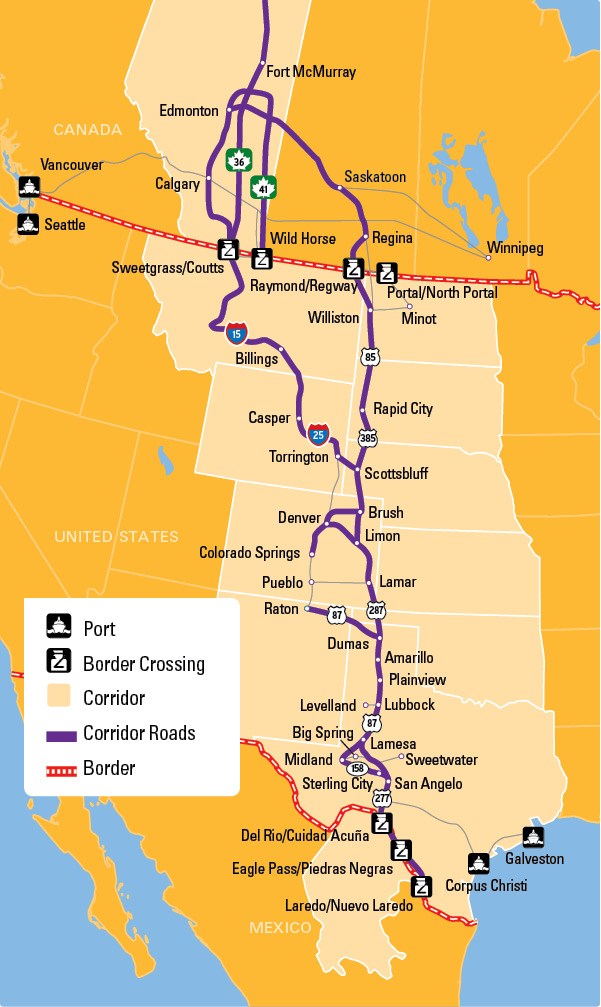 Traditional energy industries are also well-represented in the region. The corridor serves seven of the top 10 oil-producing states.

Agriculture is another vital industry in the Ports-to-Plains region. The corridor runs through four of the top eight farm states that produce $23 billion of agricultural goods, and 19.5 percent of all U.S. agriculture products. The food produced in this region is destined for cities and towns throughout the nation, and truck movements along the corridor are a critical part of the agricultural distribution network.

One of the sweetest spots along the Ports-to-Plains Corridor, Big Spring, the county seat of Howard County, is located in the Panhandle Plains region of West Texas at the crossroads of U.S. Interstate Highway 20, and State Highways 87, 350, and 176.

"We call ourselves the Crossroads of West Texas," Wegman says.

Big Spring's unique topography is a mixture of wide-open plains mixed with the convergence of the northern limit of the Edwards Plateau and the southernmost hills of the Caprock region. The city maintains a diverse and varied economy. Oil and gas production became a major economic force in the area in the early 1900s, and continues today. The economy has grown to include refining, manufacturing, wind-energy production, transportation, and government and healthcare services.

Companies are drawn to the community because of its friendly environment for companies and residents alike. With a population of 27,000, Big Spring has the flavor of a small town with the amenities of a big city.

Moreover, it offers extraordinary advantages for logistics providers, including Big Spring McMahon-Wrinkle Airport and Industrial Park. The former home of Webb Air Force Base, the facility now serves the community and region as a top-notch airpark with an 8,800-foot newly upgraded runway that can accommodate large aircraft as well as smaller planes.

"We are currently developing a rail terminal on the east side of town, which will create more warehousing and distribution opportunities, and strengthen the Ports-to-Plains Corridor," Wegman says.

A soon-to-be-built relief around the west side near the airpark will provide additional opportunities for commercial development and utilization of the airpark.

"A lot of people may not have heard of the Ports-to-Plains Corridor," says John Osborne, president and CEO of the Lubbock Economic Development Alliance (LEDA) and its partner organization, Market Lubbock Inc. To change that, Osborne and his team are committed to working with members of both organizations to promote the area's business benefits.

"Cooperation is a powerful tool to develop the corridor to its fullest potential," says Chris Allen, director of the Foreign Trade Zone for the LEDA.

The extraordinary level of collaboration and cooperation inherent in the Ports-to-Plains Alliance has its roots in the history of the Plains region. The area's pioneers were compelled to rely on each other when the region was sparsely populated.

"Over the course of decades, it became a farming community," Osborne says. "That same spirit of cooperation remains today. Farmers still need to rely on each other. We need each other to survive and thrive."

A healthy transportation system supports the Lubbock region, which proudly proclaims itself the "Hub City" for the Ports-to-Plains Corridor. Major interstates and highways, including Interstate 27, connect the city to the two major east-west interstate systems: Interstate 20 and Interstate 40.

The city offers rail access as well. Lubbock is located on the main line of the BNSF Railway, which connects the city to major metropolitan areas of the central and western United States. The Lubbock Rail Port, a 526-acre tract of land located just north of the Lubbock Preston Smith International Airport, provides convenient access to Interstate 27, BNSF Railway, and the airport.

"Having easy access to an international airport is critical in expediting exports and imports," notes Allen.

The Lubbock Rail Port is currently buzzing with activity, thanks to new rail and road construction funded by a $1.5-million matching grant from the U.S. Department of Commerce Economic Development Administration.

If all roads—not to mention airways and train tracks—lead to Lubbock, it also is fair to say that all winds blow in its direction.

In Amarillo, the Ports-to-Plains Alliance has a strategic partner positioned mid-continent with access from California all the way to North Carolina. Interstate 40 runs east to west through the state and beyond, and Interstate 27 is the thoroughfare to the north and south.

It is little wonder, then, that the Amarillo Economic Development Corporation (EDC) is a key member of the alliance.

"Alliance is a perfect term," says Ashton Allison, the Amarillo EDC's director of marketing and communications. "All the communities align themselves, creating a carefully and thoughtfully constructed dialogue to advance the corridor's interests."

As one of the largest cities along the corridor, Amarillo benefits from the full array of economic development opportunities the Ports-to-Plains Alliance offers.

Another organization of like-minded interests, the High Ground of Texas, also serves the region. The 25-year-old organization represents some 75 members in the West Texas region. The group's principal purpose is to create jobs and increase the region's tax base.

"Within that coalition, all the communities work together in an unconventional way," Allison says. "We all recognize that what is good for any one of us is good for the region as a whole."

The Amarillo region's advantages are well-recognized. The city ranked 17th in the small cities category out of 179 metropolitan areas in the nation in the 2012 Milken Institute Best-Performing Cities Index, which ranks U.S. metropolitan areas by how well they are creating and sustaining jobs and economic growth. Factors considered for the distinction include job, wage and salary, and technology growth.

"Among Amarillo's strengths is its workforce," says Allison. "Companies from outside the region that locate here often say the city's workforce is the best they have found anywhere."

The quality of life in Amarillo matches the quality of its workers. The city offers an ideal business climate, low cost of living, a safe environment, excellent schools, and diverse neighborhoods.

These advantages set the stage for even more success for the city and the Ports-to-Plains Corridor, of which it is such an important part.

The Ports-to-Plains Corridor creates an intersection of opportunities and challenges. The opportunities are abundantly clear, and they are being embraced not only in Big Spring, Lubbock, and Amarillo, but at all points along the corridor. In Texas alone, $250 million has been approved for corridor-related projects in just the past two years, the Ports-to-Plains Alliance reports.

The challenges lie in transportation infrastructure. That's where the Ports-to-Plains Alliance comes in. "There is such a shortage of transportation funding nationwide that we really have to work together as advocates," Reeves says. "The needs in urban areas are different. We work with other rural organizations on behalf of our region."

The alliance's advocacy efforts are focused primarily on state legislatures, but the organization is also actively promoting relationships with Mexico and Canada.

"And we stay updated on what's going on in Washington, D.C.," Reeves adds, with lobbying targeted to transportation, energy, and agriculture issues.

"The Ports-to-Plains Corridor represents a great economic boom for our states and our country," says Reeves. "We look forward to North American energy independence, but we must have the transportation infrastructure to get there."

For information on featuring your region in an Economic Development Supplement, contact James O. Armstrong at 314-984-9007.