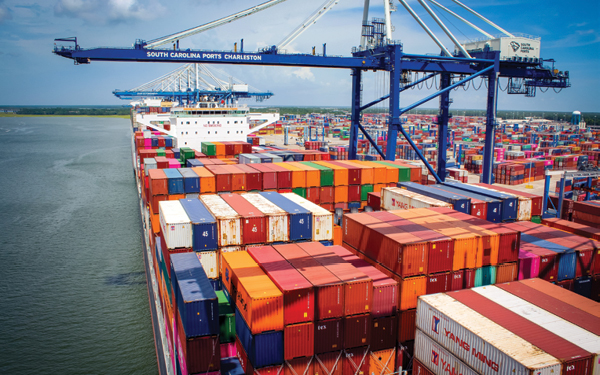 To address the multiple challenges of rising container volume, larger ships, and the need for more sustainable operations, many ports are embarking on substantial capital improvement projects. Here's what's on deck.

It has been a tumultuous time for many ports. Between mid-2020 and mid-2021, the volume of twenty-foot equivalent units (TEUs) handled at North American ports jumped 29%, says Jason Price, director, research, with real estate firm Cushman & Wakefield.

Even when comparing the first half of 2021 to the second half of 2019—the last six-month period before COVID shuttered most economies—port volume rose by 13.4%.

Along with fluctuating cargo volumes, many ports must accommodate ever-larger container ships. Between about 2008 and 2018, both the average and maximum size of container ships doubled, the International Transport Forum reports. The largest container ships now boast carrying capacities of about 20,000 TEUs.

These changes have contributed to delays at some ports. As of mid-September 2021, for instance, a record 56 ships were waiting to berth off the coast of California.

Even as volumes rise and ships get bigger, a growing number of ports—particularly those on the U.S. West Coast—are focused on identifying cleaner fuels and reducing carbon emissions from their operations, says Matt Godden, president and chief executive officer with Centerline Logistics in Seattle.

To address the multiple challenges of rising container volumes, larger ships, and the need for more sustainable operations, many ports are embarking on substantial capital improvement projects. Here are just a few.

The NWSA has had a busy few years. In 2019, it opened the Husky Terminal in the Tacoma Harbor. With eight super-post-Panamax cranes and other pier reconfiguration projects, the terminal can serve two 18,000-TEU container ships.

Together with its private partners, the NWSA has committed more than $500 million to modernize Terminal 5 in Seattle, Stambaugh says. When complete, the modernized terminal will feature 185 acres of terminal capacity, on-dock rail, and 1,500 reefer plugs, among other features.

The NWSA also is adding shore power and other green technologies. The modernization of Terminal 5, for instance, includes installing shore power infrastructure, which allows a vessel to plug into electricity while at berth, cutting air emissions.

"By equipping our terminals to handle ultra-large container ships, cargo movement can increase while we reduce the impact to the surrounding Puget Sound habitat," Stambaugh adds.

Port of Gulfport: A Blue Economy

The Port of Gulfport Restoration Program (PGRP), initiated after Hurricane Katrina in 2005 and completed in 2019, doubled the footprint at the Port of Gulfport to nearly 300 acres, says spokesperson Kimberly Aguillard. It also added new tenant facilities, and a 300,000-square-foot warehouse for dry and chilled storage, with blast freezer storage capacity. Three ship-to-shore gantry cranes were added as well.

In February 2020, the U.S. Department of Transportation's Maritime Administration awarded the port, located on Mississippi's Gulf Coast, a grant of $15.7 million for the Port of Gulfport Access Project, which will improve the roadway infrastructure that feeds into the port and enhance intermodal connectivity, boosting efficiency. The project also includes a bridge over U.S. Highway 90, and implementation of an Intelligent Transportation System (ITS).

Through a partnership with the University of Southern Mississippi,the port has developed a roadmap that will build new capacity for Mississippi's Blue Economy. ("Blue economy" refers to the sustainable use of ocean resources for economic growth, including maritime transport, improved livelihoods, and the health of the ocean ecosystem.) This includes a $30 million investment to construct the Roger F. Wicker Center for Ocean Enterprise, which broke ground in November 2019, Aguillard says.

The Center will facilitate investments in high-end engineering and advanced technology development. It's expected to be complete in April 2022.

The Middle Harbor Terminal Redevelopment Project at the Port of Long Beach in California is a 10-year, $1.49-billion construction program. It combines two aging shipping terminals into one advanced, green container terminal.

The rail yard enhancement at Pier B, a $870-million project, will expand rail capacity and help streamline on-dock rail operations in the terminals. "We're committed to providing the infrastructure needed to continue ensuring the gateway is cost-effective," Cameron says.

At the same time, the port strives to remain a friend of the community, and meet its environmental goals. For instance, with its electric-powered cargo-handling equipment, the Middle Harbor terminal is one of the world's cleanest, Cameron says.

The updated, 4,200-foot-long wharf offers shoreside electricity that ships can use while berthed, enabling them to shut down their diesel engines and cut emissions. The goal is to balance commerce with safeguarding the environment. While not easy, "we're making sure we're doing the things we need to," Cameron says.

Port Manatee, a deepwater seaport located at the entrance to Tampa Bay, "is positioning itself to become a home port for a small Asian container service within the next two years," says Charles D. Tillotson, chief commercial officer. The ideal service would require a quick connection to the U.S. Florida and I-75 and I- 95 corridor markets, particularly a container service that continues to the U.S. Gulf, to ports like Houston or New Orleans, or transships to and from Mexico, he adds.

To that end, the port is building a container yard and gate infrastructure capacity to support future terminal and gate growth needs, with a vision of capturing a third container carrier in the expanded container yard, says Carlos Buqueras, executive director.

Expansion of the port's north gate will increase outbound lanes from two to four. The project also includes a technology upgrade, including the implementation of state-of-the-art badge readers for port-issued and TWIC (transportation worker identification card) badges.

"This project upgrade improves the port's security stature for ingress and egress while simultaneously easing turn-times for our customers' trucking partners," Tillotson says.

Port of Montreal: Optimizing and Expanding

Over the past 10 years, cargo volume at the Port of Montreal, located on the St. Lawrence River, has increased by about 15%. That includes a jump in trade with Asia, from about 3% of traffic in 2008 to close to 30% of container volume at the port today, says Mélanie Nadeau, vice president, public affairs and community relations.

"With two-thirds of Canada's population located in Quebec and Ontario, BCOs (beneficial cargo owners) quickly realized the benefit and advantages of using the Port of Montreal for trade with Asia, and they continue to include and grow the Montreal portion in their strategies," Nadeau says.

A number of improvements enable the port to handle this growth. In December 2020, the Port of Montreal completed construction on the Viau Container Terminal. This boosted the port's container-handling capacity by 350,000 TEUs. The project also included the installation of two gantry cranes, with heights of 95.5 meters each (about 104 yards).

The port also is optimizing facilities at the Bickerdike Terminal, which was built in 1896. Improvements include redeveloping truck access, repairing the railway network, and upgrading electrical capacity.

Also underway is the largest expansion project in the Port of Montreal's history—the expansion in Contrecoeur, about 45 kilometers (28 miles) northeast of Montreal. "We are developing a container terminal there that will eventually have a capacity of 1.15 million TEU containers," Nadeau says.

Among other features, the terminal will include two berths, a container-handling area, and an intermodal marshalling yard connected to the main rail network. Work is expected to conclude in 2025.

As of mid-2021, the East Coast ports' share of imports hit a record 45%, according to Cushman & Wakefield's North American Ports Report, Mid-Year 2021.

In recent years, leadership at South Carolina Ports Authority, which owns and operates the Port of Charleston, Port of Georgetown, Inland Port Greer, and Inland Port Dillon, has invested more than $2 billion to enhance capacity and handle the influx of retail goods and cargo volumes, says Liz Crumley, communications manager.

For instance, the launch of operations at Hugh K. Leatherman Terminal in March 2021 marked the first greenfield port container terminal in the United States in more than a decade. Phase 1 of Leatherman Terminal, a $1-billion investment, added 700,000 TEUs of capacity and a 1,400-foot berth to the Port of Charleston and the East Coast port market.

The terminal can handle 20,000-TEU vessels and boasts five ship-to-shore cranes with 169 feet of lift-height above the wharf deck, as well as 25 hybrid rubber-tired gantry cranes. At full buildout, the three-berth terminal's annual throughput capacity will hit 2.4 million TEUs.

Work also continues on modernizing Wando Welch Terminal, also at the Port of Charleston, so it can handle record cargo volumes and mega container ships. The full renovation will yield 15 ship-to-shore cranes with 155 feet of lift height above the wharf deck, 65 rubber-tired gantry cranes, and a more efficient terminal, among other features.

The Charleston Harbor Deepening Project is on track to hit a depth of 52 feet by 2022. This will make it the deepest port on the East Coast.

Even as cargo volumes stabilize somewhat, many ports will continue to confront challenges. A key one is adapting to a changing climate. "We're beginning to see more emphasis on planning for future sea level rises," Massengill says. Given that ports depend on waterborne traffic, many are beginning to assess these risks and adopt mitigation measures, he adds.

The bipartisan federal infrastructure bill, as outlined in July 2021, included about $17 billion for port infrastructure. If approved, it will direct significant funds to projects that include consideration for sea level rise, sustainability, zero emissions technology, and benefits to disadvantaged communities. "This could be a key opportunity for many ports to make needed upgrades and modernization efforts," Massengill says.

The terms "inland port" or "dry port" may seem like oxymorons. Don't ports, by their nature, need to be near water?

Not exactly. Inland or dry ports refer to the rail infrastructure from a seaport to an inland location, with a goal of relieving port congestion, says Michelle Comerford, project director, and industrial and supply chain practice leader with Biggins Lacy Shapiro & Company, a location economics consulting firm. The idea is to "remove the bottleneck at the water's edge," she adds. As a result, inland ports can be located miles from any body of water.

As container traffic has swelled, finding road networks to get products in and out of ports has become increasingly challenging, Comerford says. In addition, the land near seaports tends to be both limited and costly.

Inland ports allow shippers to access the services of a port without being right next to it. Inland ports also allow companies to locate their products closer to their markets, Comerford says.

For example, Inland Port Greer, which is owned and operated by the South Carolina Ports Authority, extends the Port of Charleston's reach 212 miles inland via rail. About 95 million consumers are within a day's truck trip of the facility.

Inland ports are used around the world, says Jean-Paul Rodrigue, a professor in the department of global studies and geography at Hofstra University. "They make complete sense," he says. "When people can build one, they do."