On the Road | Piedmont Triad, North Carolina: Visions of an Aerotropolis 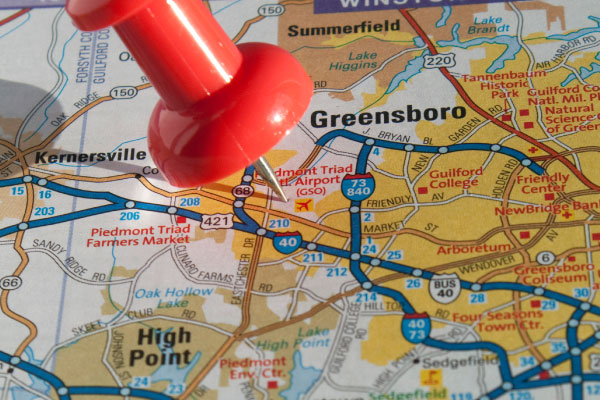 In May, the Piedmont Triad Partnership invited me to join a press tour of the area.

We visited several manufacturing and distribution facilities, and Old Dominion Freight Line's headquarters, but the Piedmont Triad International Airport (PTIA) was the focal point. From my initial arrival to our final stop at the new runway and FedEx Mid-Atlantic Air Hub, conversation generally orbited around plans for an Aerotropolis.

The word itself, and the vision it conveys, has an almost futuristic subtext—a "Jetsonian" utopia in my cartoon-cluttered mind. But as I learned, the concept is more grounded than that. Air freight and FedEx are the magnets that build attraction, but warehouses, trucks, and manufacturing are the bearings that will make this vision real.

Things are looking up in the Piedmont Triad.

Build it and They Will Come

North Carolina is popularly recognized in two ways: as the Tar Heel State and First in Flight.

Both labels bear proof of North Carolina's rich history as a center for manufacturing and transportation. Flying into Piedmont Triad International Airport, located in the North Central part of the state, these influences quickly emerge.

From above, a patchwork pattern of open spaces and heavily wooded tracts points to the state's well-rooted timber industry. You can almost imagine early pioneers clear-cutting old-growth forests, firing their kilns, extracting pine pitch, and tarring their heels in the process. Eventually a vertical was born, paving the way for pulp, paper, textile, furniture manufacturing, and a host of other industries.

If the marvel of flight and North Carolina's role in its ascent doesn't immediately grab your attention, passing license plates emblazoned with "First In Flight" will. Thanks to the Wright Brothers and a breezy testing ground in Kitty Hawk, forested enclaves soon heard the buzz of planes flying overhead.

Today, the buzz over Greensboro, Winston-Salem, and High Point is no less striking. The debut of the FedEx Mid-Atlantic Air Hub in June 2009—a nearly one-million-square-foot sorting facility adjacent to the airport—and the projected completion of a 9,000-foot-long runway at PTIA have imaginations soaring. Local businesses, government, and economic development agencies have grand plans for building an Aerotropolis that will define the future of the region.

All Things Being Different

Wood product manufacturing and aviation aren't the likeliest of pairings—at least not since the days of the Wright Brothers. But with a little imagination and design, their complements materialize.

North Carolina's economic development advocacy is taking a similar approach by leveraging the state's diverse resources to market its differences.

"Each region of North Carolina plays its own important role," shares Don Kirkman, president and CEO of the Piedmont Triad Partnership. "We don't have a monolithic statewide economy. The coast has tourism; Piedmont Triad has manufacturing, transportation, and logistics. The Research Triangle has R&D and life sciences; Charlotte has a financial services sector."

Now both businesses and government are looking to expand North Carolina's transportation capabilities and use them as a means for tying these clusters together.

"Transportation and logistics transcend the economy in terms of producing and moving goods," says Kirkman. "It allows us to recruit new business over a number of core areas."

The debut of the new FedEx hub and plans for a web of manufacturing, distribution, and logistics infrastructure around PTIA will make the area a keystone for the state economy. The idea for an Aerotropolis is contingent on multiple forces. FedEx will bring business because of its brand, but the build-out of supporting resources and services is equally important.

"Major players come with a sophisticated need, which, in this case, is air freight," says Ted Johnson, executive director of Piedmont Triad International Airport. "But it wasn't our pretty faces that attracted FedEx. Good roads are important, too."

In many ways, the Triad's agribusiness legacy has created a foundation for attracting vertical industries and driving transportation infrastructure development. Now the latter is returning the favor and the metamorphosis is already underway.

Honda Motor Company is building its new aircraft subsidiary at PTIA, with plans to manufacture its HondaJet nearby. "Not every component used to build that plane will be manufactured in Piedmont, so Honda will be challenged with getting parts here on a timely basis," adds Johnson.

That's why Honda and other companies sourcing mission-critical parts are locating near the hub. But even for non-traditional airfreight shippers, the promise of an Aerotropolis has a huge upside because it will attract more business to the area—business that will demand multimodal transport and specialized logistics capabilities well beyond the airport.

As a paper buyer, Carson-Dellosa Publishing falls a few rungs down the wood industry's evolutionary ladder. Three years ago, the educational publishing house located its headquarters and primary U.S. distribution center in Greensboro, largely due to its proximity to East Coast and Midwest markets, but also in anticipation of the new FedEx hub.

"The paper industry is not generally time-sensitive," says Rich Lugo, vice president of operations, Carson-Dellosa. "A one-day difference in transport doesn't warrant extra expense. But having options is nice."

With the opening of the FedEx hub Carson-Dellosa can take orders at 2 p.m. and ship by 6 p.m. the same day. This offers greater flexibility in fulfilling time-sensitive West Coast orders, and Lugo anticipates pushing that dial even further to serve customers better.

"Dealers are buying in greater volume or ordering less, then expediting to fill flow," Lugo explains. "Some dealers don't want more inventory than they can sell, so they are not buying more than they need. Instead of ordering a box of books, for example, they might buy four books and choose second-day air. It has become more of a replenishment set-up."

Carson-Dellosa is heavily product-driven, so demand sensitivity and responsiveness is critical to delivering the best customer service. "We used to fall 10 days behind shipping orders," he adds. "Now, with our direct-to-consumer business, it's 24 hours. We're bringing service along with good product."

Out on the tarmac, you can appreciate the scope of PTIA's expansion project. Core samples stick out where lights will be planted along Runway 5L/23R, the 9,000-foot-long strip under construction to support the FedEx operation. The newly paved, coal-black ribbon of road lies amid reddish clay soil deposits that have been pushed about during the grading process. The runway waits for direction—the lights, lines, arrows, and signage that will guide freighters to and from the hub.

For airport officials, that direction has already been drawn out. The planning and construction of the FedEx hub has been a decade in the making, so anticipation is palpable.

Driving into the new FedEx facility, you feel that tide shifting, seismically so. But you wouldn't know it by the looks of things. A lone security guard seems overburdened by boredom as he dutifully inspects credentials. There is no one else around.

The boxy, off-white behemoth of a building dwarfs everything else around. It is nondescript except for a large FedEx logo on the airport-facing side. Inside, workers are likely fine-tuning the machinations that will help sort up to 24,000 packages per hour.

Outside, the hub is vacant. A few trucks linger but no airplanes are waiting in queue. It's eerily quiet and devoid of movement. But it won't stay that way for long.

You can imagine the pent-up energy and purpose ready to engulf this space, like a stock exchange before the bell rings. It's just a matter of time.

And that time is now. The Piedmont Triad's past and future are aligning as grass-roots industry and transportation innovation reveal a new root and route for economic development. The Tar Heel State is in full flight.

The day before I arrived in Greensboro, I was winging my way back from Northern Ireland, with a connection through London Heathrow's labyrinthine terminal. This time, fortunately, my luggage joined me in Newark. Flying into Piedmont Triad International Airport (PTIA) was a welcome reprieve. Regional airports tout accessibility and convenience as primary strengths, and PTIA is no different.

The objective of the Aerotropolis is to apply that same model to the cargo side of the business—to offer complementary modes, infrastructure, and services that facilitate product movement in and out of the region.

The expediency of air freight is a given. But the ability to maintain product flow and velocity is contingent on other factors. First- and last-mile delivery to and from the airport is important, as is adequate road and rail infrastructure. Foreign trade zones and bonded warehouses, technology and third-party logistics service providers, can help manage regulatory compliance and ensure timely transshipment. All these pieces will be part of the Aerotropolis.

Liberty Hardware is proof-positive of the Piedmont allure. The cabinet hardware and decorative home furnishings supplier relocated to Winston-Salem in the 1980s to be closer to the region's established wood furniture industry. Two decades in, and despite outsourcing's grip on North Carolina furniture manufacturing, Liberty Hardware is thriving.

Walking around the company's 680,000-square-foot distribution facility, I am struck by its sterility. Its floors are immaculately clean. The sheen from the overhead lights is glaring. The only pollutant is the hum of fans and the whir of automated guided vehicles and conveyors flowing product about. The DC's sorting operation has the look and feel of a baggage claim carousel—except faster and without that nagging feeling of "maybe, maybe not."

Colors abound. Red stripes, green racks, and yellow columns liven up industrial grays. Yet, oddly, it is the blue shrink-wrapped pallets that capture my attention. Why blue? Because it grabs attention, visually differentiates product, and reduces claims.

Looking up at the banners hanging from the rafters—"Don't Take Chances with Safety" and "100% Complete, Accurate, On-time"—Turner's words resonate.

The point is crystal clear.

At a welcoming reception sponsored by the Piedmont Triad Partnership, I find myself reaching beyond the Swedish meatballs for a way to introduce myself to a collection of local transportation and logistics luminaries. As a writer, it's rare that I find myself at a loss for words. But in public it's different.

After a series of fumbling handshakes and mumbled introductions, I ditch logistics and go straight for the familiar—college basketball.

"So, are you a Blue Devils or a Tar Heels fan?"

The reaction is immediate and charged. Quickly I learn the nuances of the Duke/UNC rivalry. Feeling confident, I go with the flow, pick up some nerve, and toss out my next question.

"How do you feel about the per-mile tax that has been pitched as a revenue source for North Carolina infrastructure projects?"

Apparently I know how to smother conversation as quickly as I can kindle it. Back to basics.

"So, what about Davidson...where do they fall in the pantheon of Carolina basketball?"