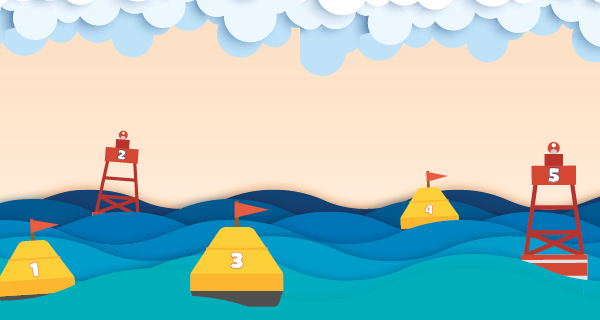 Oh buoy! Here are five maritime developments that have shippers bobbing and drifting through economic riptides.

The international shipping industry carries about 90 percent of the world's trade, according to the International Chamber of Shipping. That means any trends impacting the maritime industry also reverberate to shippers. Here are five maritime trends to watch:

In addition, as carriers join forces—through either a merger, acquisition, or operating agreement—the numbers of both steamship lines and trips typically decline. As a result, "beneficial cargo owners have fewer carrier options in terms of the number of lines and service strings available," Kelly adds.

In the past, each shipping line typically had its own set of competitive factors, such as when it sailed and what terminals it called. That has largely dissipated. "Several lines sharing the same port of load, day of load, and port of discharge reduces their ability to differentiate themselves," Kelly says.

So when carriers end up competing on price, "it's a race to the bottom," he adds.

This environment might not last forever, however. Consolidation inevitably means less competition. As in any industry, that likely will lead to higher rates.

Is yet more consolidation likely? Not among the largest carriers, according to Nils Haupt, spokesperson with Hapag-Lloyd. For starters, most of the big carriers still are digesting the mergers they've already completed. In addition, government authorities in different countries likely will look closely at any future transactions, out of concern that the resulting companies might become so strong they'd be able to skew the market.

One reason many carriers align with former competitors is that ship sizes are generally increasing. Fifteen years ago, a ship that could carry 6,000 to 8,000 TEUs was considered huge, says Bradley Lima, dean and vice president for academic affairs with the Massachusetts Maritime Academy. Today, many ships can accommodate 16,000 to 18,000 containers.

The larger ships introduce greater economies of scale, says David White, secretary and treasurer of the National Association of Maritime Organizations and executive vice president with Virginia Maritime Association and Hampton Roads Shipping Association. The upside is a generally lower per-unit cost of transportation, which may mean savings for shippers.

On the flip side, the ships have become so big that only a limited number of ports can handle them efficiently. But many ports are taking steps to accommodate larger vessels.

For instance, in August 2018, Port Houston took delivery of three 270-foot-tall large cranes that can load and unload vessels up to 22 containers wide. But even with those accommodations, shippers need to monitor the sizes of the ships that are moving their cargo, and the ports that can handle them. The goal is to find the route that allows them to access their inventory as quickly as possible, once it reaches land.

The proliferation of massive ships also contributes to overcapacity in the maritime market. "Shipping lines are adding capacity to fleet beyond demand," White says. While the overcapacity remains, it can play to shippers' advantage, he adds, as it acts as a lid on prices.

Another impact of the growing number of massive ships is the greater amount of space and larger equipment they require once they dock at a port. The ports need to be deep enough to handle the vessels, and their equipment needs to be able to efficiently process the thousands of containers the ships are carrying.

Then, for the goods to quickly move to their final destinations, the ports need sufficient access to roads and rail. In the United States, "the hinterland issue is huge," says Joan Mileski, Ph.D., professor of maritime administration and marine science with Texas A&M Galveston.

Not all ports have sufficient access to effective road and rail systems. As a result, carriers increasingly need to choose ports based not only on location, but also on who's open. "Shippers may want to be in New York, but if they can't get in there, they'll go to Norfolk or Savannah," Mileski says.

The introduction of electronic logging devices for truckers, which enforces limits on the hours each driver can work, also may impact marine transportation. "It's the ripple effect," White explains. "A tightening truck supply can impact the ability to quickly move larger volumes of goods through port facilities."

When assessing transportation routes, shippers need to consider the ease with which different ports can access road and rail networks, as well as the distances over which their goods must travel by truck from a port to their final destinations.

For a long time, many marine carriers had little incentive to accelerate the rate at which they processed shipping documents. After all, water transportation itself takes a relatively longer time than other forms of transportation, Kelly says. Even when documents were manually processed, they typically wouldn't hold up shipments.

That's changing. More shippers are asking for greater transparency and real-time visibility to their cargo. Moreover, the increasing digitization of documents such as bills of lading within a more automated supply chain can cut costs and increase efficiency.

Blockchain may be one way to address the issue. "It has the potential to change the industry," says Christine Isakson, assistant professor in the department of international business and logistics with California State University Maritime Academy. The World Economic Forum lists blockchain among five technologies that can change global trade forever, noting that it can make the movement of goods more efficient and reliable, and streamline trade finance.

In August 2018, IBM and Maersk created TradeLens, an initiative to apply blockchain to the global supply chain. More than 20 port and terminal operators around the globe are piloting the solution.

The challenge? "Companies need to be willing to be more transparent," Isakson says. Some companies may balk at opening their transactions to other links in their supply chains, concerned they'll lose a competitive advantage. At the same time, few companies can afford to ignore the inroads blockchain is making.

While technology offers compelling benefits, it has a downside. Cybersecurity has become a greater concern within marine transportation. "For example, a 1,000-foot-long ship can become a floating bomb," Lima says.

Indeed, concerns about cyber attacks prompted the Navy to reintroduce celestial navigation training in 2015. In 2017, the Coast Guard issued draft guidelines for addressing cyber risks within facilities regulated under the Maritime Transportation Safety Act. Among the recommendations: Develop a risk management team and define a cyber risk management policy. When possible, shippers need to ask carriers about the steps they've taken to protect against cyber threats.

Discussions about technology and the maritime industry inevitably lead to questions about autonomous shipping—vessels that drive themselves with a few or no human operators. Autonomous shipping is at least 20 years away, predicts Paul Szwed, associate professor of international maritime business at the Massachusetts Maritime Academy. Workload reductions resulting from automation, however, are possible before then, he adds.

Like many other sectors of the global economy, the maritime industry faces increasing scrutiny over and restrictions on its environmental impact. "Green shipping is big," Mileski notes.

As of January 2020, many carriers will need to comply with Annex VI to the MARPOL Convention, which reduces the global limit for the sulphur content of ships' fuel oil from the current 3.5 percent to .50 percent. Because the fuel needed to meet the new standards typically costs more to refine, carriers' costs likely will increase, Kelly says. That may mean higher costs for shippers as well.

Increased restrictions on ballast water also reverberate to shippers. Ships carry water in their ballast tanks to improve stability and balance. When a ship takes in water from one part of the world, it also picks up the organisms that live there. Then, when it discharges the water, often in another part of the world, it also introduces the organisms to the new area. That can cause environmental problems.

As of September 2017, many carriers had to comply with stricter standards for managing ballast water, as outlined in the International Convention for the Control and Management of Ships' Ballast Water and Sediments. In addition to higher costs, ships may have to allocate more time to complying with the regulations.

"The maritime industry tends to be traditional," Isakson says. At the same time, it's changing along with the world in which it operates. That's influencing the ways in which shippers establish their supply chains.