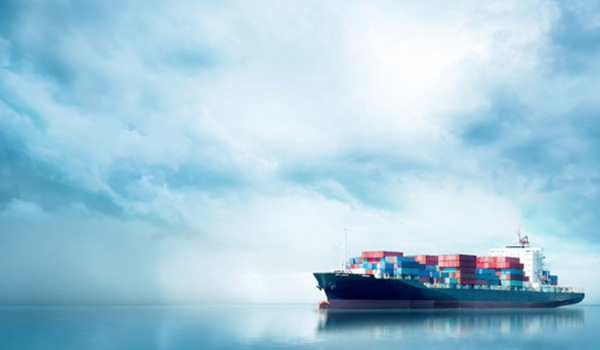 While the prospect of higher tariffs and the cost of low-sulfur fuel requirements pose concerns for the maritime industry, it's forging ahead with bigger, more automated seaports, as well as technology that improves visibility, reduces its environmental impact, and streamlines operations.

While the maritime industry faces challenges—uncertainty around tariffs and concerns about the ultimate cost of the low-sulfur fuel requirements that go into effect in early 2020—it's also experiencing changes that should be positives for shippers. These changes include upgrades at many seaports as well as collaboration between neighboring ports; the formation of the Digital Container Shipping Association and the Global Shipping Business Network; and new technologies that can offer greater visibility to ships' cargo. Moreover, these positive shifts in maritime logistics promise to continue.

It's not all smooth sailing in the maritime logistics realm. In August 2018, the Trump administration announced that it would raise tariffs from 25% to 30% on about $250 billion in goods coming from China.

Prior to the tariffs, trade between China and the state of Louisiana totaled about $7 billion per year, says Chris Kane, New Orleans-based partner and global trade, transportation, and logistics team leader with law firm Adams and Reese. It has since dropped to about $3 billion.

While tariffs are definitely a challenge, they also present an opportunity. Louisiana is now exporting more than it had been before the tariffs started. However, that trade is with Canada, Mexico, and South Korea, among other countries. "It's a net positive for exports," Kane adds.

To be sure, import tonnage remains down, due largely to a drop in steel imports. "It's not like a magic wand passed over Louisiana and we were not impacted," Kane says. But, the market "baked in," or accounted for the potential instability resulting from the tariffs and implemented strategies to take advantage of opportunities.

Indeed, many seaports across the East Coast are enjoying impressive growth. They increased their total share of the inbound container market to 43%, up from 42.7% in 2017, notes Cushman & Wakefield's 2019 North American Ports Outlook (see sidebar). Seaports on the West Coast account for the remainder.

"I think the share will go to 50-50 when both East and Gulf Coast seaports are included," says Jim Newsome, chief executive officer with the South Carolina Ports Authority. He notes that 70% of consumers in the United States live east of the Mississippi River. By moving their goods directly from Asia to the Gulf or East Coast, many shippers can cut intermodal transportation costs.

The three alliances—2M, Ocean Alliance, and THE Alliance—among top container carriers continue to impact maritime logistics. "Alliances bring a measure of stability to the industry," Newsome says. They enable carriers to offer a range of routes without undertaking the massive investment in vessels that would be required if each carrier made all routes available on their own.

Still, concerns remain about having such a large percentage of the shipping industry concentrated in a small number of players. The top 10 shipping companies control about 83% of the global ocean container shipping capacity, Cushman & Wakefield reports. That could lead to fewer options and higher prices for shippers.

In addition, the alliances often operate with a hub-and-spoke model, which can mean more trans-shipments, in which one ship transfers cargo to a feeder vessel, says Mollie Bailey, vice president, international with Transplace, a transportation management solutions provider. If the first ship is late, containers may sit before they can move to another ship.

It's not just carrier alignments that are impacting maritime logistics. More seaports in the United States and in some Asian countries are collaborating to consolidate port operations, achieve economies of scale, and improve overall efficiency.

As one example, four years ago, the ports of Seattle and Tacoma joined operations. "We've been able to prioritize our investments and develop a strategy that will optimize utilization of our terminal assets across the gateway," says Larry Kvidera, marketing and international trade manager with the Northwest Seaport Alliance.

Maritime logistics increasingly is concerned with moving goods with as little environmental impact as possible. Seaports, carriers, and affiliated firms are rising to the challenge. "The ocean shipping industry doesn't get credit for its sustainability efforts," Newsome notes.

A case in point is the ruling by the International Maritime Organization. As of January 1, 2020, ships will need to use fuel with a sulfur limit of 0.50%, down from the previous limit of 3.5%.

Hapag-Lloyd will meet this requirement in several ways, Haupt says. It will run one ship on liquid natural gas, equip 10 others with scrubbers, and use low-sulfur fuel on the bulk of its fleet. These initiatives will help Hapag-Lloyd work toward its goal of reducing emissions by 20% by 2020.

The shift to low-sulfur fuel is just one step carriers are taking to reduce their environmental impact. In June 2019, Maersk unveiled a carbon-neutral vessel powered by biofuel.

In August 2019, Leclanché, a supplier of battery energy storage systems, announced the commercial launch of the world's largest all-electric ferry. Over one year, it should prevent the release of 2,000 tons of carbon dioxide and 42 tons of nitrogen oxides, among other pollutants. The battery's lighter weight and smaller size, when compared to a diesel generator, will provide additional energy savings, says Dean Jennings, vice president, e-marine business, Leclanché.

Carriers also are identifying ways to make better use of the backhaul. Many times, containers of goods coming to the United States from Asia are empty on their return trips. Sensors can help track their whereabouts, making it easier to fill them with goods for this leg of the journey, says Vicki Warker, chief marketing officer with Savi Technology, a sensor technology provider.

Along with the vessels themselves, many seaports are going green. The Port of Long Beach, for instance, is investing $1.5 billion to create the world's greenest container shipping terminal, says Dr. Noel Hacegaba, deputy executive director of administration and operations at the port. It will accomplish this by implementing zero-emissions electric equipment, conserving energy and water, and using recycled materials, among other steps.

Over the next decade, the port also will invest in an on-dock rail program that will allow it to assemble trains up to 10,000 feet long. This will eliminate up to 750 truck trips for each mile of train. "We're moving more cargo with less environmental impact," Dr. Hacegaba says.

Along with reducing environmental impact, the technology initiatives underway within many seaports and carriers promise to streamline operations and bring greater visibility to maritime logistics. "The ocean part of a multi-modal shipment is where it has been most blind," Warker says.

That's changing. For instance, Savi can draw on the 10 to 15 million data points it collects each day to alert shippers to growing port congestion. To provide real-time visibility, Savi combines sensor readings and data from GPS, telematics, ocean vessel locations, and other sources.

Another example comes from Traxens, a provider of supply chain data and services. In June 2019, Traxens announced it was installing its tracking telematics technology on the refrigerated containers of PT TKSolusindo, an Indonesian non-vessel operating common carrier. Shippers will gain visibility to their containers throughout all legs of the journey.

Many seaports also are working to boost visibility. The Port of New Orleans is evaluating cloud-based data aggregators that heighten supply chain visibility. "Ports are increasing their focus on technology since it's becoming more of a customer expectation," says spokesperson Jessica Ragusa.

Another benefit of visibility is agility. By maintaining a better handle on its supply and distribution routes, a shipper can identify a viable Plan B, or even Plan C, should it become necessary to change course due to severe weather, political instability, or other events. "You can compare the cost of Port B versus Port C, including the cost of tariffs and changing routes," Warker says.

"We are excited to see carriers, terminals, shippers, and forwarders coming together to connect ecosystems and build a solid foundation for the digitization of the shipping industry to enable the development of innovative solutions based on distributed ledger technology," says Lionel Louie, chief commercial officer with CargoSmart Limited. Distributed ledger technology allows each party visibility, at the same time, to the same data, from its original source, he adds. The result should improve maritime logistics effectiveness.

Few seaports of the past were built to handle spikes in traffic and the mega-ships now traversing the oceans. "Their infrastructure wasn't built for Easter Sunday," says Mike Wilson, chief executive officer with Consolidated Chassis Management, a cooperative chassis pool manager.

As with other areas in maritime logistics, this is changing, largely due to changes in seaports' physical infrastructure and IT systems. For instance, by 2021, the Charleston Harbor in Charleston, South Carolina, will be deepened to 52 feet. That will make it the deepest harbor on the East Coast.

Along with physical infrastructure enhancements, technology is streamlining port operations. The Port of New Orleans is investing in technology, such as optical character readers on container cranes, to improve production at terminals, Ragusa says.

And by pulling together the information gained through technology into a Port Community System, shippers can locate cargo within the port, identify delays, and make transportation and routing decisions that will save them time and money, Kvidera says.

In addition, a growing number of stowage teams are using software algorithms to guide the loading and unloading of cargo. In the past, if a customer had, say, 50 containers on a ship, it wasn't unusual to find them mixed with other shippers' containers. That's not surprising, as most ships make several stops along their voyages, collecting more containers at each. Once the ship made its final stop, however, the jumble of containers would slow their transit out of the seaports.

The algorithms increasingly incorporate enough sophistication that they can account for the additional containers a ship collects. With this intelligence, yard workers can more easily assemble distinct groups of containers for different customers.

It's difficult to predict how the imposition of tariffs and potential trade wars will ultimately affect maritime logistics. Any negative impact, however, should be at least partially offset by the continued investments carriers, seaports, and the firms that partner with them are making in technology and equipment that promises to enhance visibility, speed operations, and improve environmental impact.

In 2018, inbound twenty-foot equivalent unit (TEU) volume to the top container seaports in North America increased by 6%, while outbound volumes inched up by 2%, according to Cushman & Wakefield's 2019 North American Ports Outlook.

West Coast: The strongest growth rates for inbound loaded containers were recorded at Prince Rupert (up 8.6%) and Long Beach (up 6.1%). Los Angeles inbound loads were up 3.3% and the Northwest Seaport Alliance experienced inbound growth of 5.2%. Oakland recorded a solid 5% inbound growth, but the port's generally strong outbound direction declined.

Gulf Coast: Houston had a strong year with inbound volume up 9.6% and outbound up 11.4%. For perspective, Houston's growth rates for both inbound and outbound were higher than the average for either the Atlantic or Pacific Coasts.

Atlantic Coast: Each of the largest U.S. East Coast ports did very well in 2018. Savannah had a record year with 10.9% growth on inbound loaded boxes and 5.2% outbound. Charleston and Norfolk were in the 4-6% range on inbound containers. The largest port on the East Coast—New York-New Jersey—recorded an 8.2% gain in inbound. 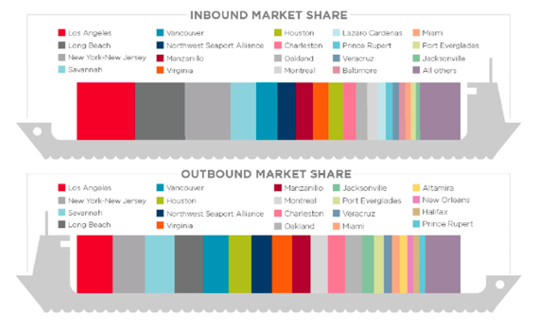