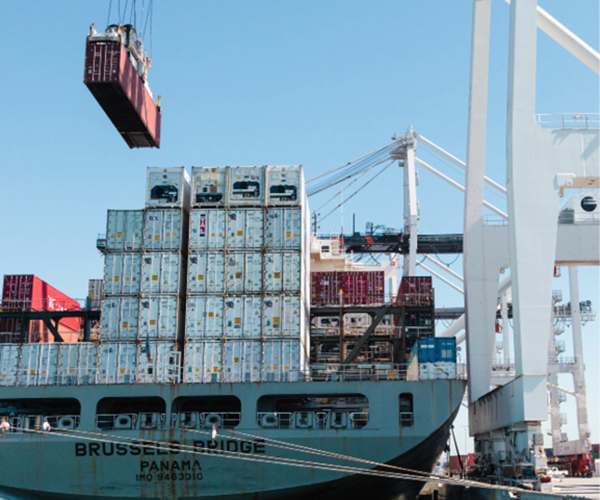 Marine ports load up on automation and digital innovation for fast, safe, and more efficient operations.

Like most other players in the global economy, marine ports have faced unusual conditions during the COVID-19 pandemic. For instance, as of mid-2020, the top 13 U.S. ports taken together were handling 10% less container volume than they did at the same time in 2019, says commercial real estate company Cushman & Wakefield. Yet in August, the Port of Los Angeles reported record-high container volumes, according to a September 17, 2020, report in The Maritime Executive.

In such a volatile market, the benefits of automation and information technology can prove even more important than in ordinary times. Ports have been investing in technology to help cargo flow more efficiently and reliably, reduce waiting times for drayage carriers, update shippers and service providers on the status of cargo, and more.

Here's how several North American ports are using technology to speed, smooth, and streamline their operations.

Port of Oakland: FITS and Starts

At the Port of Oakland, California, construction is underway on a $30.6 million project to implement a series of IT-based improvements known as the Freight Intelligent Transportation System (FITS) program.

The project is designed to improve the flow of truck traffic in and out of the port, update the port's security systems, and provide a common communication platform for first responders.

Port officials expect FITS to be fully up and running in the summer of 2022, says Pia Franzese, senior maritime projects administrator at the Port of Oakland.

1. The port will upgrade its emergency operations and traffic management center (EOC/TMC) so it can house data from various FITS devices in the field. The EOC/TMC will provide a centralized place to plan, operate, and manage traffic and incidents.

2. The port will provide Wi-Fi access for truckers and other users and close gaps in mobile phone coverage on port property.

4. The port will use cameras installed along its roadways, and video analytics technology armed with artificial intelligence, to monitor traffic conditions. "This information will be disseminated back to the EOC/TMC as well as pushed out to the public through the CMS and the Oakland Portal mobile app," Franzese says.

The Port of Oakland will operate the new FITS system for up to five years as a demo program. "If the system as a whole, or certain components, perform well over time, the port will then evaluate the benefit of continuing to use the system beyond this period," says Franzese.

If FITS is successful, it will improve the flow of truck traffic on the port, help operations and goods move more efficiently, enhance safety, and improve incident response capabilities.

"Benefits to shippers are anticipated to be improved coordination with the terminals and trucking community in terms of scheduling cargo pickup and drop-off, as well as streamlining access to scheduling appointments and paying fees, all of which improve operational efficiencies," she says.

Port NOLA: Jazzed for a SmartPort

A new SmartPort initiative at the Port of New Orleans (Port NOLA) aims to streamline operations, improve safety, and reduce disruptions by tracking and analyzing data collected from sensors and other sources.

The project, launched in July 2020, is a joint effort of the port, Louisiana Economic Development (LED), and The Water Institute of the Gulf.

The institute is currently working with IBM on the project's first phase: collecting data from sensors already installed on tugboats and barges in the Port NOLA district. Those sensors measure water depth and track each vessel's location.

"The pilot project will ultimately employ the crowdsourced depth data to produce a forecast tool that will inform decisions about draft clearance at specified locations along the river in near-real time," explains Jessica Ragusa, communications manager at Port NOLA.

The tool will also forecast patterns of sediment deposit in the coming weeks. Currently, the port must conduct costly surveys to determine when and where to dredge, with no ability to forecast future needs.

"Because water level and riverbed elevation are highly dynamic, there is a constant need to monitor the available draft along the navigation channel and ports to ensure safety and minimize interruptions to commerce," says Ragusa.

With more accurate information, carriers can better navigate the river. There will also be fewer vessel omissions—occasions when a vessel fails to call on the port because of conditions there.

The Water Institute and LED are now seeking funding for a second phase of the SmartPort project, which will integrate data from container terminal tenants, trucking companies, intermodal rail carriers, shipping lines, and cargo owners in a secure digital command center. The SmartPort Center, located on The Water Institute's campus in Baton Rouge, will deliver information on water conditions, drafts, weather, port logistics, and road traffic.

"The SmartPort project will provide actionable, real-time information that will help all port stakeholders, including rail and trucking, so they can better coordinate when they deploy their assets," Ragusa says. While all maritime customers will benefit, port officials are particularly excited about how the project will help the growing container shipping business.

"Occasional omissions occur as a result of high water and inability of the ships to pass under the city's Crescent City Bridge," Ragusa says. Better information will help solve that problem for container vessels.

Setting Sail with IT Innovations

Along with port authorities, ocean carriers are also investing in digital technologies to improve cargo flow.

For example, German shipping line Hapag-Lloyd now uses CargoMate, a fleet performance platform from Intelligent Cargo Systems in the U.K., to help monitor its vessels. The goal, says Hapag-Lloyd, is to improve efficiency and safety and to capture new data that it can use to improve its route and vessel performance.

In May, ZIM launched eZ Quote, a digital service for obtaining price quotes. "Previously, customers had to contact a sales rep to receive a quote before booking a service," says Tiran. Now, shippers can conduct the whole transaction online.

In July, ZIM added a new feature to myZIM Personal Area, its portal for shippers. Called Draft B/L, it lets exporters view and edit their draft bills of lading online. The company also started pushing out location-specific news updates to users of its ZIM mobile application.

In August, ZIM introduced ZIMGuard, which scans shippers' cargo declarations and, using artificial intelligence and natural language processing, identifies hazardous cargo that has been misdeclared. Besides enhancing safety in transit, ZIMGuard shortens the overall response time during the booking and shipping instruction process, and helps shippers avoid fines due to incorrect declarations of cargo type or commodity, Tiran says.

Port of Montreal: AI and a Digital Twin

Digital innovation takes numerous forms at the Port of Montreal. In late 2019, for instance, the port enhanced its Trucking PORTal application with artificial intelligence (AI), giving the system predictive capabilities.

The Trucking PORTal, available on the web or as a mobile app, tells truckers how long it will take to retrieve containers at each of the port's four container terminals. Since 2016, the PORTal has provided current information on processing times.

The upgraded system also predicts waiting times during the next several hours by combining real-time data with historical trends and data on factors such as weather and vessel arrivals.

Information on processing time is especially valuable to dispatchers who plan truck movements. "If it's a transaction that could be deferred to the next day, and dispatchers see the display is red (indicating a current processing time of more than 75 minutes), then they will delay the transaction until things get back to yellow (60 to 75 minutes) or green (less than 60 minutes)," says Daniel Olivier, director of business intelligence and innovation at the Port of Montreal.

When dispatchers and drivers can plan to avoid slow periods, that reduces overall congestion at the port and ensures more reliable service for shippers.

In another initiative conducted in partnership with Centech, a Montreal-based business incubator, the Montreal Port Authority challenges startup companies to create digital solutions to problems at the port. If it likes a solution, the port could implement the technology.

In September 2020, the Port of Montreal won the Award of Excellence from the American Association of Port Authorities for a project that emerged from one of those challenges. Working with software developer PreVu3D and drone operating company ARA Robotics, the port developed a "digital twin"—a three-dimensional, interactive model of its entire property.

The port will use the digital twin in three ways: to create a visitors' center exhibit, help with engineering a new container terminal, and provide training simulations for its fire prevention crew.

"The AI algorithm scans the millions of lines of cargo contained on the vessel and identifies containers with COVID-critical cargo," Olivier says. "These containers are inside the port for 12 hours or less before they get to market."

Port of Virginia: Stacking the Deck

But ASCs are attached to overhead rails and grab containers from above. "They can build dense stacks of containers, five high," Harris says. "The ASCs let us squeeze more into the same space; the space between containers is less than shoulder width."

Another difference is that a straddle carrier operates like a truck, with a human operator inside, while ASCs are remote-controlled, with operators sitting in a central control center.

The computer system behind the ASCs determines how to continuously "groom" rows of containers so that—in the case of imported containers—each box progresses toward the spot where a truck will retrieve it. As the system determines a crane's next move, it displays that information to an operator, who executes the movement from a workstation.

Remote operation has been helpful during the COVID-19 pandemic. "We are able to keep working safely, partly because we can space out the operators in the building," Harris says. "And we can easily clean the workspace."

Because they pack more cargo into a yard, and because they optimize containers' positions, the ASCs boost efficiency at the port. The port has also seen less down time due to mechanical problems than it did in the past.

"The straddle carriers required maintenance all the time," Harris says. Six or 10 machines going out of service at once could slow the flow of cargo. But if several of the 86 ASCs need repairs, the port has enough extras to keep working, with no dip in productivity.

Along with the ASCs, the Port of Virginia's reservation system for truckers—in service for about two years—makes operations at the terminals more efficient, reliable, and predictable. All those improvements benefit shippers. "They know that we're moving on average, through the year, X amount of boxes per hour versus having huge swings," Harris says.

Data drawn from the port's digital systems can also reveal opportunities for improvement. "There are ways to use this technology to look at your operation and find new tweaks to increase efficiency," he adds.